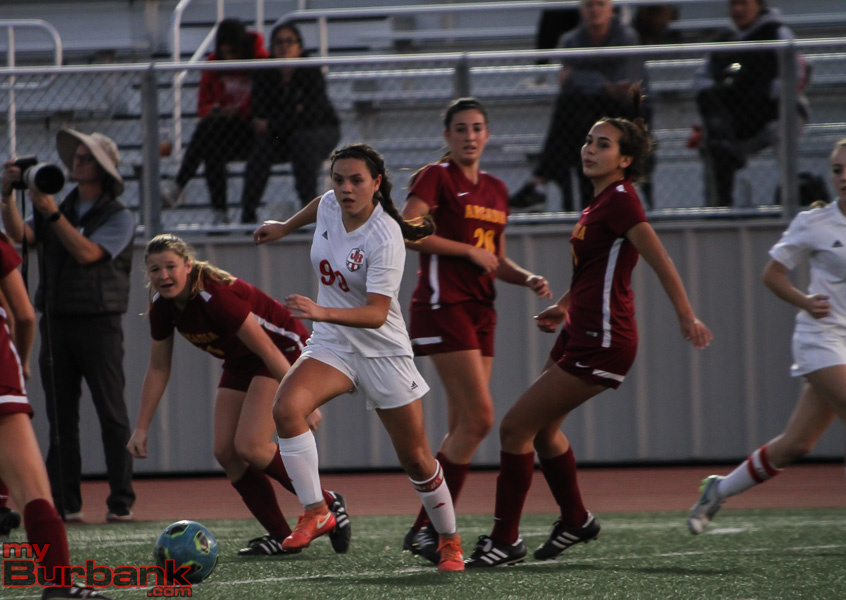 For a long time, the Arcadia High girls’ soccer team has been the bully on the block.

It appears the Apaches are still the team to beat in the Pacific League after Friday’s 2-1 victory over Burroughs at Memorial Field.

“There’s a reason Arcadia is the five-time league champion,” Burroughs coach Brady Riggs said. “They’re really, really good. You never want to lose, but you don’t mind losing to a good team. I was happy with our effort.”

The game-winner came with four minutes left when senior forward Hannah Mushisky drilled home a shot on a pass from junior defender Payton Thomas, who has agreed to play for the University of Oregon.

The Indians had one final attempt to even the match on a penalty kick with less than a minute left from senior midfielder Alondra Solis, but it sailed wide right.

“We’ve been explosive, but it was fun to watch us change our style,” Riggs said of the more deliberate offensive attack adopted on Friday. “They stayed disciplined and did what they had to do.”

Burroughs trailed at the intermission 1-0 on senior midfielder Valeria Mejia’s tally from 15 yards with 22 minutes left before the break.

The Indians (7-4-1 and 3-1 in league) evened it at 1-1 on a tally from senior Makena Sierra after a throw-in from junior defender Anna Kasper with 22 minutes remaining in the fray.

“We’ve been working really hard for this game,” said Sierra, a midfielder. “We just need to keep doing what we’re doing and I think that we can beat them the next time.”

Five minutes into the second half, Burroughs senior midfielder Mireya Gonzalez had an attempt from 10 yards and eight minutes later Mushisky’s shot failed to find the mark from 15 yards.

With 19 minutes left, Thomas was in front of the net, but her kick didn’t find the target.

Burroughs junior forward Tatiana Mosdale was in the box, but her smash from 15 yards also didn’t connect.

Arcadia (9-3-1 and 4-0 in league) had back-to-back attempts when Thomas let one fly from 35 yards and nine minutes left and Mushisky’s boot from 10 yards missed with six minutes left.

Arcadia opened the match with consecutive attempts as Mushisky drilled one from 15 yards and four minutes having elapsed that hit the top bar, followed by sophomore midfielder Amanda Howard’s kick from 20 yards, two minutes later that sailed high over the net.

A 15-yard attempt from Solis was scooped up by Arcadia junior goalie Anais Uriate as 32 minutes remained and Howard’s header with 29 minutes left on the clock also missed.

A 35-yard strike by Thomas with 17 minutes remaining was off target which was followed by unsuccessful Burroughs kicks by senior striker Emma Bartram from 20 yards with 16 minutes left, Gonzalez’s 15-yard blast with 15 minutes remaining and a 25-yard kick from freshman forward Trinity Vournas with 12 minutes showing.