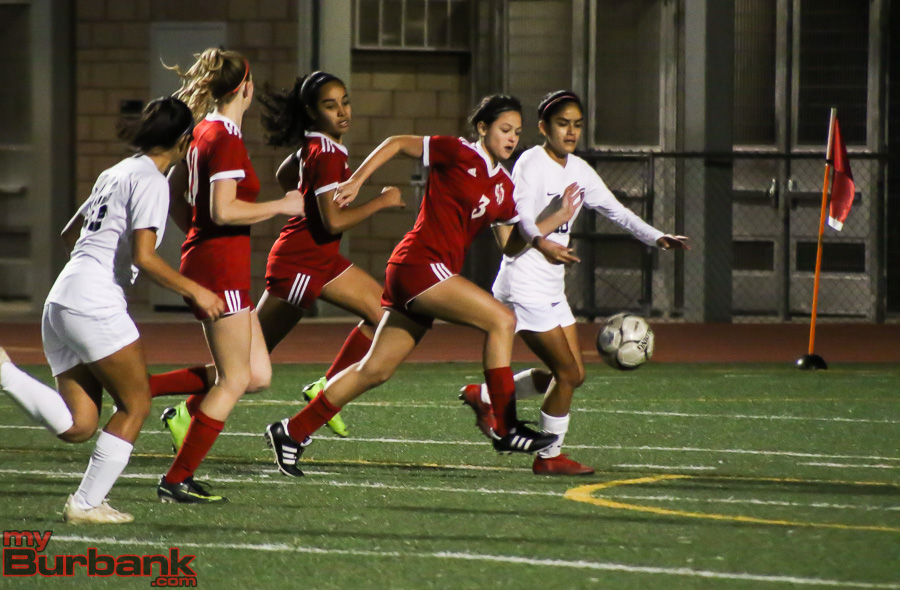 A junior, a sophomore and two freshmen accounted for all of the goals for the Burroughs High girls’ soccer team on Wednesday night at chilly and windy Memorial Field.

In short, the Indians were simply too fast, too good, too deep and too talented for Artesia in their CIF Southern Section Division IV first-round playoff match, winning 4-1.

“When we have the ball a lot, they’re either going to do one of two things,” Burroughs coach Brady Riggs said of the defensive set-up. “They’re either going to press us. Try to a play a high line like Burbank did or they’re going to park the bus. Well this team parked the bus. For the first 20 minutes, I think they had maybe one player at the 30-yard line.”

“We got a lot of shots. They were frustrated they didn’t get more goals in the first half,” said Riggs of his team. “We had a 2-0 lead and the next goal really matters.”

Freshman defender Samantha Valencia started off the scoring with a 32-yard free kick in the sixth minute for a 1-0 lead.

“I looked over and he [Coach Riggs] signaled to take a shot and I was like, okay,” Valencia said of her early tally. “I’ve done that in practice before. I normally don’t hit it from that far in a game and shoot it.  I was like, wow, that’s pretty good.”

“I had a lot of pressure and I was trying to blast it, but I didn’t get much of a foot on it, but it went in,” said Cashman of her goal.

Cashman knows that the defense is critical, especially in the postseason. “We have such a strong defense. Especially when we played Arcadia and CV during league, we had to make sure we had a strong defense,” she said.

The Indians placed first in the Pacific League, something they haven’t done since 1993 when they were in the Foothill League.

The lead ballooned to 3-0 in the 51st minute when freshman forward Megan Schmidt made a nice juke move 15 yards from the goal which brought out sophomore goalie Jizelle Velasquez.

Schmidt then tapped in a five-yarder for a 3-0 edge.

In the 55th minute, senior midfielder Abbie Riggs slammed a 45-yard free kick into the box which sophomore forward Lauryn Bailey retrieved, found room to navigate around players and then crushed a 20-yarder into the back of the net for a 4-0 cushion.

The Pioneers (12-6-5) avoided the shutout when senior Michelle Abarca knocked in a 15-yarder in the 57th minute past freshman goalie Kaylin Casper, who was otherwise perfect.

Sophomore midfielder Lily Gonzalez, who turned her right ankle in the opening half which required an ice pack, had a 15-yarder in the 30th minute that hit the left goal post.

Riggs then added a 46-yard free kick in the 32nd minute.

As of Wednesday night, it’s not certain whether Gonzalez will be able to play against Hemet on Friday.

Sophomore Stephanie Flores had a 35-yard free kick in the 35th minute for the Pioneers and teammate senior Celeste Rodriguez tossed in a 20-yard header in the 36th minute.

Bailey’s 20-yard attempt was scooped up by Velasquez in the 38th minute. Cashman had a 35-yarder in the 39th minute while Bailey’s 25-yarder caromed off the cross bar in extra time.

Abarca contributed a 35-yarder in the 42nd minute, Burroughs junior forward Trinity Vournas countered with a 25-yarder in the 46th minute and Rodriguez answered from 30 yards in the 60th minute.