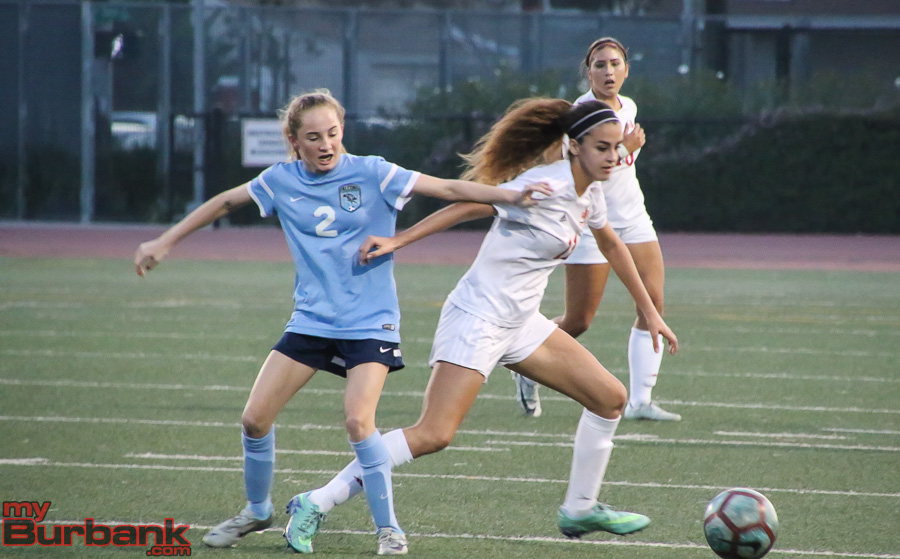 The Falcons had a pair of chances in the waning moments to pull out a win, but senior goalie Samantha Martinez stuffed out those threats.

Sophomore Faith Sales had a blast from 10 yards in the 80th minute for the Falcons (5-5-4 and 4-0-1 in league) and sophomore Kathryn Thamasian’s rebound also didn’t find the net.

“There was more focus during the second half,” Martinez said. “We had talked about how we were going to bring it out. In the second half we were much more motivated and I felt like we were working more as a team. With CV we’ve always had a rivalry. We both fought hard and we both wanted it. We have to bring it to them the next time.”

These two powerhouses will meet on Feb. 2 at Crescenta Valley with a 3:15 p.m. start.

Burroughs coach Brady Riggs expected a close match, but felt his team still should have won.

Riggs said it was tight throughout, as expected. “I think it was a pretty even game,” he noted. “It’s one of those games that could have gone either way. We don’t play to tie. A tie is not in our vocabulary.”

Sophomore midfielder Olivia Cashman delivered the final kick, a 20-yarder in the extra time for the Indians.

Crescenta Valley’s two goals came off the foot of freshman Chloe Ataya, including a 25-yarder from the right side in the fifth minute that settled into the left corner of the goal.

In the 44th minute, Burroughs pulled ahead 2-1 on junior forward Megan Rangel-Lynch’s five-yarder off a rebound.

Crescenta Valley then leveled it at 2-2 on Ataya’s 15-yard penalty kick in the 50th minute.

Ataya had a 15-yard tapper in the opening minute and a 25-yarder that sailed wide left in the third minute.

Senior midfielder Maddy Sena unloaded a 20-yarder in the ninth minute for the Indians, and was followed by Ataya’s 15-yard header in the 11th minute.

In the 18th minute, the Falcons’ Amy Rowe had a weak attempt from 25 yards.

Sophomore forward Trinity Vournas had a 20-yard boot in the 23rd minute for the Indians.

The Indians ended the first half with a Sena’s 25-yard kick drifting wide right in the 33rd minute and in the 39th minute, sophomore defender Orla Giffen’s 20-yard header also didn’t land in the net.

Rowe’s 25-yard kick in the 43rd minute opened the second half, and after each team scored that evened it at 2-2, Sales had a corner kick in the 56th minute.