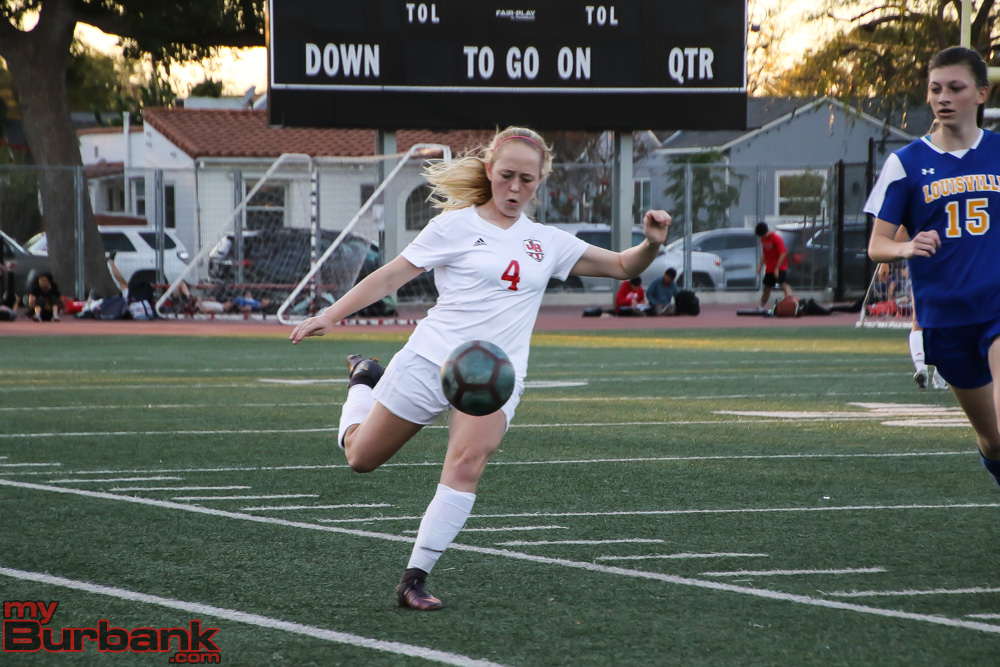 Two extraordinary plays in the second half of Friday’s Pacific League girls’ soccer match between Burroughs High and perennial powerhouse Arcadia were the centerpiece of a 1-1 tie at Memorial Field.

After a scoreless first half and the Apaches holding on to a one-goal lead, Anna Kasper’s match-tying tally from 21 yards in the 68th minute was a thing of beauty.

Standing on the left side and after contacting the ball with her right foot, it then climbed about 15 feet and soared, eventually nestling into the right corner of the net.

“It just felt like a meat ball. I hit the center of the ball and it went straight in,” said Kasper, a senior defender. “It was just slow motion. After every throw in, I had a chance. I knew it was going to come at some point. You just gotta keep trying. You can’t give up.”

The second spectacular play occurred in the waning seconds when out of the blue, junior defender Emily McHorney preserved the tie after running roughly 15 yards and knocking away Arcadia sophomore forward Bertha Guzman’s roller.

“My players never give up,” Kasper said. “I love them. Myself I was tired. My calves were cramping. Emily McHorney, she stopped it. She never stops.”

In that final attempt, the Indians (11-2-3 and 6-1-2 in league) wanted to clear the ball out of the box, but Guzman intercepted it and was ready to put in the go-ahead goal.

But in front of her stood senior goalie Samantha Martinez, and as the shot was taken, it slipped slightly past the keeper, but McHorney was able to cut it off a mere yard in front of the goal.

Prior to Friday’s match, the Apaches (8-6-2 and 6-0-2 in league) had knocked off the Indians, who were third in league last year, 10 straight times.

The first time these two league behemoths faced off, the Apaches prevailed 1-0. Currently Crescenta Valley is in first place in league with a mark of 7-0-2.

Arcadia took control 1-0 in the 50th minute on a tally from 30 yards by junior forward Amanda Howard.

“I’m really pleased with our effort,” Burroughs coach Brady Riggs said. “What can I say? We played great the whole day. We created a ton of chances in the first half. We couldn’t get one to go in. Tons of chances in the second half. Arcadia is five-time league champion for a reason. They’re tough to play.”

Burroughs had two of the next three shots including sophomore defender Orla Giffen’s 25-yarder in the 12th minute that sailed wide right and senior forward Catrina Villalpando’s 20-yarder in the 16th minute.

Sandwiched in between was Arcadia senior forward Jillian Damasi’s 25-yard attempt in the 13th minute.

Kasper’s 40-yard free kick in the 20th minute was true, but it hit the crossbar.

Burroughs senior defender Natalie Celio added a 15-yarder after a corner kick from Villalpando in the 20th minute and sophomore midfielder Olivia Cashman tossed in a 10-yard header in the 23rd minute for the Indians.

Arcadia sophomore defender Theresa Gardner had a 20-yard boot in the 35th minute that scooted wide left and Kasper’s corner kick was taken in the 38th minute.

The second half opened with Villalpando’s 20-yarder in the 41st minute that was followed by a flurry of kicks from the Indians.

A minute later, Cashman’s 10-yarder found the crossbar and Villalpando’s boot from 10 yards in the 43rd minute, failed to find the mark.

A potential goal in the 45th minute by the Apaches was thwarted by Martinez as Rosas’ 10-yarder was stopped, but Arcadia senior forward Madison Zordilla then took the rebound and also failed to find the back of the net.

The two then divided the final four kicks including Cashman’s 45-yarder in extra time and Villalpando’s 35-yarder also in extra time.