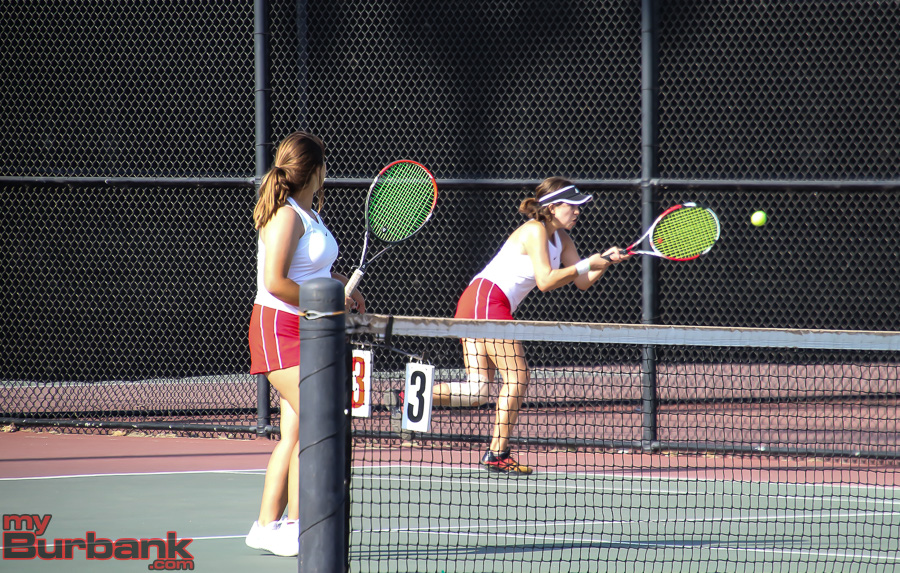 Often times a tennis match or even a scrimmage can be very useful because it allows an individual to know just what to expect the next time they’re on the court.

This clearly helped the visiting Nitros settle down and play with confidence and at a high level as they grabbed six points in singles and doubles action and came away with a 12-6 victory.

Bernhardt said he was satisfied with two of his three doubles teams.

Bernhardt added: “We were supposed to play Saugus and I think Hart and Alhambra and it just didn’t come off,” he pointed out.

“I was definitely expecting closer set scores,” Khachiki said of the improved Burroughs squad. “We’ve played well these other past two years so we want to continue our reputation. I don’t think there’s a limit to how well we can play so hopefully we continue to improve.”

Khachiki continued. “I think we’re playing a lot more competitive each match and we’re learning from each match,” she said.

Tom Gossard is Glendale’s coach and said in his opinion, Khachiki is the team’s Most Valuable Player the last two years.

“It gives me a lot of confidence, but it’s also a lot of pressure to uphold,” she said of Gossard’s assertion. “I just try to play my game each time and not worry about what’s going on off the court.”

Three played at No. 2 for Glendale, which captured the only girls’ title in the school’s long history, a CIF Southern Section Division IV championship in 2017, and they included junior Annette Petrosyan, senior Sara Rahimi and junior Suzanna Poghosyan.

Only Rahimi managed to pull out a win, 6-1, over Harris-Bermudez, while sophomore Lauren Pieri prevailed 6-1 over Petrosyan and Shane won 6-1 against Poghosyan.

At No. 3 for Glendale was sophomore Ani Harutyunyan, who defeated Harris-Bermudez 6-3 and Shane 6-1, while Pieri was victorious 6-3.

The Indians No. 1 team of senior Alice Weber and senior Suzy Kim prevailed 7-6 (7-3) over Avakian/Guzman.

Glendale’s No. 3 squad of senior Janet Louie and senior Anna Sarookhanian nabbed two points as they held off Muga/Brahms 6-4 and Munguia/Glaim 6-4, while Weber/Kim won 6-0.