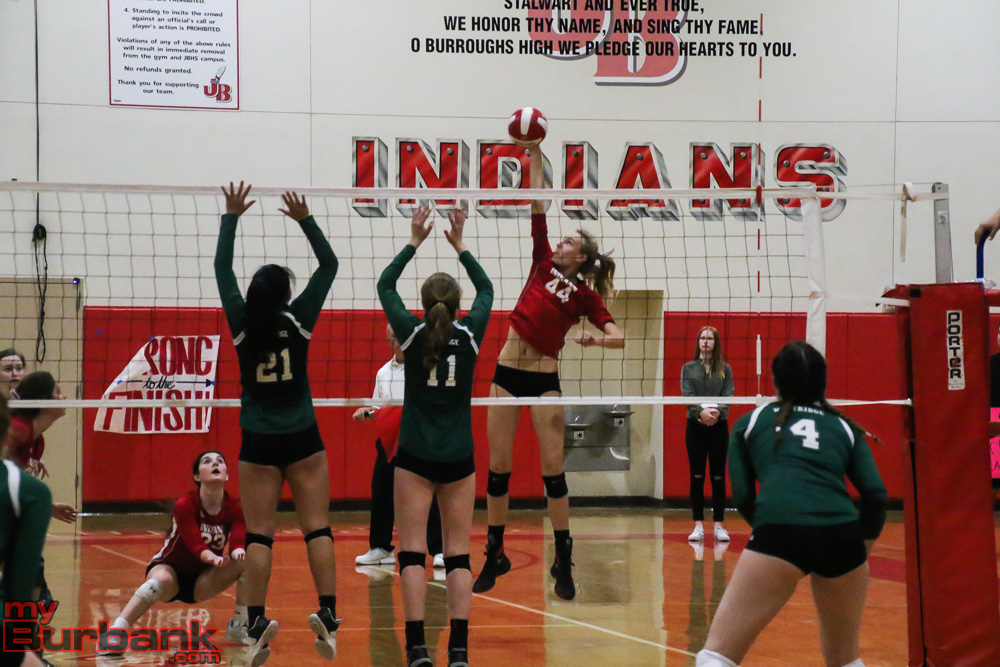 Try as they might, the Burroughs High girls’ volleyball team came up just short in its CIF Southern Section Division III second-round playoff match against visiting Westridge on Thursday night.

“We felt pretty good, but we knew that the other team would fight and we got stuck in a couple of rotations and ball control was suspect all night,” Burroughs coach Edwin Real said.

The fifth and decider was tied at 2-2 on senior outside hitter Marin Grote’s kill and 3-3 on Westridge freshman opposite/hitter Kathleen Chen’s net serve.

The Tigers seized control and led 11-7 on a winner from senior opposite/outside hitter Makana Meyer.

Westridge went on a 4-2 spurt and captured the set and match when senior opposite hitter Jewel Musich’s shot missed the target.

After dropping the opening game, the Indians (24-7) rallied and took the second set.

Burroughs drew within 12-9 on Grote’s dagger, but Chen’s tapper made it 15-9 as the Indians called time out.

“It was a tough loss,” said Grote, who will sign a letter of intent to play volleyball with the University of Washington on Nov. 8. “Overall I’m very pleased with how the season went. I’m so happy to be a part of this team. There was a lot of growth as a team and as individual players progressing.”

Burroughs went on a 5-0 blitz that was capped off by Grote’s stuff that evened it at 15-15.

The Indians burst ahead 17-16 on a winner from junior opposite hitter Juliana Van Loo.

Van Loo’s tapper made it 18-16 while sophomore outside hitter Lydia Grote’s kill pushed the advantage to 19-16.

Burroughs seized control of the third set after leading 8-4 on Marin Grote’s spike and 14-10 on Patenaude’s service ace.

It became 20-11 on a kill from junior middle blocker Maggie Harris and 23-12 on another smash from Harris.

The Indians then took two of the last five points including junior outside hitter Lauren Baydaline’s serve that hit the net as they led two games to one.

Close early and late, the fourth game saw the Indians lead 8-6 on Lydia Grote’s kill and 13-11 on Marin Grote’s wallop.

Lydia Grote’s winner made it 17-14, but the Tigers roared back and led 22-20 on senior middle blocker Eryn Boken’s ace.

The Tigers claimed three of the next four points including sophomore libero Krystal Raymundo’s kill that evened the match at two games each.

The initial set went to Westridge which led 7-3 on Martinez’s ace and caused the Indians to ask for time.

Martinez’s kill made it 12-10 and Raymundo’s service ace pushed the advantage to 15-10.

When Martinez tacked on a spike it became 16-10 as Burroughs requested yet another time out.

Westridge darted ahead 24-16 on Meyer’s dagger and took the set on Martinez’s spike.