Crisp passing and solid sets to capable hitters has made the Burroughs High girls’ volleyball team so potent this season.

All were on display Saturday night when the Indians took on Notre Dame Academy in a CIF Southern Section Division III second-round playoff match at Crescenta Valley High’s gym. 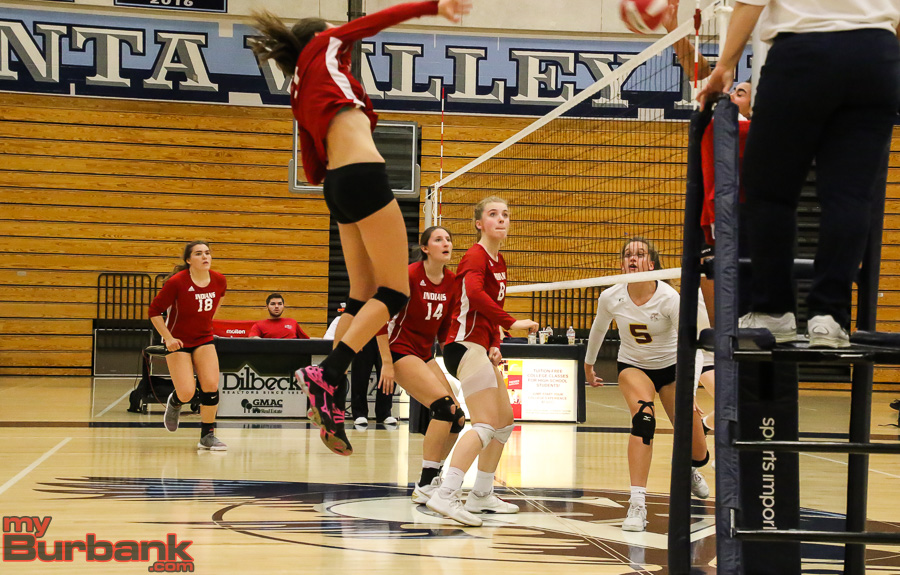 Lydia Grote is high off the floor during a CIF second-round sweep of Notre Dame Academy. (Photo by Ross A. Benson)

“We didn’t play up to our potential in the first round,” Burroughs coach Edwin Real said of a four-set win over University on Thursday. “When we get the ball to the setter, we did a pretty good job. Shea [McGovern] did a good job tonight of getting the ball to the hitters.”

The game-winning set began with Notre Dame Academy jumping out to a 3-0 lead on an ace from Katy Escun.

But the margin evaporated when Burroughs (26-8 and 13-1 in the Pacific League for a first-place tie with Arcadia) evened it at 5-5 on a service ace from freshman libero/defensive specialist Charlotte Hobson.

It became 10-6 on back-to-back kills from senior opposite hitter Juliana Van Loo, who had 16 kills, 14-10 on McGovern’s quick-push and 16-11 on junior outside hitter Lydia Grote’s winner.

“I feel like I felt more pumped up for this game because it was the second round and we keep going,” said McGovern, a senior setter. “I think we’re really good and I think this team is going far. That’s our goal to win the CIF, for sure.” 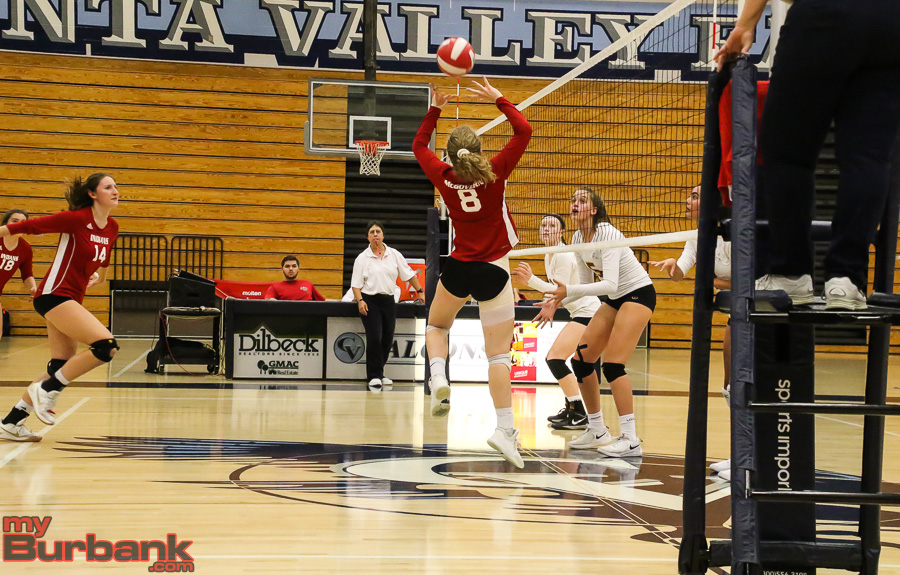 Burroughs senior Shea McGovern is a master setter. (Photo by Ross A. Benson)

Notre Dame Academy bounced back and drew within 16-13 on a kill from Lucia Folsey.

“They’re a good team, but we got on them quickly,” Real said. “We were in a tournament [with Notre Dame Academy]. It was a different atmosphere. It was a Saturday tournament. I wasn’t worried about losing to them the first time. We’re a better team now.”

Consecutive spikes from Grote made it 18-13.

Grote’s smash put the Indians, who have won 14 of their last 17 matches, ahead 21-18 and when senior opposite hitter/defensive specialist Jolene Soliman sent in a service winner, the set and match was concluded.

After the Regal Gryphons took a 2-0 lead on Escun’s ace in the opening set, Van Loo’s kill shoved the Indians in front 8-6. 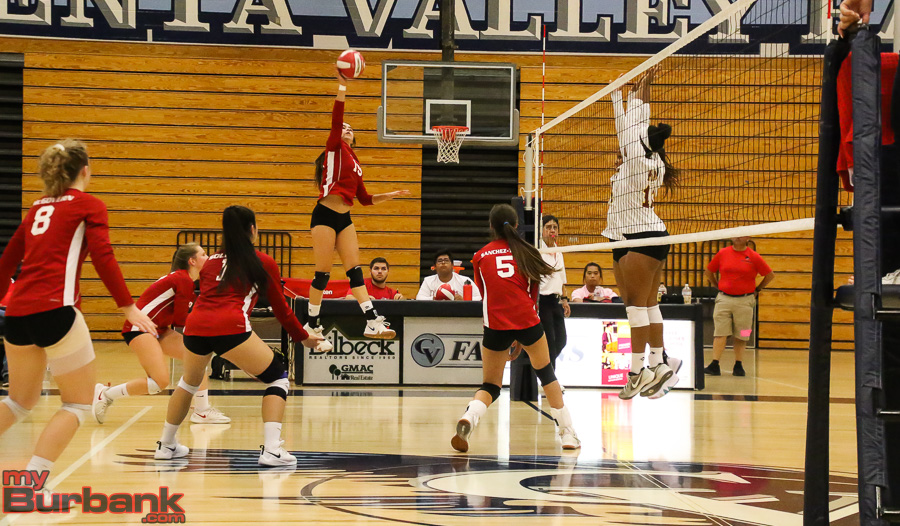 Catie Virtue pumped in eight kills in a sweep of the Regal Gryphons. (Photo by Ross A. Benson)

“Our team is very consistent and we all know that consistency is the way that we get to a play,” said Grote, who dropped in 16 kills. “We can’t get to a play without a good serve. Get the ball in the court and we can handle the rest. We just have to start with a good serve and we work on that in practice.”

The Regal Gryphons outscored the Indians 5-2 and came within 20-15, which was capped on an ace from Jasmine Lucas. 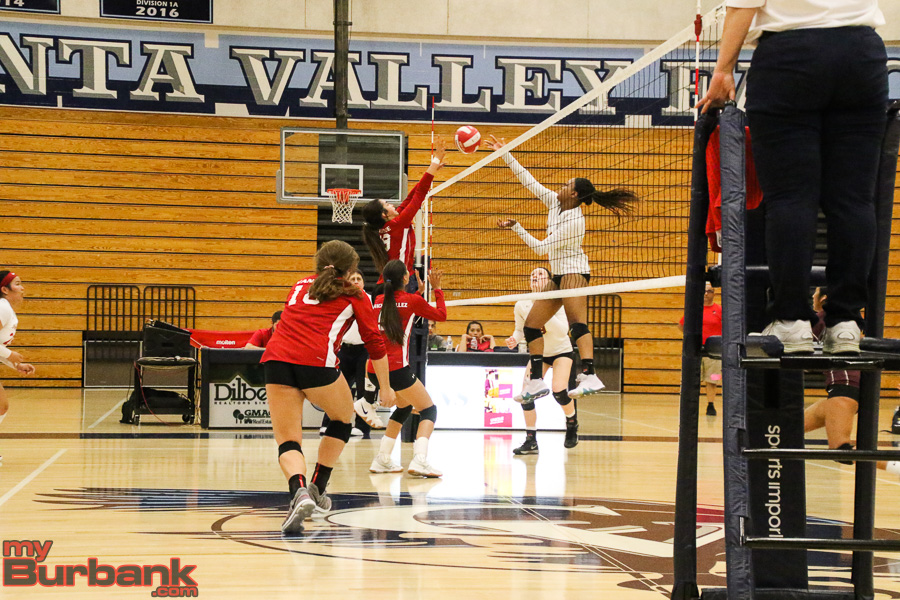 Net play is always crucial and it was during Saturday’s sweep. (Photo by Ross A. Benson)

Burroughs muscled its way in front 22-16 on Van Loo’s kill and darted ahead 23-17 on a kill from sophomore designated specialist Lily Rogers.

The frame came to an end when Folsey hit a serve that spilled out of bounds.

In the second game the Indians led 4-1 on Grote’s tapper. A kill by Van Loo had the Indians ahead 8-4.

“I think if you look from the start of the season till now, I think we’ve had the most growth of any team that Burroughs volleyball has ever had,” Grote said. “Even these past two weeks, we’ve all been working so hard on what we call sell-out plays which is going for the ball you can’t get, but get a touch on.”

Burroughs led 15-6 when Grote added another kill, but the Regal Gryphons battled back and cut the deficit to 16-10 on a kill from Melissa George.

Sophomore outside hitter Catie Virtue’s tapper made it 18-10 and when Folsey’s attempt tickled the net, it was 20-12 as Notre Dame Academy asked for time.

A Virtue (eight kills) tapper put the Indians in front 23-13 and when Grote rifled a clean winner, Burroughs pulled ahead two sets to none.