Taking to the road is usually a tough act, especially during the CIF Southern Section playoffs where the competition is keen.

The Burroughs High girls’ volleyball team was extended to five sets against host Los Osos on Thursday night in a Division III second-round match, but still prevailed, 21-25, 25-18, 25-23, 23-25, 15-11 and now have a date at home on Saturday versus Foothill in a quarterfinal match with a 7 p.m. starting time.

This is the second consecutive season in which the Indians have reached the quarterfinals. 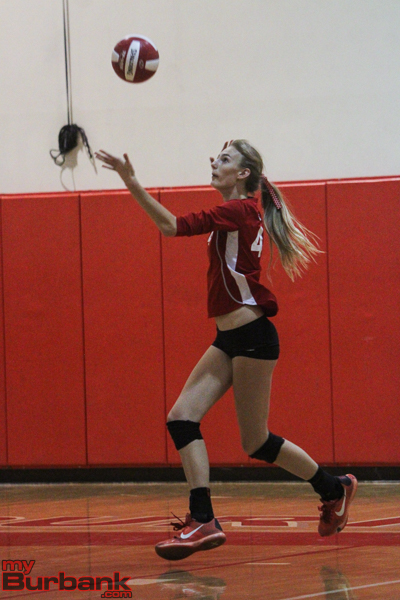 Marin Grote, shown in a CIF opening-round match versus Dos Pueblos, had 27 kills against Los Osos in a win on Thursday. (Photo by © Ross A. Benson)

Despite the record, the Grizzlies (16-16) proved to be a rugged and determined foe, which should serve Burroughs well for its next match.

Leading the way were the usual suspects and they included junior outside hitter Marin Grote, who had a match-best 27 kills, while senior middle blocker Caleigh Paster tacked on 12 and sophomore outside hitter Juliana Van Loo added 10 kills.

Grote, who contributed 18 spikes in an opening-round victory over Dos Pueblos and Paster were able to play above and beyond in the deciding set.

In the fifth, Grote tallied six kills while Paster was extremely efficient as they spearheaded the action.

“It was very competitive early on, but we came on late in the first set and that carried over into the second and third,” Burroughs coach Edwin Real said. “They took the fourth, but then we closed it out in the fifth game.”

After dropping the first set by five points, Burroughs (22-9) stormed back and was able to get into a groove in the second and continued that momentum in the third set.

Los Osos then captured a tight fourth set, but then had trouble in the fifth and deciding game.

When Real was asked if he ever felt that the Indians wouldn’t win, he said that he was fairly sure they would prevail.

“It was nerve wracking, but the team was focused and I was confident that we were going to win.”