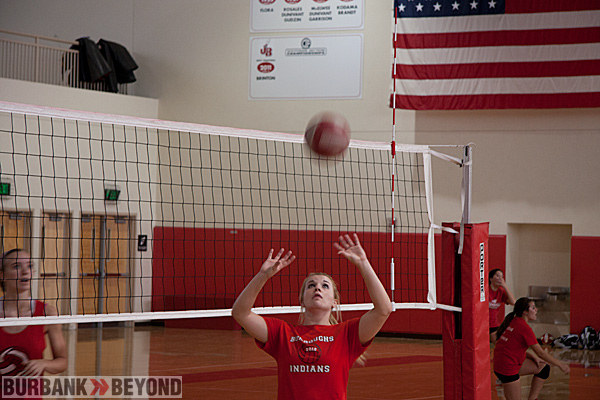 As the season begins for the Burroughs girls volleyball team, two immediate questions pop to mind. Will the Indians repeat as Pacific League champions and can JBHS replace the talent of Megan Stephenson, last year’s All-CIF and Pacific League Player of the Year?

Only time will tell when answering those questions. What we do know is that Burroughs returns six lettermen including four starters off a squad that went 19-4 and undefeated (14-0) in Pacific League action.

“We have more than just one weapon so teams can’t sit on one player. This year we are versatile,” Burroughs Coach Edwin Real said. “Teams have to play defense against all our kids and not just against one. We have the nucleus but we just need a little bit more intensity each day in practice and in each match. The team gets along well which is very important.”

Opponents keyed on Stephenson last year but had little success against a strong Indian squad who advanced to the second round of the California Interscholastic Federation playoffs. This year’s team, ranked No. 5 in CIF Division II-A, will rely on multiple players in their quest to win back-to-back league titles for the first time since 1978-79.

Senior middle Laura Howard returns as a three-year starter and the catalyst for the team.

“Laura does everything well,” Real said. “She blocks real well; her jump serve is hard to return and her passing is excellent.”

Joining Howard as the other middle will be junior Caitlin Cottrell who became stronger over the summer and a more consistent player.

“Our middle blockers hit and block well,” Real said. “We need to establish our other hitters even more. If we do, then we will be even better. Defensively we are pretty solid.”

Seniors Autim Kanoho and Tori Adams will be looked upon to step up in those roles.

Keana Figueroa, a three-year letterman, returns as the Indians setter. Real describes the junior as “a competitor who has a fierce serve and is a consistent setter.”

Burroughs brings back junior Dani Gonzalez, a back row specialist who came off the bench last year. This season she moves to libero in a starting role. Gonzalez worked on her passing a lot in the off-season in an effort to solidify a vital area for JBHS.

Keep an eye out for freshman Danielle Ryan, an outside hitter with lots of potential.

“She does everything,” Real said. “She can play defense, she can swing and she can block.”

After a highly successful season last year, Burroughs has set the bar high and is intent on being committed to excellence.

“We want to instill in our players to be excellent in all aspects of life not just volleyball,” said Real, who begins his 10th season at the helm. “They are in the classroom all day but when they step on the court they have to commit themselves to being focused. Being excellent on every single play. Everything they do must be committed to excellence in order to be successful. This fall we made significant improvements.”

The Pacific League title is up for grabs with Burroughs, Arcadia and Burbank expected to be in the mix.

“Arcadia and Burbank both should be good. We will be ready for them when the time comes,” Real said. “I think Pasadena is a team that could sneak in there. They are tall and return a lot of players.”

Burroughs plays its home opener on September 13 vs. Hoover at 3:30 p.m.