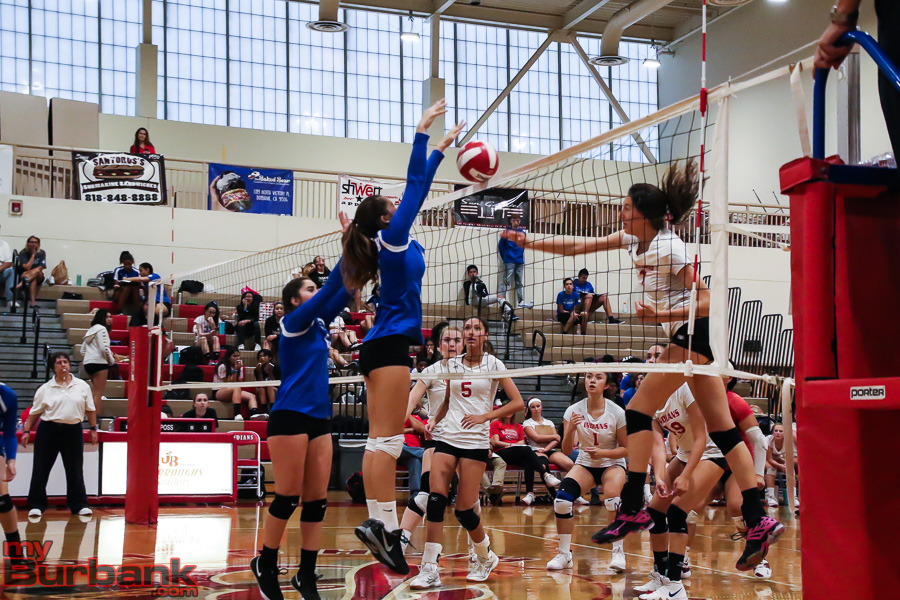 Over the last seven matches between the Burroughs High and Burbank girls’ volleyball teams, the Indians have won every one, including Tuesday night’s 25-12, 25-22, 25-18 Pacific League win.

With junior outside hitter Lydia Grote showing the way with a match-best 14 kills and senior opposite hitter Juliana Van Loo chiming with seven, the host Indians were dominant.

In the third and final set, Grote opened up with four consecutive kills and Van Loo added two aces.

“In the third set my focus was mainly to play smart,” Grote said. “I knew their setter was front row so I could hit mine better. But I can’t do that without a pass.”

Grote said the team needed to remain calm. “We know what to do and we just gotta focus on our side of the court and not theirs,” she said.

But the Indians (7-3 and 6-1 in league) moved in front 12-7 on a service winner from sophomore defensive specialist Lily Rogers, who had 12 aces.

A kill from Van Loo made it 16-10 and a spike from sophomore outside hitter Catie Virtue (five kills) pushed the lead to 20-15.

“We always gotta focus on the opponent and get off to a fast start because it’s a rivalry game,” Burroughs coach Edwin Real said. “Our energy was at a high level.”

There was a slight dip in the second set for the Indians. “We get into the habit of letting teams get runs on us,” Real said.

The Indians took the set and match on an ace from freshman libero Charlotte Hobson and a kill from Van Loo.

The match opened with the Indians pulling ahead 9-1 with an ace from Rogers and Grote adding three kills.

When senior libero Caitlin Kim delivered an ace, the Indians marched ahead 18-7.

Van Loo’s kill made it 20-7 and Van Loo’s dagger pushed it to 21-8. The final two points came on a kill from Grote and a tapper from senior setter Shea McGovern.

Burbank played its best set in the second and led 20-17 on a kill from senior outside hitter Amaya Broyls, who had three digs and two kills.

The Indians came within 20-18 on a tapper from Virtue and 22-20 on a kill from junior middle blocker Camila Sanchez-Tellez.

Burroughs drew within 22-21 when Rogers served an ace. Another ace from Rogers tied it at 22-22.

“We were pretty relentless in the second set, not giving up,” Burbank coach Karl Rojo said. “Maybe that five-point run that we let up toward the end of the set really killed us?”

Rojo added: “I thought we did fairly well,” he noted, “but we would have done better if we passed better, obviously.”

Sanchez-Tellez and McGovern combined on a block to give the Indians a 23-22 edge and Rogers closed it out with back-to-back aces.