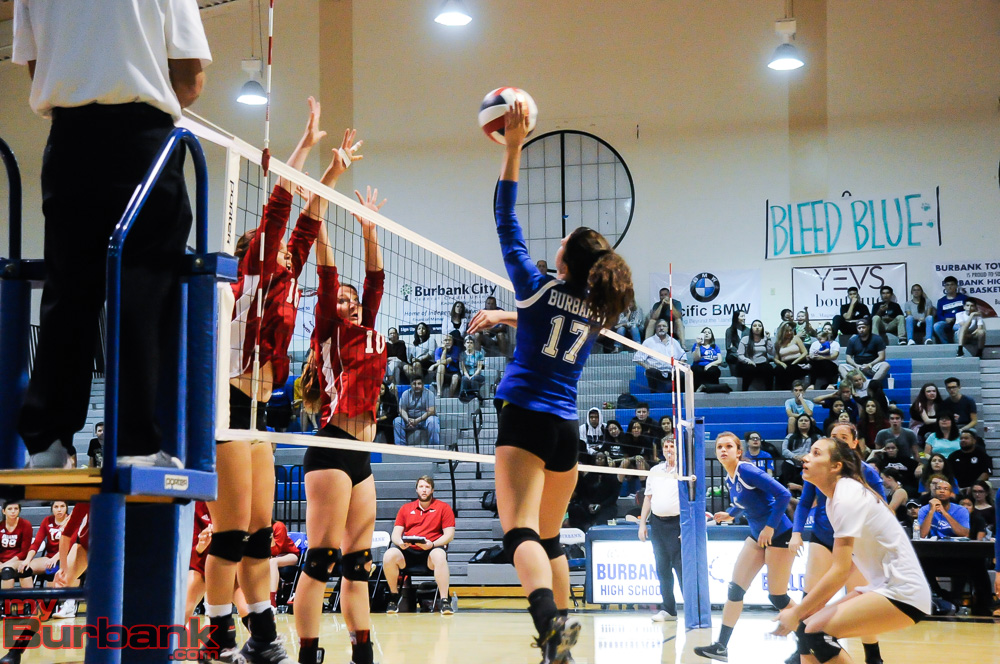 City bragging rights, Burbank High hoping to keep sole possession of first place in the Pacific League and Burroughs wanting to make it a three-way tie for the top spot along with Arcadia were all on the line Thursday night when these longtime rivals met in a girls’ volleyball match.

The visiting Indians came out strong, something Coach Edwin Real wanted, and partially because of this early charge only three games were needed, 25-11, 25-12, 25-23, in order to deal the Bulldogs a defeat.

Burbank and Burroughs will meet once again on Oct. 24 at the Indians’ gym with a 6 p.m. start.

Burbank trailed throughout the third game, but came within 20-19 when senior middle blocker Ricki Patenaude’s shot found the net.

Another point for the Bulldogs would have evened it, but Van Loo’s kill made it 21-19.

Burbank didn’t give up as it drew within 22-20 on a kill from senior outside hitter Melissa Daniel.

“We weren’t keeping it simple in terms of what plays we were running in terms of passing,” said Daniel, who had nine kills. “We were shanking balls left and right. We were thinking too much when we were playing instead of just playing.”

When senior opposite hitter Erin Lashkari served up an ace, the Bulldogs (12-2 and 6-1 in league) climbed within 22-21 and leveled it at 22-22 on a sizzler from Daniel.

When senior opposite hitter Suzy Torosyan added a spike, Burbank pulled into the lead, 23-22, as the Indians asked for time out.

But Grote’s bullet evened it at 23-23 and senior libero Sabrina Sullivan’s service ace made it 24-23.

The match clincher came when Burbank used four touches in order to get the ball across the net according to the referee, with Grote standing in front and ready to pounce.

“In practice we’ve really been drilling strong starts,” said Grote, “so I think we had that under our belts as well as our team came in focused. We came here to win and that was our job and we did it.”

Van Loo’s tapper put Burroughs, which has now defeated Burbank five consecutive matches, in front 9-6, but Daniel’s spike saw the Bulldogs get within 10-8.

“We just did not play well tonight,” Daniel said. “We made too many errors and it just came down to that. We missed a lot of serves. We were not strong in service games.”

Burroughs opened the initial stanza by claiming 11 of the first 14 points that included a tapper from junior middle blocker Maggie Harris which prompted Burbank Coach Karl Rojo to ask for time.

“Our sense of urgency wasn’t really there the first set, second set,” Rojo said. “We didn’t live up to our serving standards. Too many in the net. Giving away too many points. We didn’t start with that sense of urgency. Couldn’t get our momentum right.”

Rojo went on: “You can kind of call it some sort of complacency the last couple of weeks,” he said. “That’s also a battle that we’re trying to overcome in practice, too. That complacency, when we play teams that aren’t as tough as we want them to be.”

The Indians seized control 15-6 on a kill from Patenaude and 16-7 on Grote’s bomb.

When junior opposite hitter Shea McGovern (four aces) unloaded three straight aces the lead swelled to 20-8 and it became 21-8 and 23-8 on a pair of Grote kills.

It was more of the same in the second game as the Indians captured the first five points before Daniel’s kill broke the spell to make it 5-1.

Burroughs took over 12-5 and 15-7 on kills from sophomore outside hitter Lydia Grote.

The Bulldogs rallied and shaved the lead to 17-10 on Lashkari’s kill, however, Marin Grote had back-to-back bullets that made it 20-10 as Burbank needed a respite.

Senior libero Lizzy Jessen’s service ace gave Burroughs a 23-12 lead and the Indians then took the next two points.