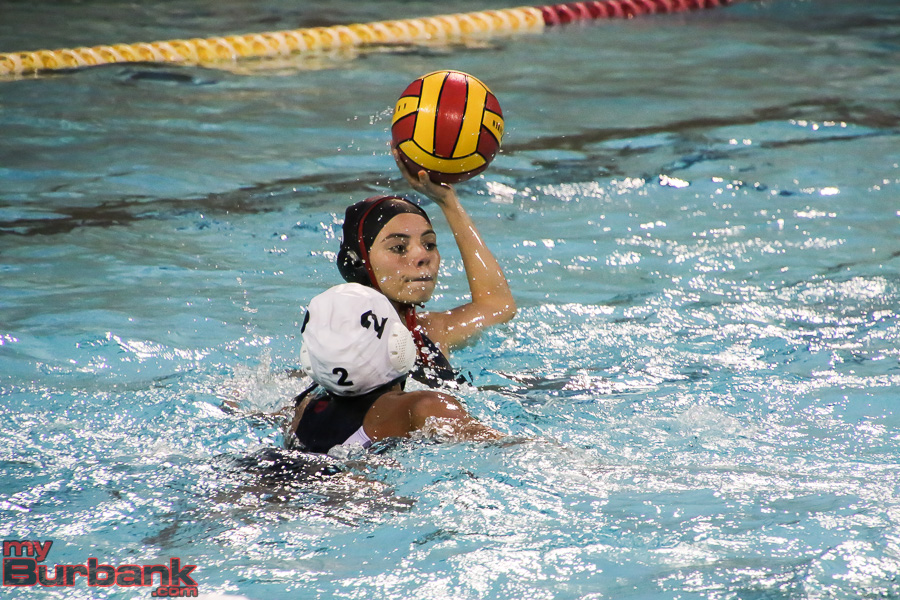 For the Burroughs High girls’ water polo team on Tuesday night, it was all about in-your-face defense.

So overwhelming and sure was this applied to visiting Nipomo during a CIF Southern Section Division VI first-round playoff game, it helped the Indians prevail 14-3.

The Indians (11-5 and 6-2 for second place in the Pacific League) will now host Walnut on Thursday at 5 p.m. in a second-round encounter.

“Overall it was a good team effort,” said Turla of the defensive that at times prevented the Titans from even getting off a shot. “Both offense and defense. It really motivates us to try harder.”

The initial goal came with 5:30 left in the first quarter when Turla, with an assist from junior utility Aleah Orozco, unloaded a six-footer.

When Flores dented the back of the net from eight feet and 3:32 remaining in the opening frame, the Indians’ lead became 2-1.

With 57 seconds left in the same stanza, Flores tossed in an eight-footer that made it 3-1.

Burroughs’ first-quarter barrage was capped off with an eight-footer and 21 seconds left from senior setter Bianca Sanchez with an assist from Orozco.

Sanchez’s goal from five feet with 6:16 showing in the second quarter made it 5-1 and with 4:23 left on the clock before halftime, Orozco’s 12-footer with an assist from Turla pushed the lead to 6-1.

Turla’s goal from eight feet with an assist from Flores made it 7-1 with 3:48 left in the second period.

Twenty-five seconds later, an eight-foot bullet from Sanchez with help from Orozco made it 8-1 and forced Nipomo (13-8 nd 7-2 for third place in the Los Padres League) to ask for time out.

“They were keeping the press tight,” Cook said of his overwhelming defense. “They were going from steals right off the passes from the goalie. They were playing really well and really on top of it.”

Cook also liked that multiple players found the back of the net. “Really balanced scoring,” he said. “That’s always good. We have threats everywhere.”

Burroughs then glided in front 9-1 after Orozco, with an assist from Sanchez, launched an eight-foot dart and 2:07 left before the break.

Burroughs ended the opening half with a 12-footer from Flores that pushed the lead to 11-2 as Orozco tossed in an assist.

The only goal that the Indians scored in the third quarter came with 2:04 left when Flores found the back of the net for a 12-2 cushion.

Turla added a pair of goals in the fourth quarter and they came with 2:31 showing from eight feet that made it 13-2 and a 10-footer with 21 seconds on the clock for a 14-3 edge.

Junior Isabella Erickson and sophomore Emmanuella Nathan were both stellar in goal for the Indians.

For the visiting Titans, Carly Billinger showed the way after tallying two goals with an assist.

Billinger’s goal from 10 feet with 4:26 left in the first quarter evened it at 1-1 and her tally from five feet with 34 seconds left in the match trimmed Burroughs’ lead to 14-3.

Billinger’s assist with 1:10 remaining in the opening half sliced the Indians’ advantage to 10-2.