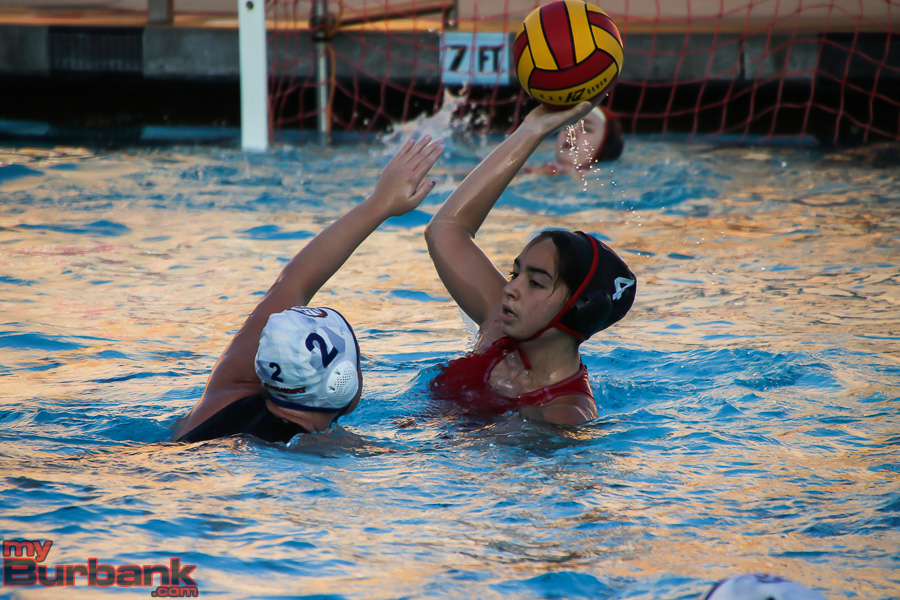 If defense truly wins championships, and it does, then the Burroughs High girls’ water polo team should be fine.

On an afternoon in which the Indians claimed their first win of the season on Tuesday over visiting Clairemont 5-4, in a nonleague match, it was in dramatic fashion.

Clinging to a one-goal lead, Emanuella Nathan blocked two close-range shots in the span of 10 seconds in the waning moments and saved the day.

“I’m very like dialed in,” said Nathan, a junior goalie who had 24 saves. “I’m trying to direct the defense. So that’s my job. I try to look at the ball and look around and to just keep an eye on things. If I see someone open. I’m the chess player.”

Nathan talked about how see approaches her position and what she does when the offensive player is in front of her.

Nathan said that this is one of her strongest efforts. “This is probably one of my best out of his high school so far,” she said. “I had a really good one last year. Definitely one of my best this year.”

The effort did not escape Burroughs coach Jacob Cook. “Emma had a huge game. She was a major help on defense,” he said. “She saved us for sure.”

Cook liked the entire team effort, but a couple stood out. “Aleah [Orozco] had a big game and Amy [Berberyan] had the goal that put us up,” he pointed out.

When it comes to scoring, this is Orozco’s specialty, as the senior knocked home a match-best four.

But what turned out to be the game-winner was a 20-foot rainbow with 2:26 left in the fourth quarter turned in by Berberyan that made it 5-4.

The scoring began with 5:46 left in the second quarter when Orozco dropped in a tally for a 1-0 lead.

“I think honestly we became more intense during the last quarter because we thought that it was going to be such a close game,” Orozco said.

“We had a lot of doubt in the beginning considering this is a team from San Diego,” Orozco said. “I guess we came in just giving it our all. Emma brought our team together. She was amazing.”

The edge expanded to 4-1 with 6:37 left in the third frame as Orozco’s 10-footer found the back of the net.

The Chieftans (0-1) sliced the lead to 3-1 when Ella Denny’s close-range attempt found the goal with 1:02 left in the second period.

Clairemont inched closer at 4-2 when Denny’s six-footer found the range as 5:46 remained in the third quarter.

Denny’s tally from six feet and 5:17 on the clock sliced the lead to 4-3 and Ashlynn Sauerwein’s point-blank attempt with 2:51 left evened it at 4-4.

“We just gotta work on our offense. Our defense was great today. It’s early in the season. That’s why we came here,” Kienle said.