In the blink of an eye, the host Burroughs High girls’ water polo team established an early lead over city rival Burbank on Thursday afternoon and never looked back en route to a 13-3 Pacific League triumph.

The Indians forged a 4-0 opening-quarter advantage and then tacked on four more goals in the second period for an 8-1 cushion.

“They came out early and really stepped it up,” Burroughs coach Jacob Cook said. “They’re always up for it [the rivalry]. When you’re up by four, you feel comfortable.” 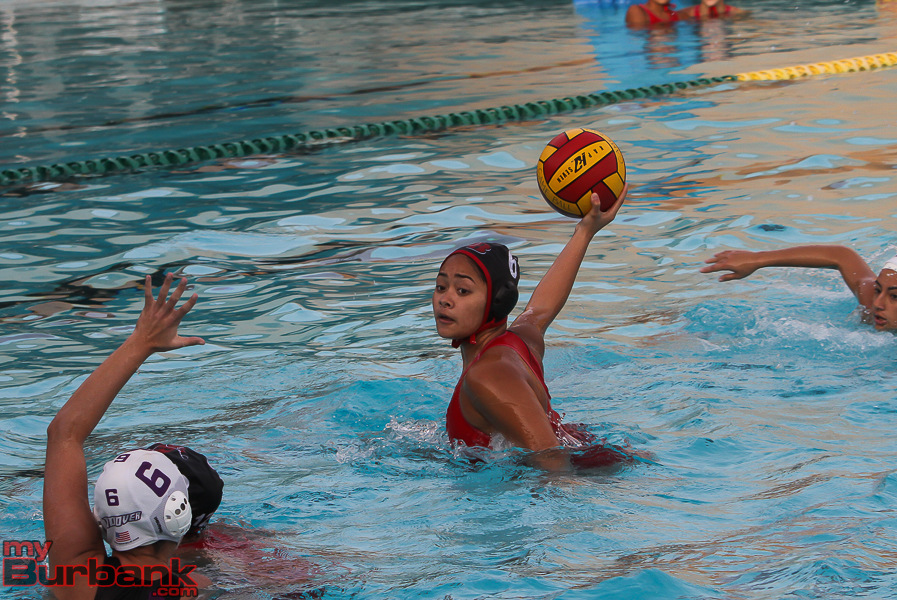 Junior driver Gwen Turla, shown here in a match from last season, unloaded four goals in a 13-3 win against rival Burbank. (Photo by © Ross A. Benson)

Because of the early lead, Cook was able to go to his bench and they also played at a high level.

“We used every player and we don’t have a falloff,” he pointed out.

The Bulldogs received two goals from senior driver Cynthia Abramian in the final period and a solo strike by sophomore driver Michelle Morlock in the second quarter.

The Indians (6-6 and 1-1 in league) built a 1-0 lead on a 10-foot dart from Sanchez with 4:45 left in the initial frame and extended the margin to 2-0 on Turla’s winner from five feet with 4:14 left against senior goalie Clare Griffin.

Burroughs’ lead became 3-0 with 1:07 remaining in the opening frame on a shot by Sanchez from 10 feet with 16 seconds showing and Turla’s bullet from five feet made it 4-0.

“Our defense was really good,” Silva said. “We understand what we’re doing on defense. I have confidence in my team.”

Burbank (3-11 and 1-1 in league) reduced the lead to 8-1 when Morlock found the net from close range with 20 seconds left before the half.

“I know we’re a better team now than in the beginning of the season,” Burbank coach Allyson Young said. “We’re playing much better. I can tell because we didn’t shut down and we played hard. I liked the effort they gave.”

The only goals scored in the third quarter came via a shot from senior Allison Schamber from five feet with 2:24 left and sophomore Aleah Orozco’s toss from 15 feet as 1:04 remained.

Burroughs responded with senior setter Elizabeth Wrobel’s toss in front of the cage and 5:25 left that made it 11-2.

The Indians scored the next two goals as Schamber’s attempt from three feet put the hosts ahead 12-2 with 4:57 on the clock, followed by a 10-footer Wrobel put in with 3:11 on the clock that made it an 11-point cushion.

“I do think that we wanted to come out and go hard,” Wrobel said. “We know that it’s a rivalry game.”

The Bulldogs trimmed the margin to 13-3 when Abramian located the back of the cage from five feet and 2:52 left.

The Indians outshot the Bulldogs 30-27 overall and 20-14 at the intermission.