It’s one thing to play high school sports, while it’s another to play at a very high level. It’s even more remarkable to be recognized for doing something extraordinary.

On Friday night at the Brian Hurst gym, the 1987 CIF Southern Section Northwestern Conference finalist Burroughs football team, along with the CIF-winning 440 relay team, and longtime track and field coach Mike Krose were inducted into the Athletic Hall of Fame before a packed house.

That football squad finished 12-2, was ranked sixth in the state, was the Foothill League champions, and compiled 438 points, while the relay team, which consisted of Otto Varela, Doug Dragomer, Bruce Luizzi and Steve Hubbell, were some of the fastest runners ever in the school’s history. 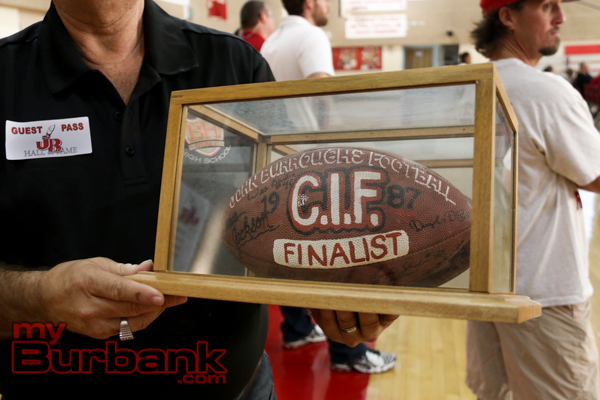 The 1987 CIF finalist football is encased for posterity. Photo By: Edwad Tovmassian

In addition to being the track and field coach, Krose was the boys’ golf coach for 11 seasons and started the girls’ golf team, where he coached for 11 years. Krose was a fixture at basketball games where he worked the scoreboard for nearly two decades, and was a mathematics teacher at Burroughs.

“This is a great honor for me,” said McElwee, the head football coach for the 1987 squad. “This was my first head coaching job. Some coaches go through their entire career and don’t have the talent that I did.”

McElwee went on: “In order to be successful, you need several things. First you need skill and we had that. [Quarterback] Jeff Barrett threw for 6,000 yards in his two years. Our offensive line was led by center Joe Howe. He was the captain. Bob Dunivant put together a great offense.”

McElwee then spoke about the other side of the line. “On the defensive side, we had a philosophy. You remember. Rip, read and react. We had 15 stunt packages. We didn’t know what we were going to do. Our defense was exceptional. We held our opponents to 160 points. We had talent. We had strength and we had speed. That allows you to do a lot of things.” 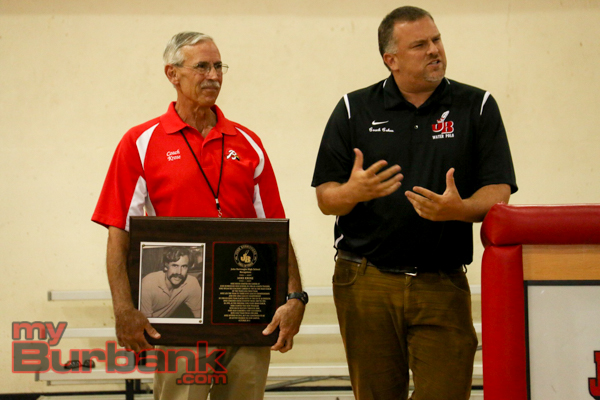 McElwee then spoke about being heady. “First thing I would want is a group of smart kids,” he said. “We had intelligence and we had personality. We didn’t make any mistakes. They caught on. They were easy to coach.”

McElwee closed with one final sweep. “You need to be proud of your accomplishments,” he pointed out. “But you also have a responsibility to respect what came before you. All the great athletes. You also need to respect the backbone of John Burroughs and that’s the coaches.”

Peebles, the current cross-country coach and math teacher, also addressed the appreciative crowd. “The impressive thing about that winning relay team isn’t the time [42.8], but it’s the time they put in. Think about that. Every day they were working to get better. So when it came time to run that day at Cerritos College, they were ready. That’s what’s impressive about them. It’s the work that matters. Everybody sees the final results.” 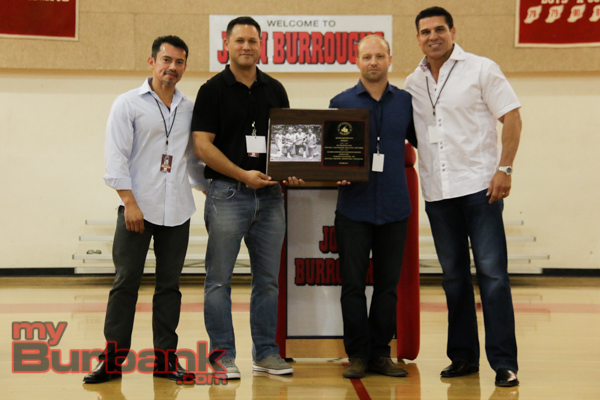 A major contributor on that 1987 football team was running back Wes Bender. “It’s great to see guys you haven’t seen in twenty years,” he said. “It’s great and an exhilarating feeling. It’s nice to hear all their stories.”

Bender, who later played at Glendale Community College and USC, added: “This [Hall of Fame] takes you back to that time. We were a tight team. Remember, I transferred from Burbank, and I was that fat slow kid who couldn’t run. But when we beat Burbank 41-0 and I had a 50-yard run, that was something I’ll always remember.”

Bender was a hard-nosed and tough inside runner, who was fearless. “I had a great time here and at Glendale College,” Bender said. “My girlfriend [Tiffani] has been behind me and has been very supportive.”

Hubbell was a versatile athlete who played wide receiver on the 1987 team and is currently a chemistry teacher at Burroughs.

“A lot of kids don’t think that’s me because I’ve put on some weight,” Hubbell said. “Playing sports at Burroughs was so meaningful for me, and something I’ll never forget. I wasn’t a star receiver on the football team which had Jason Teitel and Kevin Strasser, but I was happy to play on that team.”

Hubbell, who went to UC Davis for his bachelor’s degree and USC for his master’s degree, was proud to be a part of that talented group. “We were a close-knit team,” he said. “That team had real chemistry.”

When asked to choose which he preferred, football or track, Hubbell was torn. “I really loved track, but the bond with the football team was really strong. I made a lot of friendships on that team.”

And now that stand-out team, the 440 relay foursome, along with Krose, will be remembered forever.