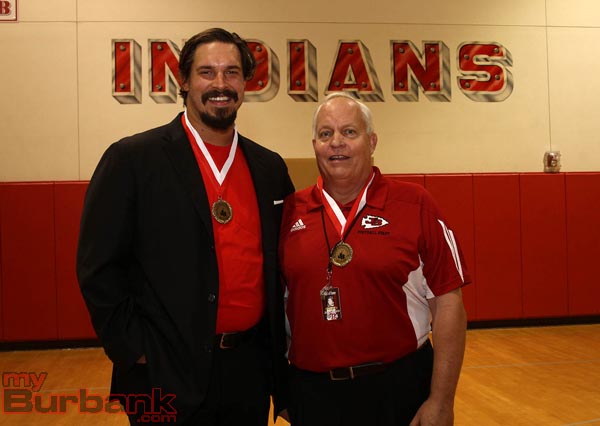 Eben Britton (left) and Jay Gudzin are this year’s inductees into the JBHS Hall of Fame (Photo by Ross A. Benson)

Two of Burroughs finest men were honored recently at the annual Burroughs Athletic Hall of Fame ceremony. Alumni Jay Gudzin and Eben Britton were inducted into the Indians’ prestigious group of former athletes, coaches and administrators who represent the best of the best in the school’s illustrious athletic hall of fame.

The Burroughs Hall of Fame recognizes athletes who have performed at the highest levels in high school, college, in the Olympics, and at the professional level. Gudzin and Britton became inductee No. 66 and 67 to have been honored. 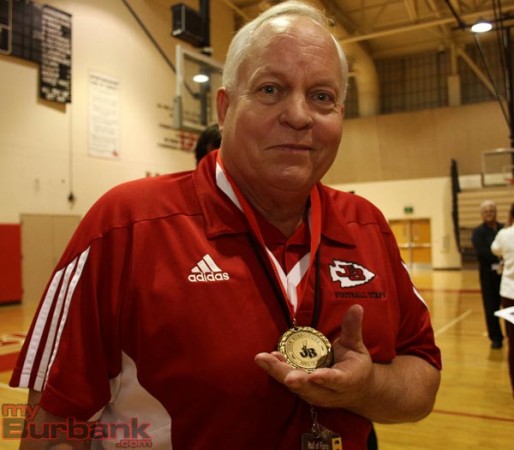 “It’s a great honor because you saw the list of all the people who are in it. It’s something that means so much to me because it’s a part of the history of John Burroughs,” Gudzin said. “Marty Garrison is trying to make sure we are covering as many of the coaches that have been here over the years. It’s like being in an alumni group. It’s a special group of football coaches, players and people who have meant so much to this school.”

Gudzin graduated from JBHS in 1973 where he received “All-League” honors on offense and defense. To this day, he is still one of the top 10 tacklers in Burroughs’ football history. Upon playing football at Valley College and being named as a “JC All-American” and receiving a scholarship to Long Beach State, Gudzin returned to his alma mater where he spent 35 years as a teacher, football and baseball coach, and Assistant Principal.

When asked if he would change anything in his life, Gudzin said not a chance.

“I wouldn’t change a thing,” he said. “I left Burroughs in 1973, went to college, and five years later (coach) Bob Dunivant called me up and said we have a job opening. He helped me get my job here in 1978.”

Thus began a coaching career that spanned from 1978 through 1999. He worked at Burroughs from 1978 to 2009. Now enjoying retirement, Gudzin is still a familiar face on the sidelines at football games and at various Indians sporting events. His heart will always be at Burroughs and his presence will always be welcomed.

“Athletics has meant everything to me,” Gudzin said. “This honor allows people to know how much they mean to this school.”

Regarded as one of Burroughs’ greatest football players, Britton returned home during his bye week as a member of the Chicago Bears to be a part of the special induction. It wasn’t a hard choice. Burroughs is home for the 2005 graduate. 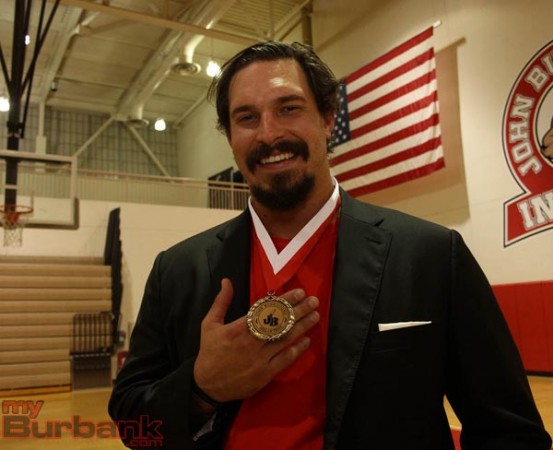 “It’s really special and an incredible honor to be able to come back here and be inducted into the JBHS Hall of Fame,” Britton said. “It’s amazing to come back and see all the people who had such a gigantic impact on me as a human being, a man, a father and a husband. This is where it started.”

Britton had his No. 77 Burroughs jersey officially retired at the ceremony. He was a three-year varsity starter at JBHS earning All-State, All-CIF and All-Foothill League honors. Considered a four-star recruit by Rivals.com, Britton earned a scholarship to the University of Arizona where he was named first-team All-Pac 10 in 2008.

Britton fulfilled a dream come true when he was drafted by the Jacksonville Jaguars as the 39th overall pick of the 2009 NFL draft. He played for the Jaguars from 2009 to 2012 and signed with Chicago a year ago where he currently plays as an offensive lineman. 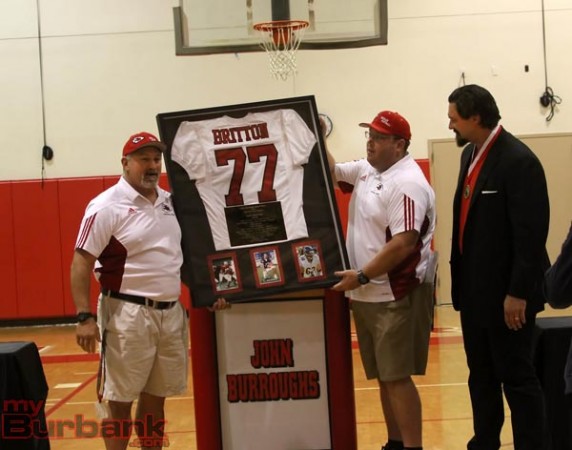 “Coach (Keith) Knoop and Coach (Mike) Reilly are really the foundation of who I am as a football player and as an offensive lineman,” he said. “It’s great to share this moment with them and all the incredible people who have impacted my life.

Knoop and Reilly each spoke highly of Britton and presented him with a framed No. 77 jersey.

“He’s one of the foundation players of this program when he came here in 2002. I had been coaching for five years and I get a player like that walk in through the door. All these recruiters come in and we get put on the map,” Knoop said. “He represents Burroughs. I hope we represent him well. He sure represents us well. He’s a great young man.”