The Burroughs High girls’ basketball team (5-4) sparkled at the free-throw line, making 27 of 30, but still lost to Alemany 69-47 in the Gold Division third place game of the Burroughs Tournament on Saturday.

On Friday night, hoping to reach the finals, Burroughs struggled as the Indians suffered a 49-41 setback to Granada Hills in a semifinal contest. 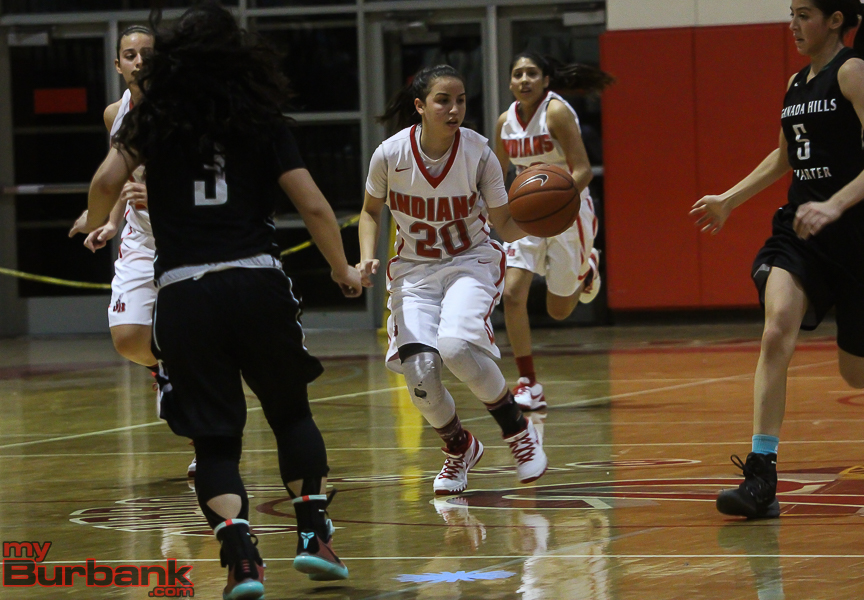 The Highlanders outscored the Indians in every quarter except the second when Burroughs tallied 10 points to four for Granada Hills.

Senior guard Jordan Meltzer showed the way with 14 points for the Indians and scored 10 points in the second half.

The Highlanders, who were paced by junior forward Marlene Salazar’s game-high 16 points, led 17-11 after the first quarter. Granada Hills made seven of 13 from the field while the Indians managed five of 14 as Ibarra nailed a three-pointer with four others contributing a hoop including Meltzer.

Burroughs made a dent in the second quarter as Granada Hills (18 of 42 for 42.8 percent) converted two of 11 from the floor. The Indians nailed four of 14 and went into the intermission knotted at 21-21. 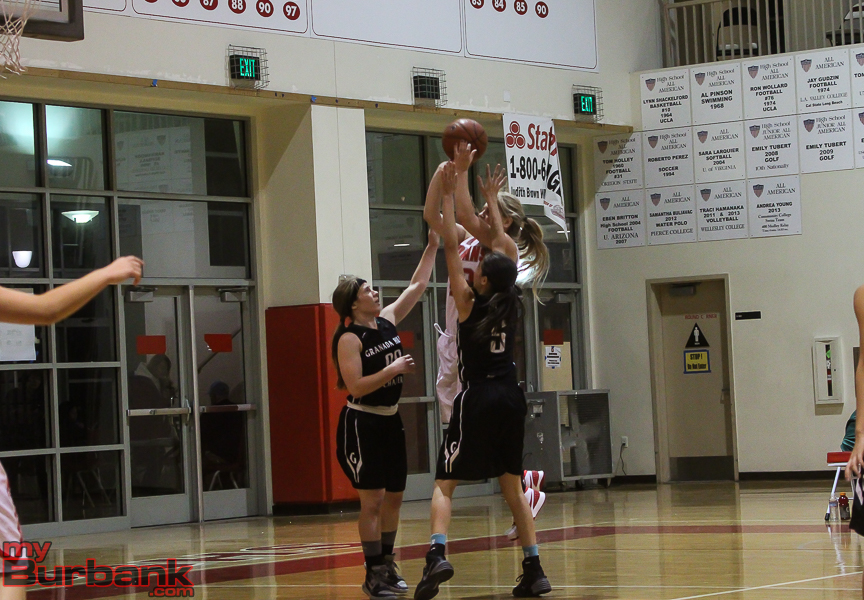 Senior guard Brooke Radcliff goes up for a shot against the Highlanders. Radcliff had six points. (Photo by © Ross A. Benson)

Senior guard Melissa Garcia dropped in all of her four points in the second quarter for the Indians, and senior guard Brooke Radcliff (six points) added two free throws.

The Highlanders made four from three-point range on the evening with Tanaka, who had nine points in the second half, chipping in with three.

The Indians were limited to 10 points in the third quarter with Meltzer contributing five points that included a trey and two free throws and Ibarra’s three-point shot that cut the Highlanders’ lead to 34-31 with 1:06 left as Granada Hills called time out.

Granada Hills would take a 36-31 lead into the fourth quarter and then nail three of six from the floor and seven of nine from the charity line as Tanaka made five.

Burroughs struggled from the field in the fourth quarter, making four of 16 and one of six from the free-line stripe. Meltzer did have five points in the stanza including a three-pointer.

Two Elections Down, One to Go - But Do You Really Care?
myBurbank Honors Its Scholar-Athletes of the Year for 2012-13
Burbank Clinches Playoff Berth In 16-10 Win Over Burroughs
Burroughs Girls Basketball Takes Out Visiting Glendale