Muir High posed many questions, but Burroughs had few answers for the Mustangs in a Pacific League showdown for first place as the speedy visitors raced off with a 42-7 decision Friday night at Memorial Field.

Poor field position by the Indians, who were limited to 68 total net yards, led to several Muir scores in the opening half and the burden of rallying from a 21-point deficit at the intermission proved too steep.

The Mustangs sit atop the league standings with a 3-0 record, while the Indians are tied with city rival Burbank, Arcadia and Crescenta Valley at 2-1 for the second spot. 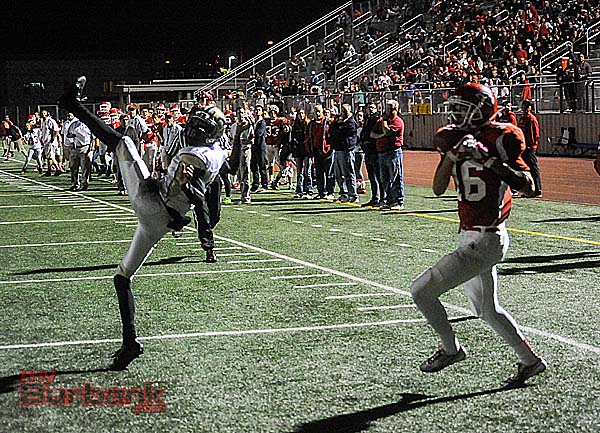 The Indians’ lone touchdown came with 1:31 left in the second quarter when senior quarterback Andrew Williams (four of 13 for 55 yards and one interception) found senior wide receiver Conor Joyce (24 yards and two receptions) with a 20-yard spiral in the left corner of the end zone.

“We knew how good they were,” Burroughs coach Keith Knoop said. “They’re well-coached and they play at a different level. They’re physical. They rushed seven [defensive players] and we couldn’t do anything.” 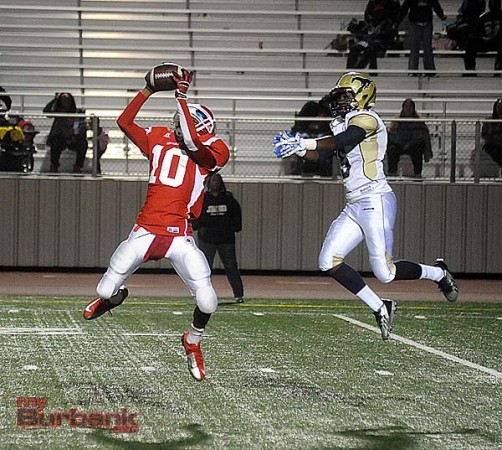 The Indians did have an exceptional defensive stand in the third quarter as they held the Mustangs on fourth down and one from the one-yard line.

Burroughs (3-3) forced an initial punt by the Mustangs (5-1) as the Indians took over at their five-yard line, but could only advance the ball to the 13-yard line before punting.

The Mustangs (292 total yards) took control at the Burroughs 34 and three plays later found the end zone when quarterback Dejon Williams (15 of 23 for 193 yards with an interception) located wide receiver Devin Leagons with an eight-yard bullet and 6:43 left in the first quarter.

“We had a good game plan and we wanted to play physical,” Muir coach John Hardy said. “We wanted to make them throw the football. They [Burroughs] like to drop a lot in coverage and that allowed us to throw the ball.” 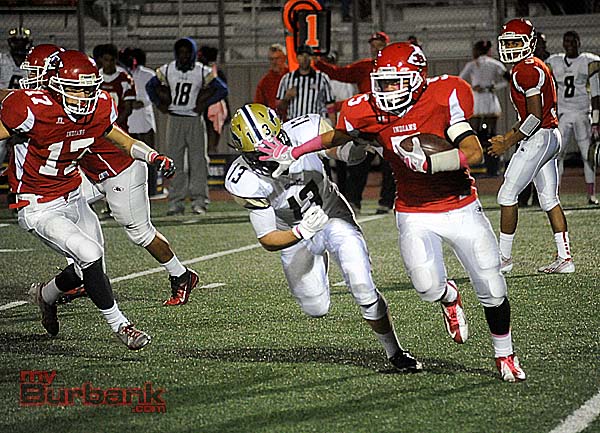 The Indians, who rallied for a 24-17 victory over the Falcons a week earlier and were riding a two-game winning streak, punted as Muir took over at the Burroughs 31 after Leagons returned the kick 20 yards.

It took five plays before it became 14-0 early in the second quarter when tailback Tony Claxton (15 yards on four carries) dented the middle of the defense from seven yards out.

A fumble by Williams (sacked twice and finished with minus 11 yards rushing) after a nine-yard gain, saw defensive back Devonte Cravin pounce on the ball at midfield which led to the Mustangs pulling ahead 21-0 and 3:46 left in the second quarter. 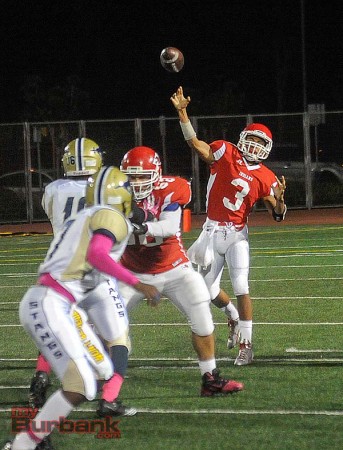 This time the Mustangs needed 11 plays before locating the end zone as running back Jaylyn Newsom (five rushes for 30 yards) carried the ball in from 12 yards out.

“We played a pretty dominant game tonight,” said Hardy, whose club entered the fray with a three-game winning streak and had outscored Verdugo Hills, Hoover and Glendale, 145-9. “We had some players missing and we need to clean some things up, but it was clear we were the better team tonight.”

Muir’s final tally in the opening half was a 58-yard, five-play trek that culminated when Williams teamed up with Claxton on a 13-yard pass and 21 seconds left in the second quarter.

The Mustangs padded their lead to 35-7 early in the fourth quarter when Newsom’s six-yard stroll capped a 78-yard, four-play drive.

Williams was picked off by Cravin with 10:06 remaining in the fourth quarter and returned the football 60 yards for a touchdown that made it a 35-point spread.

Burroughs junior running back Javier Pineda had 20 yards on 18 carries and caught a pass for 18 yards, senior defensive back Eric Gordon had a pick, and senior lineman Hawkins Mann was out with assorted leg injuries, but is expected to play in Burroughs’ next game against Hoover on Thursday at home.