The game winner was provided by Jonathan Rivas, who booted a 39-yard field goal with 11:03 left in the fourth quarter that gave Burroughs Coach Keith Recchia his first win over the Bulldogs in five seasons.

“This is an unbelievable feeling,” Recchia said before getting a Gatorade bath from several players. “We’re the league champs and it feels great. They score a lot of points and we knew that we were going to have to score a lot of points. It was a really good game and it came down to the wire.”

With the victory, Burroughs, Burbank and Crescenta Valley all finished in a three-way tie for first place in the league.

“It was a great football game,” said Rivas, a sophomore who replaced injured kicker Cade Borland on the varsity for a few games. “I give credit to the snapper and the holder. I wasn’t nervous at all. I was confident.” 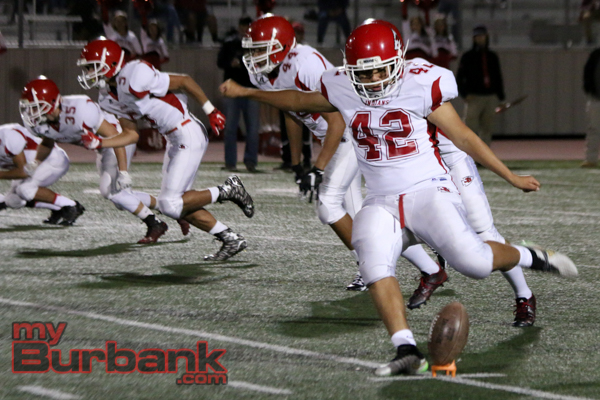 Burbank (7-3 and 6-1 in league) began its last drive at the Bulldog seven-yard line and moved to the Indians 47-yard line, but advanced no further. 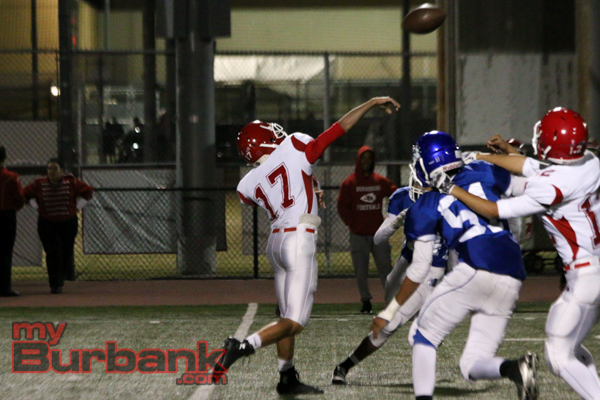 The Indians (373 total yards) moved ahead 14-6 when sophomore quarterback David Lennstrom capped a 53-yard, five-play excursion with a 19-yard gallop and 11:49 left in the second quarter. Rivas added the point after.

“I knew that we would keep going,” said Lennstrom, who hit four of eight passes for 98 yards with one interception and added 110 yards on 19 carries. “We didn’t want to lose. We lost to Crescenta Valley [23-21] last week and we wanted to bounce back and we did.”

When sophomore linebacker Brian Gutierrez scooped up a blocked punt and returned the ball 32 yards and 9:30 showing before the half, Burroughs pulled ahead 21-6 after Rivas converted the point after. 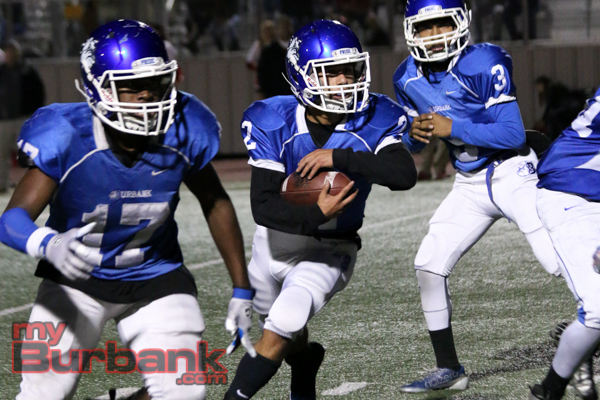 Burbank junior varsity running back Nathan Cruz had 84 yards on 16 carries in one-point loss to Burroughs. Photo By: Edward Tovmassian

The Bulldogs bolted ahead 22-21 with 6:08 left before the intermission, but Burroughs answered with a 30-yard laser from Lennstrom to sophomore wide receiver Devin Harrison and 16.9 seconds left in the quarter, and after the extra point by Rivas, the Indians darted ahead 28-22.

Burbank’s only points in the second half was a three-yard jaunt from Marshall and 6:50 left in the third quarter. Barragan tossed the two-point pass to sophomore wide receiver Kaydon Spens.

In a wild and entertaining freshman game, the points seemed like they were coming out of a faucet as Burroughs led 14-0 after the first quarter and were ahead 20-8 at the half.

The Indians (433 total net yards) pulled in front 34-14 at the end of three quarters, and each team scored 16 points in the fourth quarter.

“It was really satisfying to get this win over Burbank because I think we underachieved early in the season,” Burroughs coach Art Yanez said. “But we finished strong at the end and had a four-game winning streak.” 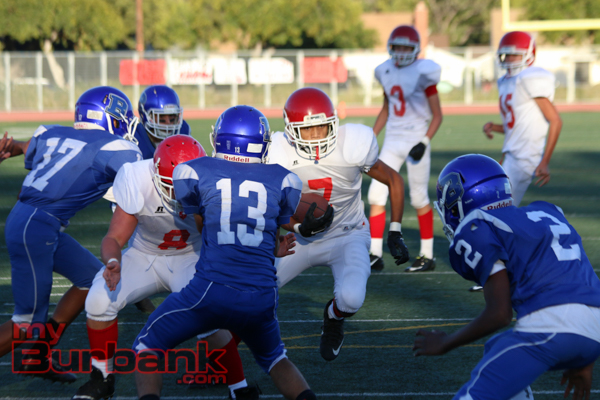 Running back Jake Barraza had a one-yard run and 4:47 left in the opening quarter and quarterback Nathan Piper’s two-point toss to Barraza made it 8-0.

Burroughs marched ahead 14-0 when running back Alex Deptula scored from seven yards out and 1:28 left in the initial quarter.

With 5:32 remaining in the second quarter, wide receiver/running back Diego Garcia turned in a spectacular 80-yard dash that catapulted the Indians in front 20-0.

The Bulldogs finally scored when running back Christopher Stanis (61 yards on five rushes) found the end zone from 11 yards out and 1:16 left before the break. Raymond Dones (83 yards on 11 carries) bolted in for the two-point conversion as Burbank narrowed the lead to 20-8.

“Our offensive line did a great job,” said Piper who completed one of four passes for 34 yards. “We beat those guys [Burbank], but we respect them.”

The see-saw battle continued as the Indians (5-5 and 3-0 in league) responded with a two-play, 56-yard strike that was climaxed when Garcia (game-best 234 yards on 21 carries) scored on a seven-yard scamper and two minutes left in the third quarter as Burroughs moved ahead 34-14.

A one-yard run from Porras and 9:47 remaining in the fourth quarter and a two-point pass from Porras to Brian McDonald lowered the lead to 34-22.

The scoring binge continued as the Indians tacked on a 10-yard dash from Garcia with eight minutes left. After Piper located wide receiver Niccolo Chuidian with a two-point offering, it became 42-22.

Burbank came within 42-30 when Stanis scored on a 45-yard scurry and 5:32 left in the fourth quarter that ended a seven-play, 61-yard march. Dones added the two-point conversion.

The scoring finally came to an end on a four-yard burst from Deptula with 2:09 remaining in the fourth quarter and finalized a nine-play, 53-yard drive. Garcia’s two-point conversion put the Indians ahead by 20 points.

The Bulldogs (271 total yards) had a difficult time stopping Burroughs’ run which finished with 399 yards.

“That’s their strength and that’s our weakness,” Burbank coach Joe Manasewitsch said. “Our defense couldn’t stop them. When we were down 20-0, we knew it was going to be tough. The effort was there, but I guess it wasn’t meant to be today.”