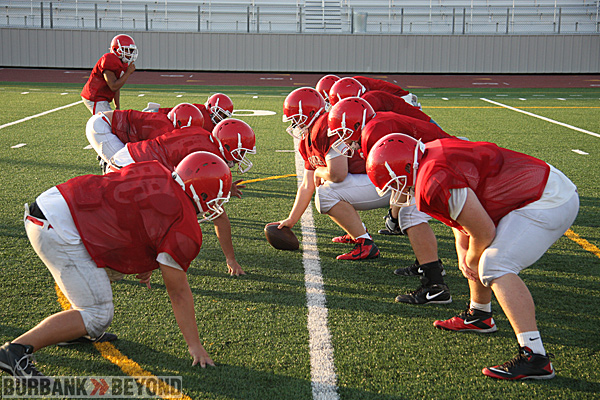 John Burroughs will make its regular season debut on Friday with a clash against small-school power Paraclete of Lancaster at 7 p.m. at Memorial Field. The Indians are coming off a third consecutive league title and a 6-5 overall record.

“It’s definitely an exciting time being able to play a real game,” Burroughs Coach Keith Knoop said. “Last week was great to go against somebody different but it didn’t count for anything other than evaluations. A win against a good Paraclete team would be really good for us. They are highly ranked and it would be nice to get a win and set the tone for the year.”

The Indians played Schurr High School last week in its final scrimmage. Now it’s on to the 2012 regular season.

As in years past, Burroughs will look to find its new diamond in the rough at running back. Replacing All-CIF star Zander Anding won’t be easy. But the talented Israel Montes could be the answer. The 5’8” 170 pound scat back has been patiently waiting his time to be the featured back in the Indians powerful running game. Seniors Garrett Manoukian and Josh Storer will also see action as JBHS will look to set the tone early with a grind it out attack.

“Blocking for the running backs has always been a pleasure,” senior center Joseph Wallace said.

The unsung heroes are the big men up front who create the holes for the running backs. What has been the key to the Indians success on the offensive line?

“It takes hard work, determination and intelligence above all. We all need to band together as a group that we call ourselves ‘the union,’” senior offensive guard Daniel Marbach said. “We are in the business of moving bodies.”

Junior Andrew Williams has been named the starting quarterback for the season-opener after a highly contested battle with fellow junior Angel Manzanero.

Paraclete is coming off an early 42-20 loss to Serrano last week. But don’t let that score fool you. This is a good Spirit team who finished 11-3 last season and have high expectations for another strong year.

“They have tremendous athletes,” Knoop said. “They have great team speed, size and are gigantic up front.”

The Spirits feature the 2011 Alpha League Defensive Player of the Year in Bryan Rodgers, a senior linebacker. Quarterback Tyler Carvalho returns as the signal-caller with talented Antoyne Hutcherson at running back.

“We are expecting a very good Paraclete team. They are physical and fast. It should be a close game,” senior Erma Cruz said.

Paraclete has won two CIF titles since 2008 and enters the game ranked No. 4 in the Mid-Valley Division.

This is the first game back at home on Memorial Field for Burroughs after having spent all of last year traveling on the road. The Indians are anxious to defend their home turf.

“It’s definitely a prideful moment. I get goose bumps all over this field,” Marbach said. “It’s amazing and I’ve been waiting forever to play here again.”