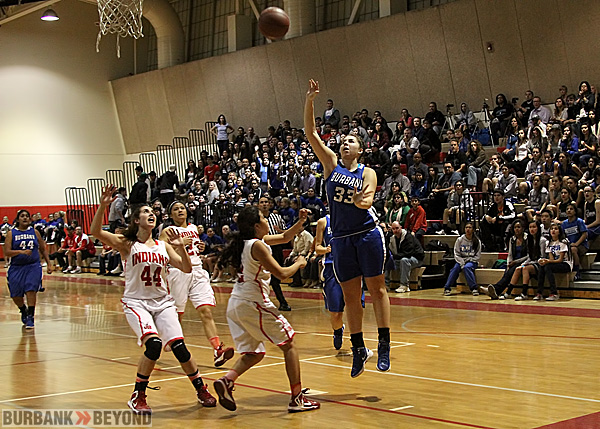 Burbank’s comeback fell short against the Indians (Photo by Ross A. Benson)

Forget that neither Burroughs nor Burbank shot especially well from the field during Friday’s Pacific League showdown, or that it was sloppy at times. 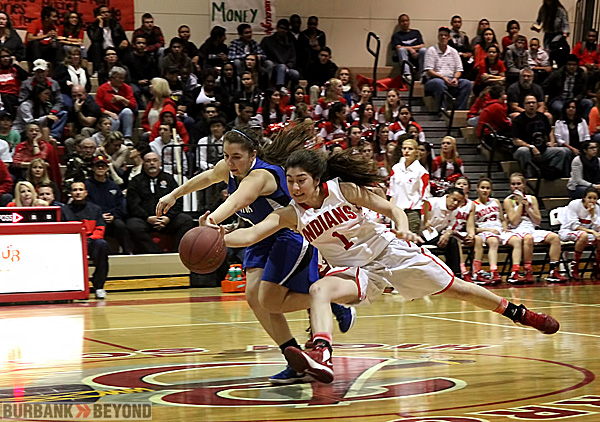 Neither team refused to give in as Burroughs’ Davina Del Castillo battles for a loose ball (Photo by Ross A. Benson)

What mattered was the Indians held a commanding 16-point halftime lead, but the Bulldogs rallied in the fourth quarter only to fall short, 54-46, in a contest that snapped a first-place tie before a near-capacity crowd at the Indians gym.

Burroughs (17-3, 6-1 in league) remains in first place atop the league standings while Burbank (9-11, 5-2 in league) slipped into second with seven games remaining.

After being behind from the opening tip, the Bulldogs came to within 37-30 and 6:55 left in the final quarter when senior shooting guard Jamie Gonzalez (team-best 13 points) stole the ball and put in a layup.

Senior center Courtney Seidler (12 points) added a hoop with 2:25 remaining to cut the deficit to 48-41.

That aside, Aysia Shellmire held the spotlight from the outset as the senior center delivered a calm and cool game-best 19 points with nine rebounds for the Indians.

“I think we knew even with the big lead we were going to have to hang on,” said Shellmire, who scored 11 points in the second half. “It was really loud in there, and they [teammates] were having a hard time hearing me, so I had to give hand signals.” 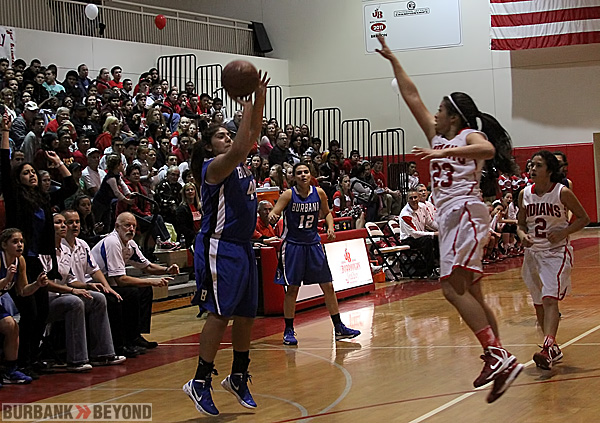 Burbank’s Lysette Perez shoots over the arms of the Indians Paula Galicia (Photo by Ross A. Benson)

Burroughs, who shot 35.1 percent from the floor (19 of 54), had a 16-5 lead after eight minutes, and were ahead 28-12 at the intermission as sophomore point guard Delaney Nicol tallied all nine points in the opening half, while Shellmire added eight.

“I think Burbank had a tough time in the first half,” Burroughs Coach Vicky Oganyan said. “I was surprised we were ahead by 16 at the half, but I knew they were going to come back because they have players who can make plays.”

Maybe nerves were the cause, but the Indians came out and missed their first seven shots in the opening quarter, and didn’t get on the board until Nicol scored midway through.

Nicol’s hoop inspired her teammates as Burroughs finished the eight-minute stanza draining four of its next six attempts. 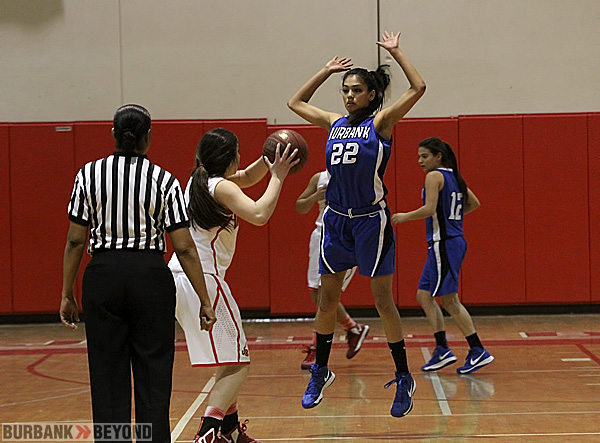 Poor shooting continued for both into the second quarter as Burbank converted two of 11, with senior small forward Lysette Perez (eight points) contributing five points. Burroughs made five of 16 as Shellmire dropped in six points.

The Indians began the third quarter by failing to locate the hoop on their first five shots but Shellmire’s follow with 6:05 showing made it 30-15.

Burroughs was successful on two of seven over the rest of the quarter and entered the fourth quarter ahead, 37-24.