Max DeAmici’s three-run double in the bottom of the fifth inning broke a 2-2 tie and lifted Burroughs to a 5-3 VIBL victory at home against Burbank. In a game featuring many of last year’s junior varsity players, the Indians prevailed behind the timely hitting of DeAmici and Roy Hirota. 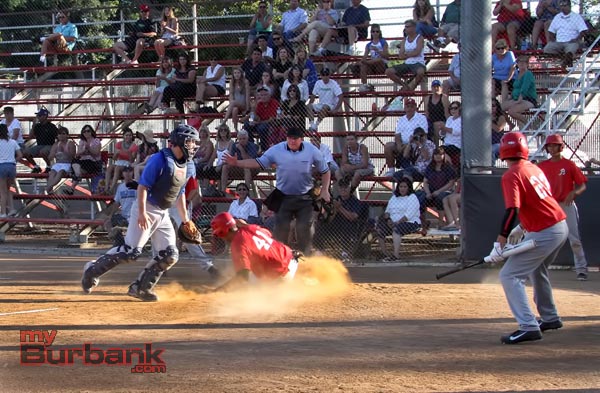 Noah Hord scores for the Indians on DeAmici’s clutch hit (Photo by Ross A. Benson)

Burbank scored the game’s first run in the top of the first inning when Camden Palmisano (two hits) drove in Cameron Briggs on a ground-out. Briggs had a productive day at the plate going 3-for-4 with a double and a run scored.

Burroughs responded with two runs in the bottom of the third when Hirota smashed a deep drive over the head of Bulldogs’ left fielder Alex Tarandek to drive in Omar Tejada and Jake Noud on a stand-up double. 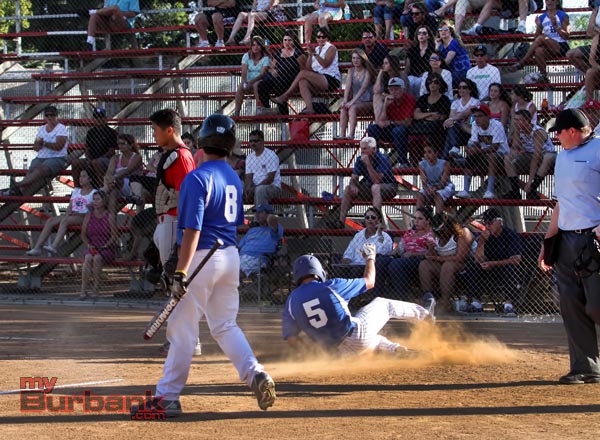 Connor Lockheimer slides across home plate for the Bulldogs (Photo by Ross A. Benson)

The Bulldogs scored to tie the game at two apiece when Connor Lockheimer scored on an errant throw from Hirota, playing catcher, back to Cano. It was one of nine errors combined by both teams.

With two outs, DeAmici unloaded his big hit over right fielder and former teammate Ozzie Dominguez, a Burroughs transfer, to give the Indians the lead for good at 5-2.

“You are always looking to get hits but when they come with two outs they seem to be a little more special,” Burroughs coach Kiel Holmes said. “You like it when your guys aren’t afraid to attack the ball when their backs are against the wall.”

Burbank fought back to score a run in the top of the seventh on an Alex Minnick RBI double. With the bases loaded, Tarandek grounded out to Indians’ second baseman Tanner Whitlock to end the game.

Higgens threw six innings allowing four hits, no earned runs and striking out eight. Cano gave up three hits and no earned runs in four innings of work. He struck out three and walked only two. 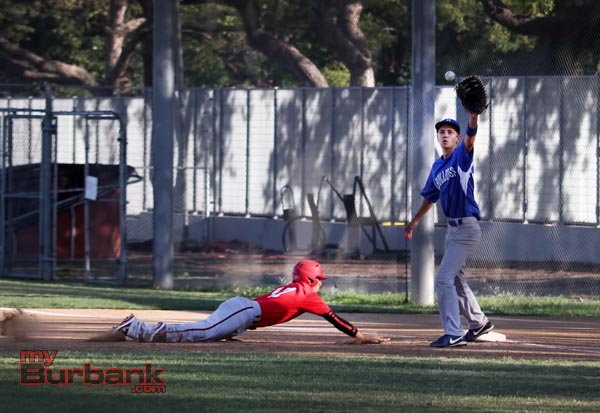 The teams meet again on July 15 at Burbank (Photo by Ross A. Benson)

While Burbank (1-8) struggles to find an identity early on in the summer with little to no varsity experience returning from last season’s championship squad, Burroughs (5-2) has made progress with wins against Chatsworth (Valley North), Granada Hills, Royal and now Burbank.

“Ultimately wins and losses don’t mean anything. We are 5-2 right now and we could be 0-7. We are a young team in age and even younger mentally,” Holmes said. “We have a lot of progress to make. We are moving forward but we have a long ways to go. That’s what summer is all about. Not wins and losses.”

The two cross-town rivals meet again on July 15 at Burbank at 7 p.m.