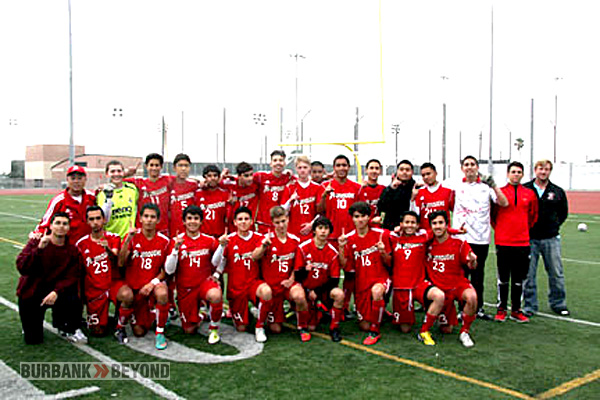 His name was not the most prominent in the stat sheet for the Burroughs High soccer team when it opened the CIF Southern Section Division III Playoffs against visiting Anaheim High. 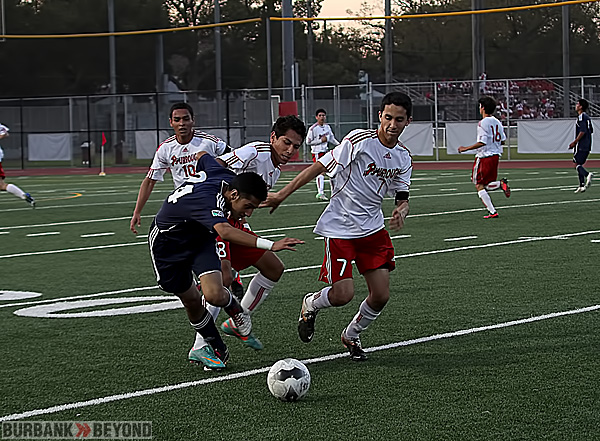 Brian Arzate, #7, did a fabulous job of dictating the victory for Burroughs (Photo by Ross A. Benson)

Brian Arzate had just one assist in the Indians’ 4-2 victory at Memorial Field on Friday, but he was main generator of offense from his deep-lying playmaker position in the Indians’ midfield.

“Brian is our field general. He makes everything happen.  He covers a lot of ground every single game,” Burroughs Coach Mike Kodama said. “He does a lot for us in deciding the tempo of the game.”

Arzate said he finally feels he has found his niche after experimenting in different positions.

“First I was a forward, then I became a defender,” Arzate said. “I love defending and I love to cover the middle where it is the hardest position and marking the best players on the other team. I like to be the man who starts the offense and who starts the defense.”

Arzate’s passing helped Burroughs find the net three times in the first half, even though the Indians trailed for a short time in the match.

“I respect Anaheim, they’re a great team. (They) got the first goal. I think after that we said we need to put our foot on the gas. We went forward and got that first goal and then a second, a third and a fourth,” Arzate added. 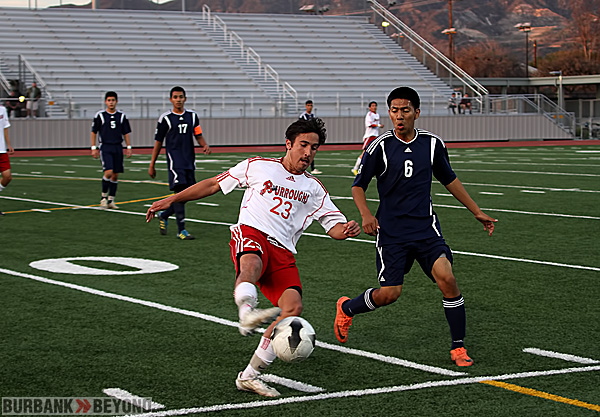 Brandon Gerlach controls the ball for the Indians (Photo by Ross A. Benson)

Early on Anaheim took advantage of the only mistake Burroughs goalkeeper Elliot Whitecotton made.

In the 11th minute, Anaheim’s Jesus Cruz crossed the ball from the right side. Instead of attempting to catch the ball, Whitecotton punched it away. Unfortunately, it was right to Alex Supancic, who was left unmarked just a few yards in front of the goal. Supancic easily pounced on the error to give the Colonists the quick early lead. But Whitecotton was superb from then on, recording nine saves, six of which came in the second half.

Burroughs (14-6-3) had come on strong in the very first minute of the match when Michael Conrad’s left-footed shot off a corner kick missed going into the net thanks to fine foot save from Anaheim goalie Gerardo Alvarado.

The Indians finally got on the board in the 19th minute when Xavi Izqueta’s left-footed free kick found Brandon Gerlach, who headed the ball past Alvarado.

Burroughs took the lead in the 24th minute as a long throw by Gerlach sailed over almost every player for both teams. However, Nolberto Alcantar was at the back post to put in the loose ball. 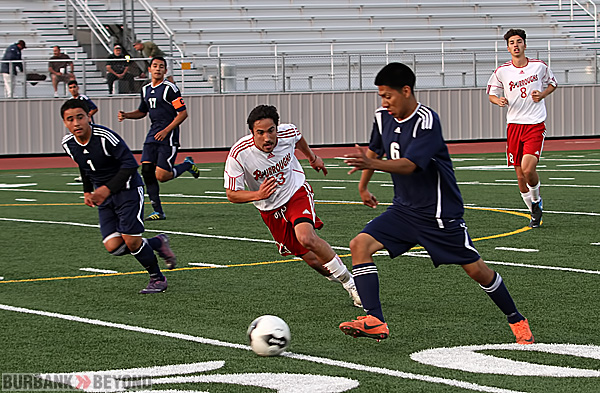 Burroughs scored four unanswered goals for the win (Photo by Ross A. Benson)

The Indians took a two-goal lead in the 32nd minute by scoring once again on a set piece. Izqueta headed a free kick by Arzate to push the advantage to 3-1.

Izqueta scored his second goal in the 54th minute by heading in a cross from V.J. Salazar.

“We had to come from behind. I think the boys stayed calm. The thing is to be steady,” Kodama said. “We had possession and we were able to use that. It was important to get a few goals in the first half.”

Burroughs, the No. 6 seed, will play at Redlands East Valley, a 2-1 winner over Riverside Norte Vista, on Wednesday in the second round of the playoffs.