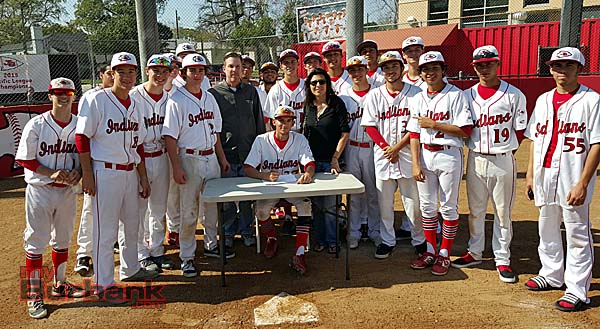 Burroughs High pitcher/outfielder Shaine Leonard has signed a national letter of intent with the University of Antelope Valley.

Leonard, a right hander with a submarine delivery, accepted an offer from the Lancaster-based school after attending some events intended to help his recruitment. Antelope Valley competes in the National Association of Intercollegiate Athletics.

“I went to a few showcases and they saw me and invited me to their camp at their school for prospects,” Leonard said. “I’ve talked to the coaches for a while now and they helped me out and gave me a bit of a scholarship. I’m real happy about it.”

Leonard said there were several factors that made the decision an easy one.

“I’m going to be able to come every weekend and spend time with my family, so it’s going to be perfect,” Leonard said. “This seems like a great fit for me.”

Leonard said he also likes the role he expects to play.

“They’re going to give me an opportunity to be a (two-way) player and see if I can play in the outfield,’’ Leonard said.  “They mostly see me in the bullpen as of next year and we’ll see where it goes from there.”

“I’m very happy for Shaine. He reinvented himself last year as a submarine pitcher and has worked very hard with our pitching coach, Tony Sandoval, to improve,” Sherwood said. “I think the best is still yet to come with his ability.”