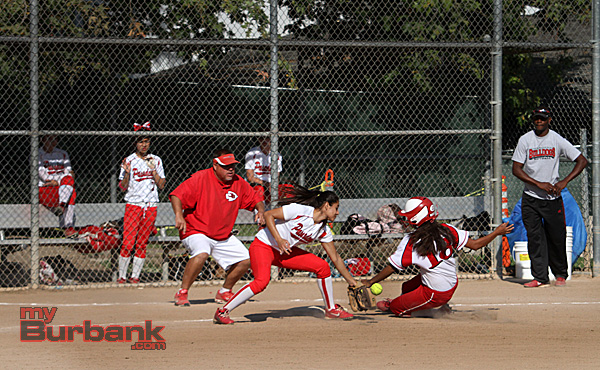 Fresh off its tournament title in La Jolla during spring break, Burroughs continued its winning ways with a dominating 10-2 victory against Pasadena Tuesday afternoon at Olive Park. It was the seventh consecutive victory for the Indians who improved to 10-4 overall and 2-0 in league.

Cheyenne Steward threw six innings allowing only one run on six hits as she earned her sixth win of the season. Michelle Santiago had a huge day at the plate going 3 for 4 with a home run, three RBI’s and three runs scored.

“We are doing really good. It’s going to be a good season,” Santiago said. “I think it is hard work that pays off in the end. We work hard all the time and I think we can take league again.”

Burroughs jumped out to a 3-0 lead in the second inning. Leading 4-1 in the bottom of the sixth inning, the Indians broke the game wide open as they hammered three home runs and tallied six runs.

Home runs by Santiago, Kaitlin Okimoto (three RBI’s) and Lahela Bautista in a matter of six batters ended the hopes of the Bulldogs.

“That inning was great because we finally started to wait on some pitches and not be overly aggressive,” Burroughs Coach Doug Nicol said. “We waited and got our pitches.”

Steward has filled in wonderfully in the absence of the injured Brice Edrington. Steward, who was sick during the trip to La Jolla but still played and pitched effectively, controlled the tempo of the game from the outset.

“I’m working hard and doing what I can. Overall we did great,” Steward said.

“She did well. She’s been sick so her energy was down a little bit and her velocity wasn’t normally where it would be,” Nicol added. “But I thought she did a good job of hitting her spots. And she had good defense behind her. She will be even more effective once she gets her strength back.”