Quick starts by the offense and a ferocious defense have helped the Burroughs High football team get early leads and remain undefeated through three games, including Thursday night’s 41-24 nonleague victory over Kennedy at Handel Stadium on the campus of Western High in Anaheim.

This was the first road game for the Indians, who came in having scored 105 points while allowing 30.

“We had to play the second half. So that was new,” said Burroughs coach Rand Holdren of being challenged over the last 24 minutes. “But we’re like everybody in the state of California, we’re thin. We’ve got some guys banged up. They need to get healthy. It all boils down to efficiency. We need that perfect game. We need to play and execute at the level that we can. We show flashes of it.” 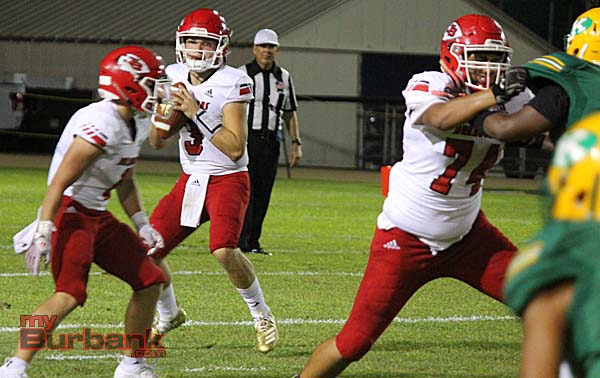 The Indians came out and found the end zone on their first series as senior quarterback Nicholas Garcia capped the 80-yard, 12-play trek with a 15-yard strike on fourth and goal to senior wide receiver Carson Cardenaz, who grabbed three scoring passes, as 6:46 remained in the opening quarter.

Garcia finished his work by throwing four touchdown passes and adding two rushing scores, but was intercepted twice, the first time he has been picked off this season.

The Fighting Irish (1-2) cut the lead to four points on a 35-yard field goal with 3:23 left on the clock in the initial period.

Garcia’s second scoring toss went to Cardenaz (85 yards on six receptions) and covered 14 yards as the Indians’ lead became 14-3 and 1:59 remaining in the second quarter. 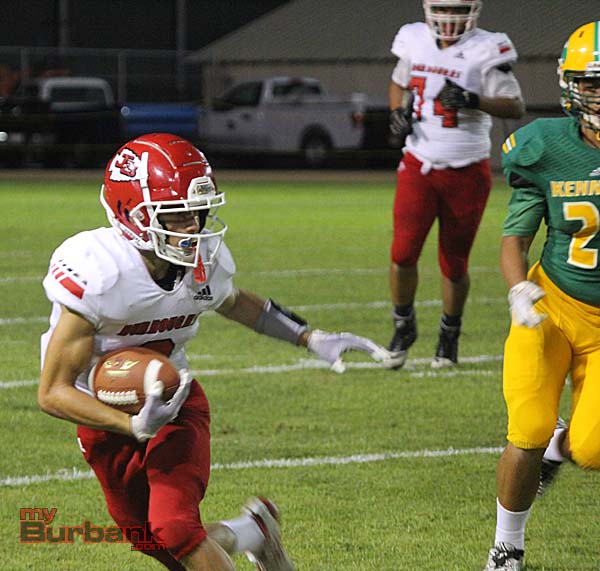 Sophomore running back Jon English had a solid outing for the Indians. (Photo by Steve Garden)

Burroughs (3-0) spurted ahead by 18 points just before halftime when Garcia burrowed into the end zone from one yard out.

This march commenced at the Burroughs 45-yard line and saw the Indians use only four plays.

Kennedy (299 total net yards) then drew within 21-10 when Garcia (20 of 40 for 264 yards) was intercepted by junior defensive lineman Jequen Bedgood, who raced eight yards for the score with 11:32 left in the third quarter.

The Indians took control 28-10 when Garcia orchestrated a 12-play, 72-yard drive and eventually drilled Cardenaz on a five-yard strike and 7:12 showing in the third period.

“Pressure-wise, I don’t feel like it’s that bad,” said Cardenaz of trying to improve each week. “Coaches are hammering us and hammering us. That’s the only way we’re going to get better. Every week we’re going to come out in practice and try harder. As the weeks go on, we do have to get better. I feel like our team’s got this. We’ve got the confidence. Just focus and grind it.”

Cardenaz didn’t play football last season. Why did he return to the team this season? “I decided to come back because last year, when I took it off, I came to the games, of course to support my guys,” he said. “It was kind of hard watching them play without me. I realized how much I missed the games. I focused on hoops, and then I decided to come back.” 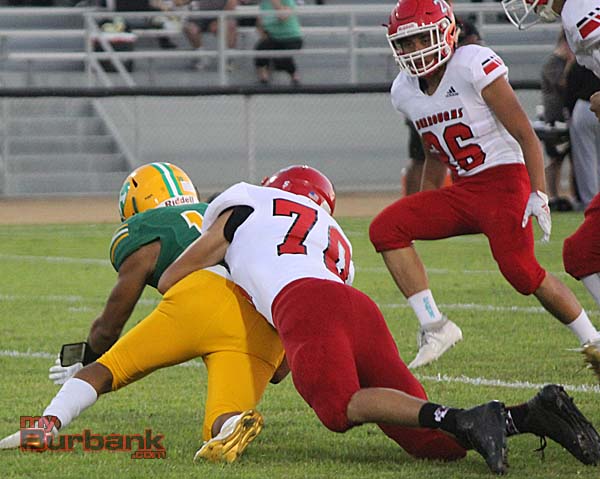 Burroughs extended its lead to 34-10 when Garcia’s four-yard laser found Alajijian with 2:44 left on the ticker in the same stanza.

The Indians (448 total yards) capped their offensive output for the evening with a one-yard keeper from Garcia and 1:38 remaining in the game on a 40-yard march that consumed six plays as the advantage became 41-10.

Kennedy rallied for two scores in the fourth quarter when senior field general Ryan Cathcart zig-zaged his way 49 yards to make it 41-17 as 10:05 was left.

Cathcart’s 65-yard pass to senior wide receiver Aidan Frieson with 5:40 left made it a 17-point deficit.

Burroughs will once again be on the road next week for a nonleague match on Friday against Harvard-Westlake.