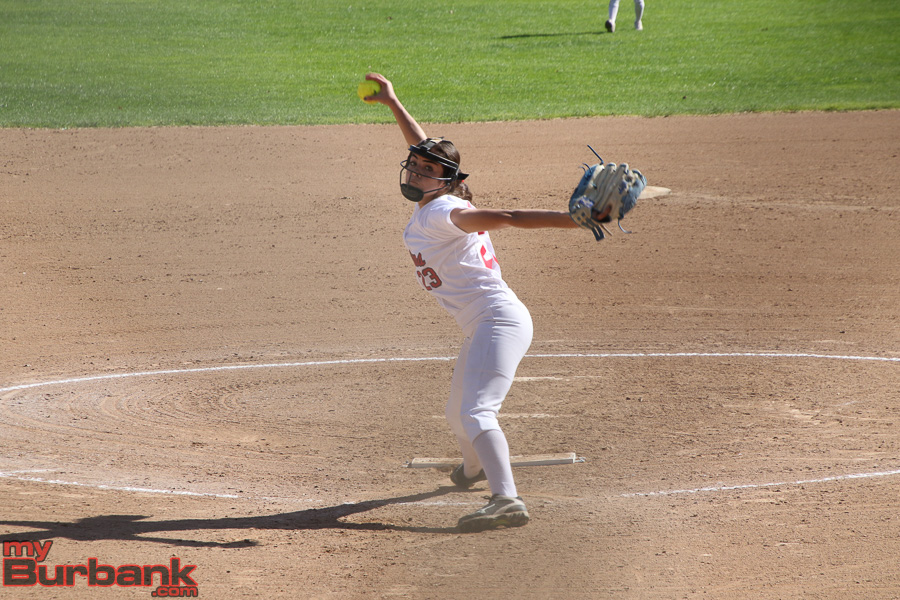 On Tuesday afternoon at Olive Park, the Burroughs softball team found out exactly just how tough the sophomore is after taming the Indians 5-0 and throwing a one-hitter across seven frames in a Pacific League game.

Hernandez didn’t allow a hit until the fifth inning when senior Hannah Skinner lined a sharp single to left field.

What followed were three consecutive outs as junior Chloe Bookmyer flied to left field, senior Mia Storer popped to second base and senior Sierra Harvey grounded to second base.

“It’s CV. They’re a good hitting team. They’ve got a good pitcher. It’s all mental,” said Burroughs coach Wes Tanigawa, whose team is 3-4 and 2-1 in league. “The girls just gotta learn how to focus better.”

Tanigawa then added: “They feel pressure because they know this is a really good pitcher and they want to show they can do something,” he said. “They just have to learn to slow down the game.”

Hernandez toiled seven effective innings, struck out seven batters without issuing a walk and seemed cool as a cucumber.

“We’re just grinding,” said Crescenta Valley coach Amanda Peek, who saw the Falcons improve to 9-2-1 and 2-0 in league. “The girls didn’t come out like they wanted to today. Dee Dee’s a grinder. Our girls who show up daily, showed up today.”

Hernandez worked a perfect second inning as Skinner grounded to first base, Bookmyer bounced to second base and Storer fanned looking.

Harvey led off the third inning by grounding to shortstop, senior Citlali Mendez, who came into the game as a replacement for senior Lauryn Valenzuela at shortstop, then lined to shortstop and junior Memorie Munoz struck out swinging.

Hernandez worked a 1-2-3 fourth frame, fanning Acosta and Kam swinging and then getting Englebrecht to bounce back to the box.

Kam opened the seventh inning by bouncing back to Hernandez, senior pinch hitter Morgan Mersola struck out swinging and Skinner popped to third base for the game’s final out.

The Falcons’ offense started off early against Acosta, who was making her first start against the defending league champions.

Acosta was admittedly nervous before her outing, but throws hard and accurate and seemed confident in the circle.

In four innings, Acosta, who will learn how to throw a changeup, allowed six hits with three strikeouts and one walk.

Crescenta Valley collected just one hit off Acosta in the first inning, but it produced two runs as freshman Izzy Jamgotchian lined a double to left field as senior Alyssa Hernandez, who was safe on an error and Hernandez, who walked and had a pinch runner enter for her, both scored to make it 2-0.

Alyssa Hernandez and sophomore Stephanie Wichman each collected two singles for the Falcons.

Jamgotchian advanced to third base on a sacrifice bunt from senior Kristy Taix and crossed the plate for a 3-0 lead when senior Peyton Hause was safe on the second error in the inning.

The Falcons added a run in the fourth inning to make it 4-0 when sophomore Morgan Eng drilled a single down the line in the left field, stole second base and scored on an error.

Crescenta Valley waltzed in front 5-0 with a run in the sixth as Dee Dee Hernandez’s two-out grounder brought home Wichman, who was safe on an infield hit.