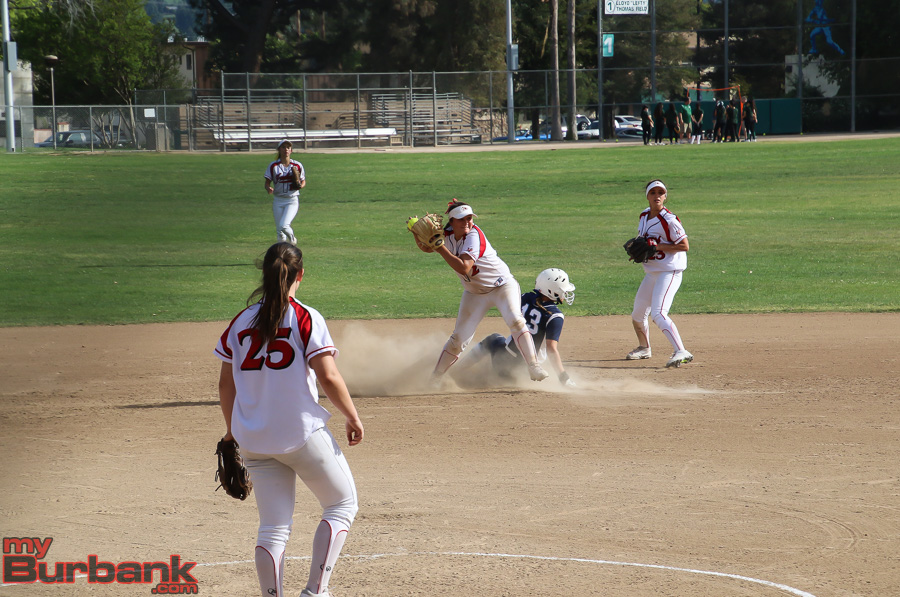 There was much riding on the outcome of Thursday night’s Pacific League softball clash between Burroughs High and Burbank at McCambridge Park.

A win by the Indians would assure them of a first-place tie with Crescenta Valley, and a victory by the Bulldogs would give them fourth place, one game ahead of Glendale and a CIF Southern Section playoff berth.

In the end, junior Presley Miraglia was simply too good and in control, striking out 11 and yielding four hits in a 6-0 complete-game shutout in the regular-season finale as the Indians secured a share of a third straight league title.

“Any time we go into a game, we feel good,” first-year Burroughs coach Wes Tanigawa said. “The way they were focused and settled down, I felt good.”

The Indians (19-8 and 12-2 in league) scurried in front 1-0 in the fourth inning against sophomore Alyssa Porras and added five more runs in the sixth.

The initial tally started when Miraglia (three singles) reached base on an error. Sophomore Citlali Mendez then came in to pinch run and moved to second base on sophomore Mia Storer’s infield hit.

Burbank (12-14 and 8-6 in league) fell behind 6-0 after the five-run explosion that began with a base hit by Miraglia to left field. Once again, Mendez ran for her.

Junior hurler Allie Benson replaced Porras and faced Storer, who was safe on an error.

Pinch hitter Kaitlin Escamilla, a sophomore, drew a walk to load the bases and Ricciardella was hit by a pitch which forced in a run.

The key blow was delivered by senior Amanda Flores (two hits), who clubbed a two-run double to right center.

“It got away from us,” Burbank coach Mike Delaney said. “We simply made too many key mistakes.”

Miraglia worked a perfect first and fanned all three batters before allowing a one-out single in the second inning to right center by junior Erin Lashkari, who went to second base on sophomore Sarah Garelick’s sacrifice bunt.

But Miraglia then collected herself and struck out junior Macie Jensen swinging.

Miraglia then fashioned a 1-2-3 third and fourth inning, striking out freshman Katie Treadway in the third and fanning junior Anysia Gonzalez in the fourth.

“My pitching coach worked with me to get my pitches down,” Miraglia said. “I needed to fix my level of pitches. I knew what I had to do.”

Delaney admitted that Miraglia was throwing hard and also keeping the ball down, but said they were perhaps too anxious. “We didn’t decide what part of the plate to swing at,” he pointed out.

Miraglia retired Lashkari to open the fifth inning on a liner to center field and then struck out Garelick looking.

Jensen reached first on a miscue and then stole second, however, Miraglia settled down and induced junior Bene Snyder to line out to first base.

Miraglia whiffed sophomore Amaya Broyls, but allowed a single to left by junior Melissa Daniel, only to strike out Gonzalez swinging.

Miraglia induced Lashkari to ground out to begin the seventh, but Garelick laced a single to right center.

Jensen popped up for the second out and Snyder grounded out to seal the victory.

Porras allowed seven hits and struck out two with two walks in seven innings while Benson walked a batter, hit a batter and gave up one hit.