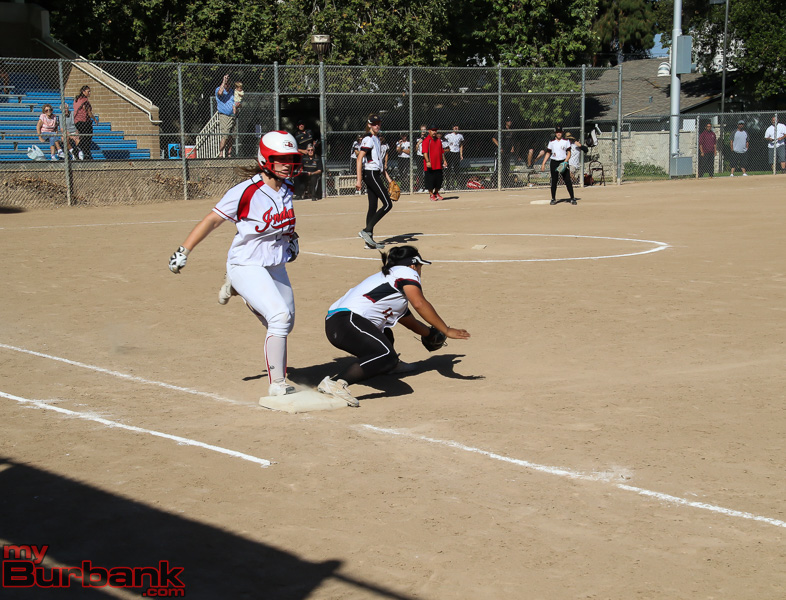 Making the jump to the CIF Southern Section Division I was going to take a leap of faith for the Burroughs High softball team.

When the Indians settled in versus Oaks Christian in an opening-round playoff game Thursday afternoon at Olive Park, an early deficit to the powerful Lions became even bigger and eventually proved insurmountable in a 7-1 loss.

Burroughs (19-9 and 12-2 for a share of first place in the Pacific League) collected just five singles off sophomore Lexi Berg, who worked seven innings while striking out four and walking two.

“Last year we didn’t have to start at the top,” said Burroughs coach Wes Tanigawa of the tough draw. “The girls jumped in with both feet and had to play a really good team in the first round.”

Trailing 7-0 heading into the seventh inning, the Indians, who were in Division II last season, sent seven batters to the plate and cut the Lions’ lead to six runs.

With one out, sophomore Mia Storer, who singled with two out in the fourth inning and was left stranded when junior Jessica Amaya (two hits) grounded out, walked and moved to second base on Amaya’s single to center field.

Freshman Chloe Bookmyer entered as a pinch hitter and was safe on a fielder’s choice as Storer advanced to third base and came around on an error.

Junior Nikki Ricciardella also singled in the seventh, but sophomore Kaitlin Escamilla and sophomore Morgan Mersola both struck out.

Brianna Johnson played her final game for the Indians and was disappointed at how the season ended.

“In our league, we don’t face that type of pitcher,” said the senior third baseman of the hard-tossing Berg. “They’re a good team and they know how to play.”

Miraglia yielded 11 hits including four for extra bases, fanning four and walking one across seven innings.

Junior Kaitlin Simonsgaard was safe on a fielder’s choice as Brady took second base and advanced to third base and eventually scored on a throwing error.

Simonsgaard also eased into second base on the miscue and then crossed the plate on sophomore Taylor Johnson’s grounder.

Oaks Christian’s lead ballooned to 5-0 after a three-run fourth when freshman Felicia Quezeda (two hits) lined a bullet into left center that turned into a homer.

Junior Olivia Lucchese sliced a single to right field and moved to second base on a one-out sacrifice by sophomore Brooke Snyder.

Brady’s single to left center plated Lucchese and after Brady stole second base, Simonsgaard’s triple to left field scored her.

Two innings later, the lead swelled to 7-0 as the Lions (26-5-1 and 11-4 for a second place tie in the Marmonte League) sent six hitters to the plate and scored two runs.

Simonsgaard had a run-scoring triple to right field that scored sophomore Emily Justman, who came in as a pinch runner for Berg, who led off the frame with a double to right center.

Oaks Christian Coach Peter Ackermann wants his team to be aggressive at the plate.

“I tell them to get a pitch you can hit and swing away,” he said. “I don’t give them too many take signs.”

Berg retired the side in order in the first and sixth inning, but allowed a two-out single to right by Miraglia in the fourth inning, but Storer then bounced out.