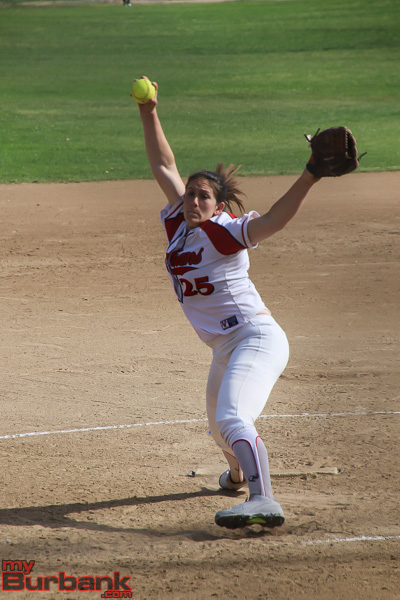 Presley Miraglia made her season debut in the pitching circle for the Burroughs High softball team a memorable one.

The senior right-hander handcuffed Arcadia 3-2 in a Pacific League match at Olive Park on Tuesday and also escaped a tricky seventh inning when the Apaches had the tying and go-ahead runs in scoring position.

With one out, Miraglia induced junior Dejah Westbrook to bounce back to the box and senior Susan Harrison then popped up for the final out.

In that frame, freshman Caitlyn Shen led off with an infield single.

Junior Leah Silva’s sacrifice bunt moved Shen to second base and a throwing error saw Shen dash to third base.

When freshman Averi Wong (two hits) singled to right field, the Indians’ lead was sliced to 3-2.

Miraglia, who missed the early portion of the schedule because of grades, was able to successfully raise her grade-point average and became eligible last week.

“I wasn’t really nervous today. I was just really excited to be back,” Miraglia said. “I came back just thinking, okay, I’m just going to be here for the team.”

Miraglia was asked if she gave much thought to the seventh inning? “I try not to think about that,” she said. “I’m just focusing on the batter.”

“[Pres]ley coming back out, that’s just a help for everybody,” Burroughs coach Wes Tanigawa said of his ace hurler who has been offered a softball scholarship to Long Beach State. “She came through with her timely pitches and got key outs when we really needed them.”

Tanigawa added: “That was the big thing. They were making hits,” he said. “They were good hits and one bad pitch. All it’s going to take was one good hit.”

The Indians (5-3-1 and 4-1 in league) struck early against freshman Sophia Garzona, who allowed seven hits, one walk, one strikeout and one hit batter across six innings.

Senior Hannah Talavera reached base on an infield hit and junior Mia Storer lined a single to left field.

Miraglia popped up for the initial out, but sophomore Chloe Bookmyer singled to right center as Talavera scored to make it 1-0 in the first inning.

Senior Jessica Amaya then laced a single to center field as Storer crossed the plate for a 2-0 edge.

In the second inning, the lead swelled to 3-0 as sophomore Memorie Munoz walked with one out.

After Talavera bounced to second base for the second out, Storer’s two-base hit to left field scored Munoz.

The Apaches (5-7 and 2-3 in league) finally found the scoreboard in the sixth inning as Westbrook led off with a single to right center.

When Harrison flied to right field, senior Nicole Puente (three hits) followed with a double to left field that made it 3-1.

“Play with heart and be competitive and stay in the game,” Arcadia coach Richard Klumpp said of his team motto.

Klumpp was more than satisfied with his young pitcher. “She battled. She’s playing with the big girls. I just give her 100 percent support,” he said. “I’m really proud of her. She’s the heartbeat of the team.”

Miraglia had five strikeouts through three innings and worked a perfect first inning that included striking out Wong.

Miraglia faced four batters in the second as Puente singled to left with one out, but then fanned junior Karly Gillis and junior Helena Simpson.

In the fourth inning, Miraglia hit leadoff hitter Harrison and gave up a base hit to Puente, but retired Gillis on a pop up, Simpson on a grounder and struck out Garzona.

Miraglia went 1-2-3 in the fifth inning as Silva struck out looking, Lau popped up and Wong grounded out.