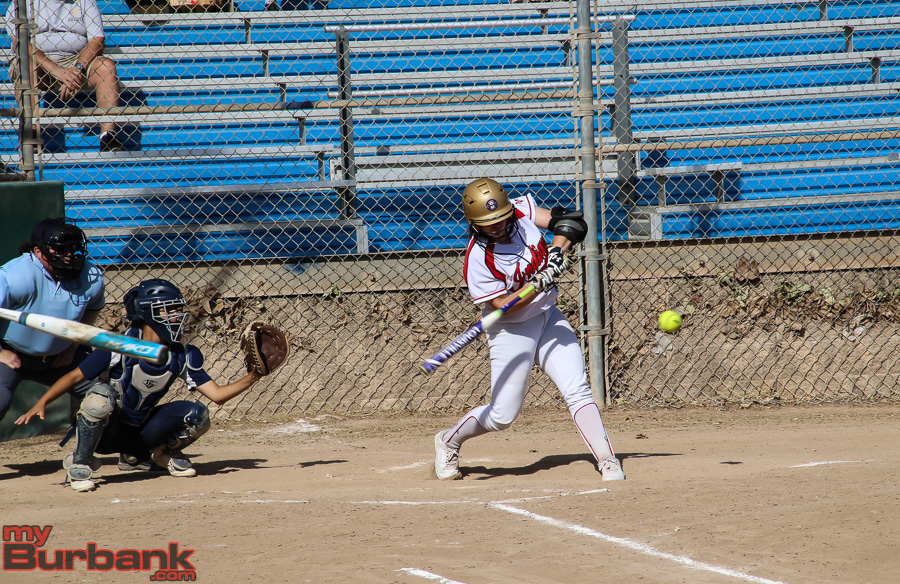 On three occasions, the Burroughs High softball team loaded the bases without scoring and in the eighth inning had the tying run at third base and the winning run at second and also failed to score.

Too many opportunities without locating home plate resulted in a 5-4 setback in eight innings to Crescenta Valley in a Pacific League contest on Tuesday at Olive Park.

Each team entered the fray without a loss in league play, but the Falcons were able to score with timely hitting.

“They don’t fully understand that when they’re ahead in the count that they need to make something happen,” Burroughs coach Wes Tanigawa said. “They need to seize the moment.”

Tanigawa, the first-year skipper, went on: “We don’t have to hit home runs,” he noted. “Just drop the ball in the holes. That’s all we need to do.”

The Falcons (9-5-1 and 3-0 in league) plated the winning run off junior pitcher Presley Miraglia, who allowed a one-out double to left field by senior Jessica Yzaguirre (four hits including a double) and a two-out, run-producing single to sophomore Viviana Bocanegra.

In the bottom half of the final frame, sophomore Mia Storer collected a base hit to right field and advanced to second base on a wild pitch.

Junior Jessica Amaya (two singles) reached on a fielder’s choice as Storer moved to third base, but senior Amanda Flores fouled out to first base to end the threat.

“With our hitting, sometimes we struggle a lot,” Tanigawa said. “I tell them that they’re softball players. They know what to do.”

The Indians (9-7 and 2-1 in league) fell behind 1-0 in the first inning off Miraglia, who went the distance while allowing seven hits with six strikeouts and no walks.

With one out, Yzaguirre singled to left field and scurried to third base on an error when sophomore Peyton Hause laid down a sacrifice bunt and then scored on Bocanegra’s grounder.

Crescenta Valley’s advantage became 4-0 in the third inning when Yzaguirre delivered a two-run single to center field that scored sophomore Ryan Eldred, who led off with a walk and sophomore Alyssa Hernandez, who doubled to left center.

It became 4-0 on Bocanegra’s base hit to right center as Yzaguirre crossed the plate.

The Indians finally scored off junior hurler Emily Mulcahey in the third inning when junior Nikki Ricciardella tripled to center field to lead off the frame and came around on a grounder from sophomore Kaitlin Escamilla.

Junior Hannah Talavera also singled to left field, took second base on a base hit from senior Lauren Lopez and moved to third when senior Brianna Johnson was hit by a pitch.

However, Miraglia then bounced into a force out and Storer flied out to center field.

Burroughs sent seven batters to the plate in the sixth inning and cut the lead to 4-2 as Lopez’s single to left field drove in Escamilla, who doubled to left field with one out and then stole third base.

A two-run seventh inning pushed the match into extra innings as Talavera’s double to left field scored Ricciardella, who reached on a force out and Escamilla, who was safe on an infield hit.

Miraglia worked a perfect second, fourth, sixth and seventh inning and had a stretch where she retired nine straight batters until Yzaguirre’s double to left in the eighth inning.