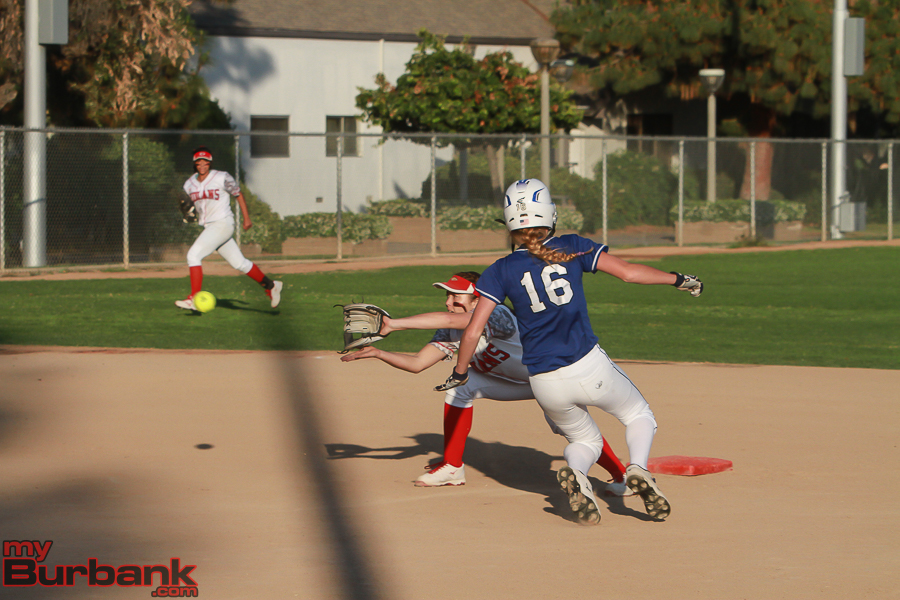 In sports, emotion often plays a significant role and it did for five-plus innings of Monday’s Pacific League softball game at Olive Park.

Burroughs High came in having already clinched the league banner while rival Burbank was tucked solidly in fourth place.

All of this didn’t matter as the Indians held a slim one-run lead heading into the bottom of the sixth inning when they erupted for four runs and waltzed to a 7-2 win.

The two will face off once again on Wednesday at McCambridge Park with a 6 p.m. start time.

“The girls feed off each other,” Burroughs coach Doug Nicol said. “These girls compete. But I told them that Burbank wasn’t going to lay down. In these kinds of games, the best team doesn’t always win.”

It was a back-and-forth affair between Burroughs’ ace Presley Miraglia and Burbank’s top hurler Allie Benson.

After a few times through the batting order, the Indians nicked Benson, who went five innings while allowing eight hits with three strikeouts and two walks, for three hits and two walks with an error in the sixth.

The frame began with Miraglia pushing a single to right field while Brianna Johnson was safe on an infield hit back to Benson.

Isabel Frias reached on an error which filled the bases and Amanda Flores walked to make it 4-2.

The big blow was Destiny Velasquez’s bases-clearing triple to right center that prompted Burbank Coach Mike Delaney to bring in Reace Rushing with none out.

For two innings, neither team managed a hit or a run until Desiree Gomez singled with one out in the third inning for the Bulldogs.

Gomez was caught stealing on a terrific throw from Devellano, the catcher to Kaitlin Okimoto, the shortstop.

“This is my fourth year playing in these games,” said Okimoto, who will be attending Brown University. “I try to think about it as just another game. I take a deep breath and try to relax.”

Miraglia, who toured seven innings, surrendered five hits with 12 strikeouts and no walks, then fanned Alex Davis for the third out.

In the bottom of the third, the Indians (20-4 and 13-0 in league) scored two runs on four hits as Benson allowed a double to right center by Velasquez, who led off the inning.

Devellano then struck out, but Talavera singled to center field. Lopez’s infield hit made it 1-0 as Velasquez crossed the plate, and after Okimoto popped up for the second out, Miraglia lined a single to right field that plated Talavera.

Burbank (11-15 and 8-5 in league) cut the deficit in half with a run in the fourth inning when Emily Monterrey’s double brought in Emma Kerr, who singled to right.

Julia Duarte, who will be attending the University of Pennsylvania, lashed a base hit up the middle, but Kerr and Duarte were both left stranded when Miraglia struck out Macie Jensen and induced Amber Ingram to line out back to the box.

The Indians increased their lead to 3-1 with a run in the fifth inning after Lopez’s two-out double to left field scored Talavera, who walked.

Refusing to quit, Burbank trimmed the lead to 3-2 in the sixth inning when Cailey Stevenson lined a hard-hit ball over the head of left fielder Frias for a home run.

“I’m really proud of them,” Delaney said of his team. “We battled. Allie pitched her heart out. Presley threw a good game, but we were getting into too many negative counts. We couldn’t lay off the high stuff, but you can’t strike out 12 times and expect to win.”