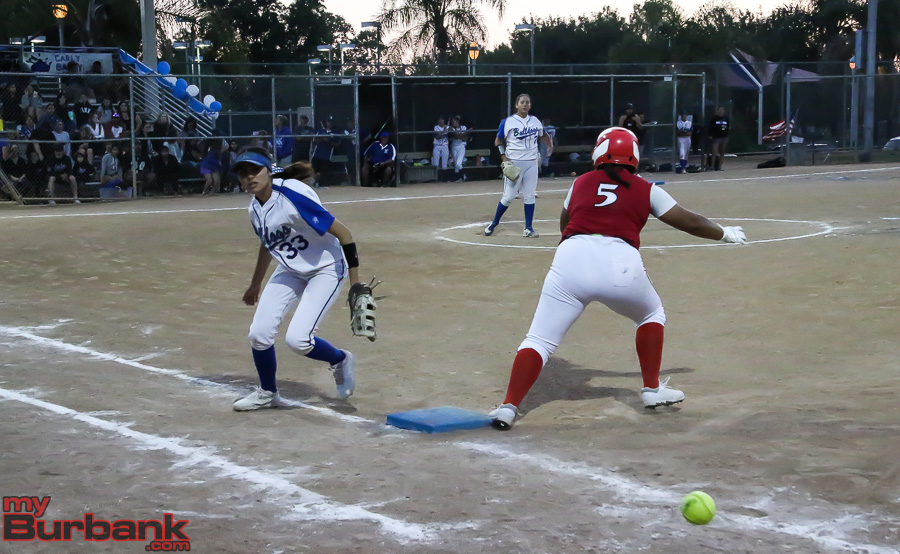 After the final out was recorded on a grounder to third base, the Burroughs High team and its faithful were elated after a 7-1 win over city rival Burbank.

Of course, there was dejection in the Bulldogs’ dugout, but at least one game remains when the CIF Southern Section playoffs begin with sites and matchups to be determined in the next few days.

The Indians (12-10 and 10-4 in league) also have an important postseason game next week.

The contest was nip-and-tuck after three innings as the Indians led 2-1, but a run in the sixth inning and four runs in the seventh would put the game out of reach.

Junior pitcher Isabella Kam was in the circle and hurled with cool confidence, allowing no hits in the second, fourth, fifth and seventh inning.

“Yes, honestly I was in the beginning because it was my first actual Burbank-Burroughs game where I’m pitching,” said Kam, who went seven innings with five hits yielded, five strikeouts and two walks of her early nerves. “It was kind of nerve-wracking for me, but I had a few girls calm me down and that was the most important thing, calming down.”

The Indians forged ahead 3-1 with a tally in the sixth inning as junior Sabrina Englebrecht’s single to center field off senior Alyssa Porras scored junior Chloe Bookmyer, who drew three walks and led off with a base on balls.

Porras has been a workhorse and was on Thursday, touring seven frames, giving up eight hits, walking three and striking out two.

“Last year Allie [Benson] motivated me so much because I always wanted to be the pitcher. I always wanted to start every single game. This season, everyone was hurt. Savannah [Benson] was hurt, Alex [Davis] pitched, played center and short,” Porras said. “I have to act like I wasn’t tired even if I was just so I could finish the game.”

The next inning was the backbreaker as Burroughs trotted eight hitters to the plate that included a two-run single to right center from senior Sierra Harvey (two hits) and a two-run base hit to left field by senior Megan Williams (three singles).

In the third, the Indians marched ahead 2-0 on a two-run homer by Kam as junior Memorie Munoz came around to score after reaching on an error.

“I’m just so happy that I did really well,” said senior Mia Storer, the center fielder who had tears in her eyes. “I’m so happy. I’m a four-year player and this means so much for me and to play really good in the last Burbank-Burroughs game. This will stay with me forever.”

“It’s always tough to lose your final league game on your home field,” Burbank coach Mike Delaney said. “At some point we didn’t do what we were supposed do to.”