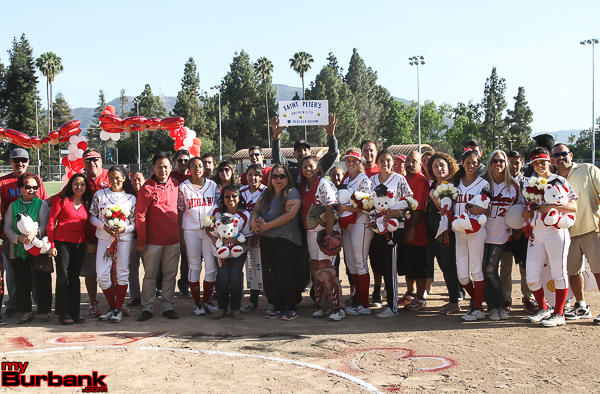 Senior Night for the Burroughs Indians (Photo by Ross A. Benson)

It was only fitting that the final regular season game between two fantastic teams would go extra innings. When it was all said and done after a pitcher’s duel for the ages, Burroughs won in eight innings in dramatic fashion against Burbank, 1-0, to claim a share of the Pacific League title.

It was the Lady Indians first league title since 2012 before the Lady Bulldogs won in 2013, 2014 and 2015. On this day, the Indians celebrated. On this season, both teams were crowned league champions with identical 13-1 records.

“I think this is the best moment in high school because we knew that we could beat them this time and we finally did it,” Burroughs senior Delaney Nicol said. “We’ve accomplished so much and the whole moment is so exciting.” 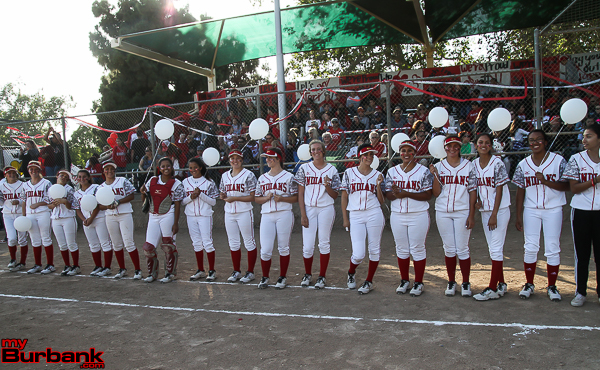 Brianna Johnson’s one-out single up the middle set off pandemonium for the Burroughs faithful that included Coach Doug Nicol prancing around in pure elation and then performing a dance rendition known as the “Whip” with his team whooping and hollering to every move as he grooved in the circle.

“I don’t care if it looked bad. We are league champs,” Nicol said. “One of the greatest wins of my life. Just incredible.”

Back on April 23, things looked bleak for Burroughs (22-4) after suffering an 8-0 loss at the hands of Notre Dame-bound Caitlyn Brooks and the Burbank Bulldogs. Fast forward three weeks later and the Indians came of age to deal Brooks a rare loss while snapping the Bulldogs’ 41-game league winning streak in the process. 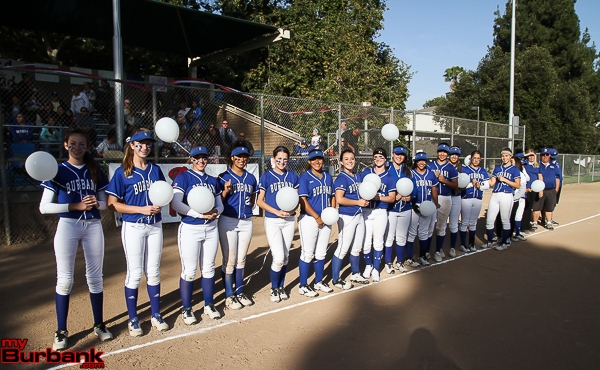 Burbank’s last loss in league was on May 10, 2012, when the Bulldogs lost, 2-1, in eight innings, ironically, to Burroughs giving the Indians a third straight league title at the time.

Burroughs pitcher Presley Miraglia arguably turned in her best performance of the year shutting down the Bulldogs’ potent offense to zero runs on four hits, walking no one and striking out three in eight innings. Her 180 degree turnaround from the previous outing against Burbank (20-4) was pure bliss for the freshman ace.

“The first time I played them I was so nervous. I was worrying about everything else but pitching,” Miraglia said. “Tonight I really focused in on every batter. I felt so confident. To go from last time when they were hitting shots off of me to this is so amazing. I really wanted to win for the seniors since this was their last Burbank-Burroughs game.”

Miraglia matched Brooks pitch-for-pitch as the team battled to a 0-0 scoreless game for seven and one half innings.

“For a freshman to come out there and battle Caitlyn (Brooks) pitch-for-pitch and pitch just as well with the whole support of her team was phenomenal,” said the elder Nicol. 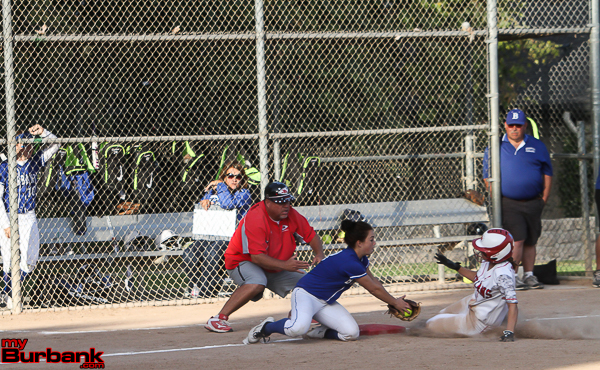 The Burroughs Indians slid safely by the Lady Bulldogs to capture a share of the league title (Photo by Ross A. Benson)

An error followed by back-to-back walks from Brooks loaded the bases with one out. Johnson calmly drove a 1-2 fastball right back up the middle scoring Michelle Santiago with the winning run.

“I just kept telling her to put the ball in play. I kept telling that to her over and over after each pitch. And she did it,” said Nicol, who won his fourth league title as coach. “She put it on the ground and let the ball do the work. For a sophomore to do what she did, we have so much faith in her.”

Johnson, a sophomore third baseman who recently broke into the starting lineup, knew that when she walked up to the plate, a league title was waiting only 60 feet away.

“I thought about it but I just wanted to push it out of my mind and not put too much pressure on me,” Johnson said. “With two strikes on me, it was just drive it up the middle. It felt amazing and especially against Caitlyn Brooks. I was nervous but I got it done and I’m happy about that.”

Brooks finished the game with 13 strikeouts on a four-hitter. It was a moment where the torch was passed from Brooks to Miraglia who earned the biggest win in her young and promising career.

After the eight-run loss to BHS a few weeks ago, the Indians regrouped and vowed to come back a stronger team. From the first pitch to the walk-off hit, Burroughs improved leaps and bounds and now enters the CIF playoffs on a role having shutout four straight opponents. 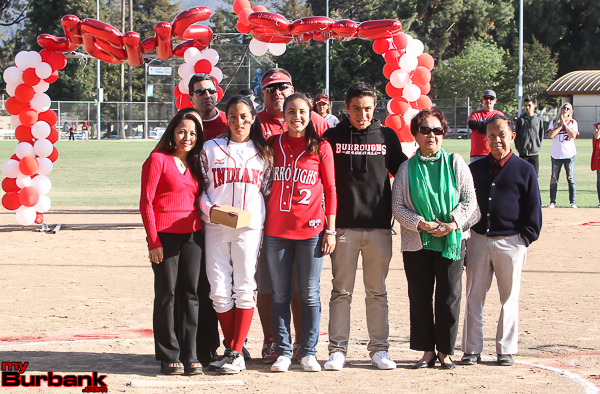 Delaney Nicol and family (Photo by Ross A. Benson)

“You saw it on the field. The growth has been incredible. They could have given up,” Nicol said. “After that game we had a big pow-wow on the field, they practiced the next day and we asked them, ‘What do you want to do? Where do you want to go?’ And they all said, ‘We are ready to go, coach.’ They worked hard every practice and these girls earned it.”

Across the diamond, the Bulldogs struggled to find consolation after a tough defeat but Coach Mike Delaney shared his message to the girls as they move on to the CIF playoffs hoping to make a deep run.

“It was a great game. Both pitchers pitched well but one team played better defense. That was the difference in the game,” he said. “We had our chances, they had their chances and they earned it.

“One thing we can’t lose sight of is that we are league champions. It’s three years in a row and we’ve had an incredible run. They (Burbank) don’t understand right now how hard it is to do what they did. 41 wins is a big pressure thing. At some point it was going to end. Maybe this is what we needed. We need to get some fire back in our belly. We can’t assume we will go out every time and shut out everybody. We’ve become complacent with our hitting and we have some things to fix. They will do it and we will be fine.”

The CIF playoffs will be announced Monday afternoon with games beginning later in the week.