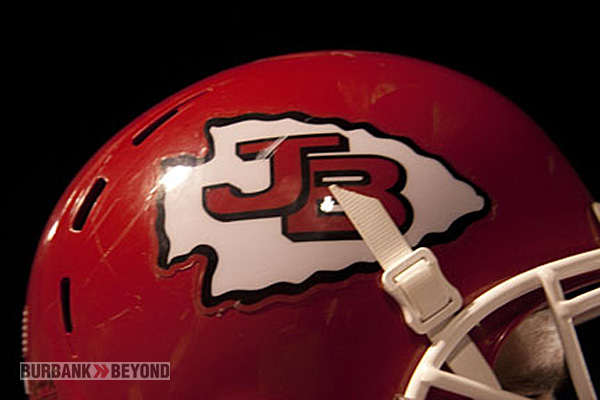 Bigger, faster, stronger. Host Camarillo was all that and more as they physically punished Burroughs on Friday night, 50-13. The Scorpions applied their sting early and often as they outmanned a young Indians team searching for an identity.

“They were just physically better than us tonight. They are just bigger and stronger,” Burroughs Coach Keith Knoop said. “You can’t get your gears going. Everything you do you get punched in your mouth. We are not going to see a team like that in league at all. They are a good team and I’m glad we scheduled them.”

One look at the Burroughs offensive stat sheet summarized the game. Eleven possessions, seven punts, a lost fumble, an interception and two touchdowns.

Burroughs (0-3) began the contest with possession on its own 44-yard line. A few plays later, quarterback Angel Manzanero was sacked and lost the ball. The Scorpions recovered the fumble and returned it 40 yards for a score and an early 7-0 lead.

After forcing the Indians to punt on the ensuing possession, Camarillo drove 40 yards in four plays and scored on a one-yard run by Raymond Thomas for a 14-0 advantage with 4:46 left in the first quarter.

The Indians got right back in the game when Josh Storer broke up the middle untouched for a 55-yard touchdown run that cut the lead in half late in the first quarter. Storer was the lone bright spot for the Indians offense as he gained 73 yards on eight carries for the night.

That’s as close as Burroughs got. The Scorpions’ aggressive defense forced JBHS into poor field position time and time again.

The decisive blow occurred after the Scorpions intercepted a Manzanero pass and quickly converted it into a 36-yard touchdown pass from quarterback Travis Valdez to Phillip Pizzo. It gave them a commanding 36-7 lead with only 13 seconds remaining in the first half.

Valdez completed 23 of 35 passes for 302 yards and three touchdowns.

The Indians turned to receiver Oharjee Brown to play quarterback in the second half to spark the inept offense. Three possessions and three punts later, Burroughs was down 43-7 to end the third quarter. A running clock was utilized in the final period.

“We need to go back to practice and go harder than we usually do,” Brown said. “We have to go 100 percent and not 50 percent. We need to bond better and everything needs to be more crisp.”

Brown had a positive attitude after his team’s third consecutive defeat to begin the 2012 campaign. He has played receiver and quarterback this season in an attempt to jumpstart a struggling offense.

“It’s really difficult. But I got to step up,” Brown said. “If Coach (Knoop) asks to me to go to whatever position, I won’t complain. Even if it’s right tackle. I just got to do whatever gives our team the best chance to win.”

With starting quarterback Andrew Williams still sidelined due to an ankle injury, Burroughs is searching for a quarterback with consistency and production.

Burroughs now enters Pacific League play on Friday evening at Memorial Field against co-defending league champion, Arcadia. Like the Indians, the Apaches are 0-3 and looking for that elusive first victory of the year.

“Now it is league and it’s a fresh start. We are 0-0,” Knoop explained. “It’s for all the marbles now. You cannot afford to play poorly and have mistakes. We have to get better really, really fast.”

The Pacific League is up for grabs. All eight teams have combined to go a dismal 6-18 through the first three weeks of the season. If Burroughs wants to win a fourth consecutive league title, attention to detail, leadership and a more determined effort will be needed to secure another championship.

“We need to find that spark and leader,” Knoop stated.

In other action, Burbank lost a heartbreaker on the road, 21-14, to Inglewood High School.  Leading 7-6 at the half, Burbank (1-2) committed a game-changing mistake on its first possession of the second half that allowed Inglewood (1-2) the opportunity to capitalize. A bad snap on a punt gave the Sentinels first and goal from the Bulldogs 7. One play later Inglewood scored and made the 2-pt conversion to take a 14-7 lead.

Bulldogs running back James Williams scored on a one-yard run to tie the game at 14 apiece late in the third quarter. Neither team scored in the fourth period which set up the dramatic overtime session.

Burbank won the toss and elected to go on defense first. Inglewood drove 25 yards in four plays to take the 21-14 advantage. Back came the Bulldogs only to let another mistake cost them the game. On the third play from scrimmage, quarterback Zak Tomlinson fumbled at the 10-yard line and the Sentinels recovered on their two-yard line to secure the win.

Burbank now hosts Hoover (2-1) on Thursday night at Memorial Field in the Pacific League opener for both teams.