It was a determined effort none the less. With three starters sidelined due to red cards from its previous game against Pasadena, the Burroughs boys soccer team played valiantly in a 2-1 loss to Crescenta Valley on Friday afternoon at Memorial Field.

Pablo Sotillo broke a 1-1 tie with a goal in the 73rd minute of action that gave the Falcons the big win. Sotillo was in the right place at the right time scoring amidst a scrum of players. 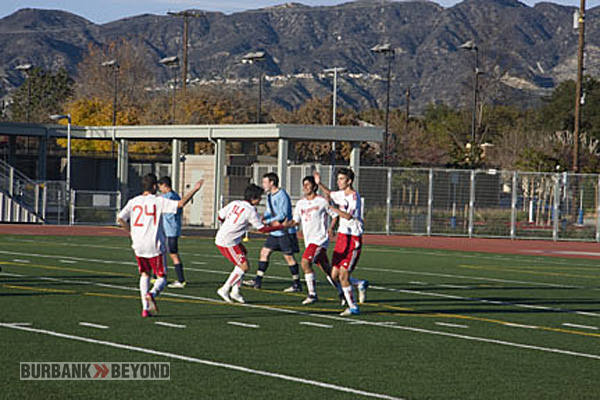 The loss by Burroughs left the Indians with an overall mark of 5-5-2 and 2-2 in the Pacific League. Crescenta Valley, the three-time defending league champions and Division IV CIF champions, improved to 13-1-4 and 3-0-1 in league.

“We gave up one late but hand it to CV. They are a very good team,” Burroughs Coach Mike Kodama said. “They had a chance to put it away at the end and they did. But we will be back. We will be fine. We have a long ways to go yet.”

The two teams played even until the 19 minute mark of the first half when Sotillo used his knee to score a goal off a throw-in by Erick Trejo.

Two minutes later Burroughs struck when Chuy Nunez headed in a rebound off a miss shot from Nolberto Alcantar. The initial shot went off of CV goalkeeper Josh Cook, then off the far left goal post and into the air where Nunez alertly saw it and headed the ball into the net. 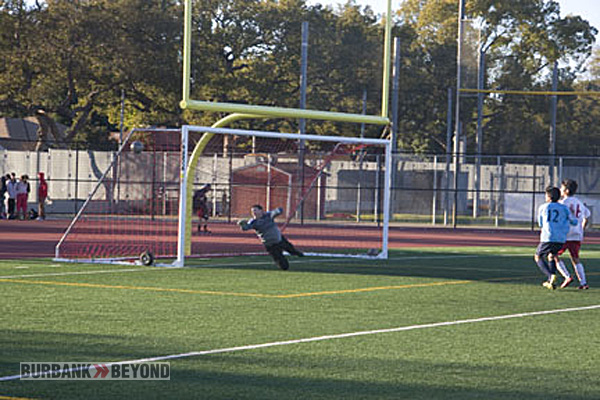 The Indians’ Elliot Whitecotton had a strong game in goal making one spectacular save after another including a diving save to his right in the first half off an indirect kick and stopping a Crescenta Valley breakaway in the 66th minute by Sotillo.

Burroughs has suffered back to back 2-1 defeats to Pasadena and CV. Kodama, who has won seven league titles in 23 years at the helm, has plenty of confidence in his team to respond and get back in the league championship hunt.

“We’ve had two very good efforts. I can’t complain at all about the efforts with the guys which is the most important thing,” Kodama said. “The guys on the field gave everything they had. I am very happy with them.”

Kodama won back to back championships with the Indians in 2008 and 2009. He left coaching temporarily and

Will this year be a changing of the guard?

“We have a lot of potential. Pre-season we tried a lot of different things to see where we are at and I think our record reflects that,” Kodama explained. “We can still play better. It’s a good start. We can be a very good team this year.”

The two teams will play again at Crescenta Valley on February 1.