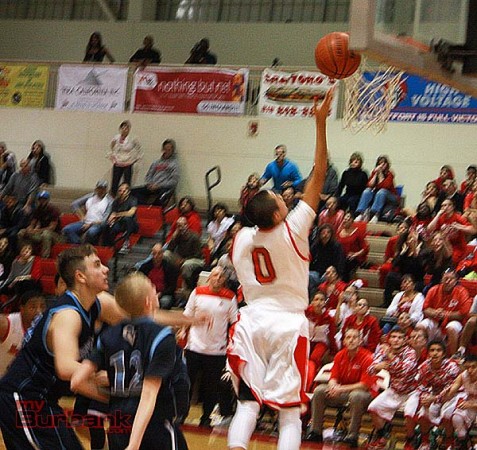 If you are a Burroughs fan and enjoy basketball, then Monday night was your night. If you were in attendance at JBHS, then your visit was worth the price of admission.

In two exciting and highly entertaining games, the Burroughs boys and girls basketball teams swept visiting Crescenta Valley to maintain their holds on to first place in the Pacific League.

For the first time since February 1, 2008, Burroughs defeated Crescenta Valley. It ended a streak of 10 consecutive wins for the Falcons against the Indians. It also marked the first home win for JBHS against CV since January 29, 2007.

“It was a very good team win. It was a big win to beat CV and protect home court,” Burroughs coach Adam Hochberg said. “We had a lot of guys step up and make big plays for us. I’m just excited and hoping to build on it and get better.” 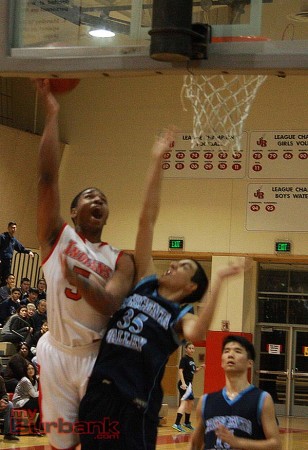 Amaad Wainright soars in for the layup (Photo by Dick Dornan)

“This was one of the hardest games I have played in so far. It was a good win,” added Amaad Wainright, who scored 19 points, snagged nine rebounds and had seven assists, three steals and two blocks. “I had some type of nervousness in me but I fought through it. We just have to prepare for the next game but I’m just proud of the team right now. We are doing well.”

From start to finish, both teams played at a high level of basketball. Burroughs (11-4, 3-0) broke out to a 15-12 lead after the first quarter and trailed 35-34 at the half after both teams stepped on the gas pedal in the second with a flurry of points.

Back-to-back three pointers by Chris Hovasapian and David Schwer gave the Indians a 44-38 lead early in the third quarter.

Wainright’s driving layup and free throw increased the lead to 53-43 with 2:12 left in the period. After CV’s Eric Patten cut the deficit to 55-51 on a layup, Burroughs pushed the lead to 57-51 after Wainright fed Rashid Ewing with an assist off a 2-on-1 fast break. 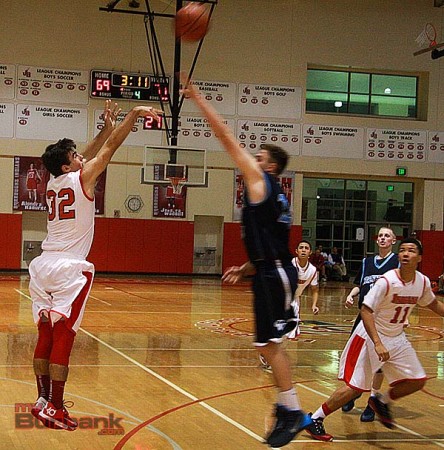 After forcing a defensive stop, Ewing and Wainright delivered the play of the game. Ewing threw a three-quarter court pass to Wainright who in one motion punched the ball on to a streaking Hovasapian for a layup at the buzzer and an eight-point lead, 59-51, after three quarters.

The magnificent play drew an eruption of cheers from the Burroughs faithful.

Crescenta Valley (8-7, 2-1) refused to go away and came back courtesy of the hot shooting from Berj Krikorian who knocked down three three-pointers to give the Falcons the lead at 64-63 with 5:21 remaining.

The next two minutes saw four lead changes capped off when Krikorian connected on another three to extend CV’s lead to 71-67.

Trailing 77-74, Burroughs rallied on a reverse layup from Hovasapian and a three-point play from Jakob Davis to regain the lead 79-77.

On the ensuing possession, Burroughs’ Steven Hubbell broke free from a double team and scored on a baseline layup with 14 seconds left to give the Indians an 81-80 lead.

After a CV missed shot, Ewing made one free throw to complete the high-scoring affair. 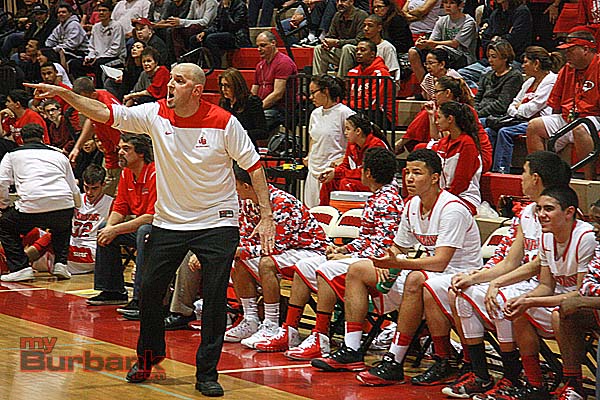 “It was a great league game and we knew it would be tough from the get-go because of how well they execute and run their stuff,” Hochberg said. “You have to be on your ‘A’ game. I don’t think we were on our ‘A’ game 100 percent. As the season goes on, the process is getting better. We are just trying to build and play a certain relentless style.”

Ewing scored 21 points and collected 10 rebounds and five steals; Hovasapian added 14 and Hubbell contributed with 13. Patten poured in 29 for the Falcons while Krikorian finished with 23.

In a dramatic turn of events, the Indians rallied from a seven-point fourth quarter deficit to stun the Falcons after trailing for most of the game. 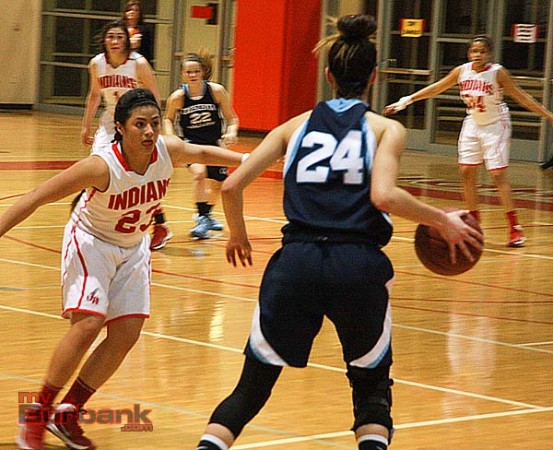 “This is the first time this year that we have won after being down the entire game. Fighting back, fighting back,” Burroughs coach Vicky Oganyan said. “This time we finally pulled it through. We always know we are never out of it because we play hard. The girls have good chemistry. Even if we are down 13 we never feel that we are out of it.”

Crescenta Valley (11-6, 2-1) increased the lead back to 10 at 39-29 with less than two minutes remaining in the third quarter. Back-to-back three-pointers from Paula Galicia brought the Indians back to within four but the Falcons responded to take a 44-37 lead into the final period. 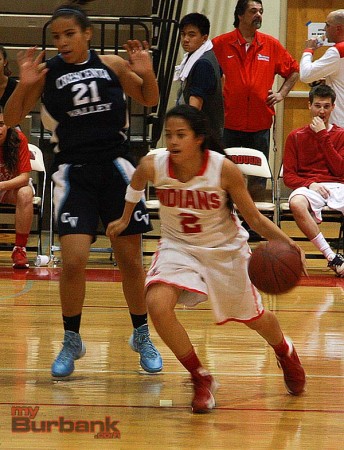 With things looking bleak for JBHS, Galicia sparked the comeback with two fast break layups to cut the lead to one, 48-47, with 2:12 left.

“She’s been playing awesome,” Oganyan said. “It’s the offense we’ve been missing so for her to put points on the board is a huge lift.”

Trailing 49-48, the Indians’ Davina Del Castillo made one of two free throws to tie the game with 42 seconds remaining.

Looking to regain the lead, CV threw an errant cross-court pass that Sidney Ortega intercepted and was immediately fouled. Ortega made the first free throw but missed the second to break the tie.

With 28 seconds showing on the clock, Crescenta Valley ran the clock down when Ella Stepanian took a top-of-the-key three-pointer that missed badly.

Burroughs’ Jakarra Waddell rebounded the miss with .3 left in the game and made one free throw to cement the two-point comeback victory.

Galicia finished with 22 points while Del Castillo had 11.

“Our motto is ‘Tough Enough’ so we fight until the end,” Galicia said. “Coach is like ‘never give up and fight to the end.’ The crowd was a big part of it and helped us out a lot. They pumped me and the team up.”

This Wednesday Burroughs will host Pasadena. The girls tip-off at 5 p.m. and the boys follow at 6:30 p.m.