Turns out that it was anything but as the Indians pushed aside the Falcons, 34-3, on Friday night at Memorial Field, and now await city rival Burbank in the “Big Game.”

The game was hard-hitting and somewhat close at the intermission as Burroughs led, 21-3, before adding two touchdowns in the fourth quarter.

“We felt like we were more physical,” Burroughs coach Keith Knoop said. “They had to matchup with our athletes. I think that our O[offensive]-line dominated.” 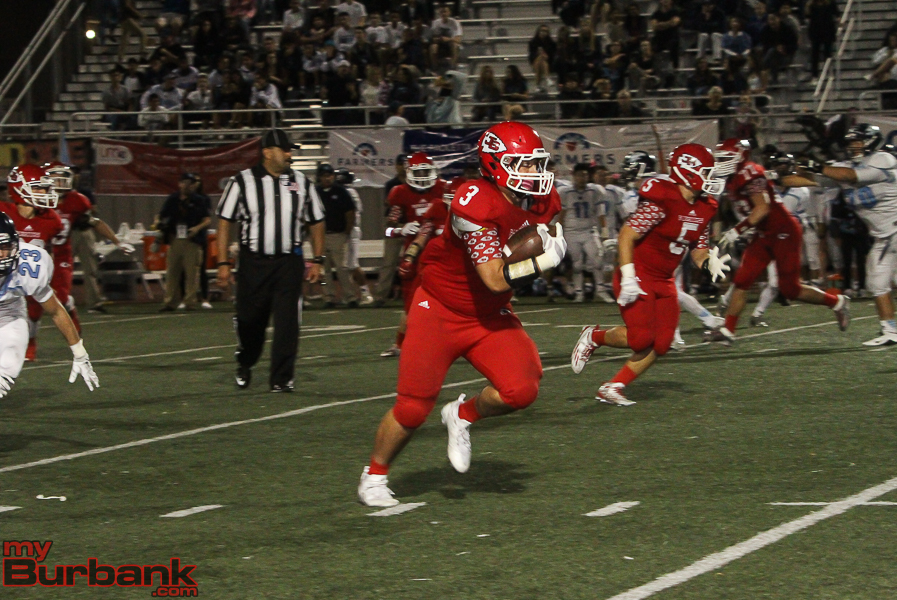 Senior linebacker Connor Garden races to a 35-yard pick for a score. (Photo by © Ross A. Benson)

Knoop also addressed the Burbank game. “We need to do what we do,” he said. “We need to take the emotion out of it. That doesn’t mean not to play with emotion. We do, but we don’t want to be too emotional.”

Junior tailback Chance Bell gained 38 yards on six carries after sustaining an injury to his right shoulder in the opening half. He didn’t play in the second half and will be evaluated. Bell is expected to play in the Burbank game.

Crescenta Valley (five turnovers) fumbled on its initial possession when senior wide receiver Ben Valdez was hit at the Falcons 36-yard line. What followed was a six-play drive that consisted of five runs including a 14-yarder from senior quarterback Steven Hubbell (12 carries for 12 yards) and 7:57 left in the opening quarter that made it 7-0. 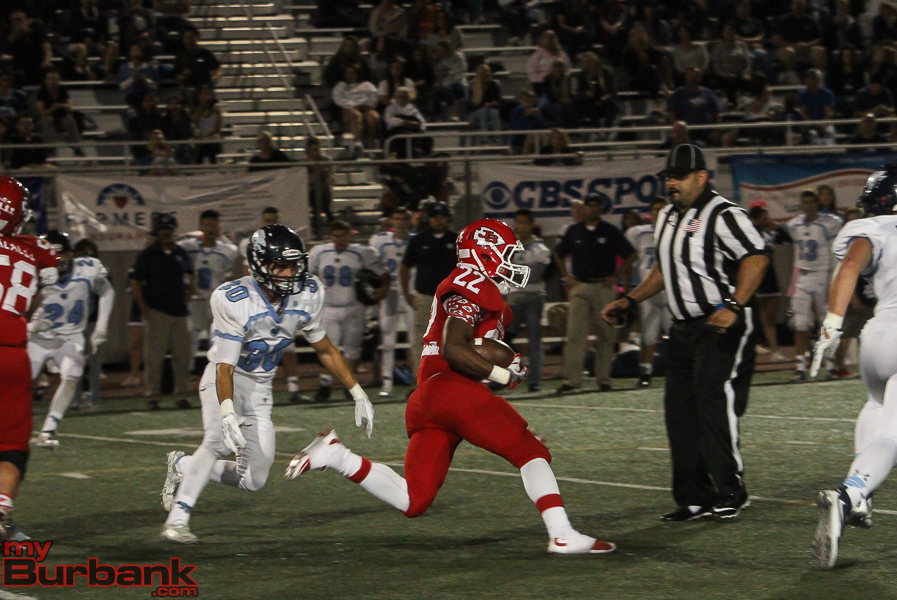 Hubbell’s 40-yard perfect spiral to senior wide receiver Erick Hernandez on the first play of the second quarter and 11:52 left capped an 80-yard, seven-play march that gave the Indians, who have an eight-game winning streak, a 14-0 edge.

“We strive to get better every week and we put in a lot of effort,” said Hubbell, who hit four of eight passes for 70 yards. “We need to focus on the game [Burbank] and keep your emotions in. We can’t have penalties and we need to do the basics. This week we can’t worry about all the social media stuff.”

The Falcons (6-3 and 4-2 in league) trimmed the lead to 14-3 with 6:24 remaining in the second quarter when junior Alex Atanackovic converted a 30-yard field goal. The drive began at the Crescenta Valley 29-yard line and concluded 12 plays later.

Burroughs (8-1 and 6-0 in league) responded with a dagger in the form of a 99-yard kickoff return by Robert Awungyanyi, who took the ball and weaved his way past the initial defenders and then found a little space and raced into the end zone.

“I think mostly I was able to score because of my blockers,” said Awunganyi, who also had a catch for 14 yards.  “I caught the ball at the one-yard and came out and saw a hole and took off.”

The Indians (one turnover) were now ahead 21-3 with 6:07 left before the break, but more importantly it seemed to take any momentum away from the Falcons, who came into the contest thinking they had a chance to knock off Burroughs.

After a scoreless third quarter, the Indians (230 total net yards) exploded for 14 points in the final quarter that included a 35-yard interception and score by senior linebacker Connor Garden of junior quarterback Tyler Hill with 11:09 remaining that made it 27-3.

The final tally was made possible after senior defensive back Hunter Guerin recovered a fumble by Valdez at the Burroughs 49-yard line.

The Indians churned out 160 yards on the ground as senior running back Ash Hawkins contributed 80 yards on 13 carries. The Falcons finished with 178 total yards.