Four musicals will jump from songbook to the stage when Burroughs Vocal Music Assn. presents its annual “Burroughs on Broadway” this weekend.

The show raises funds to help offset the costs of the program’s participation in local and national competitions, and it is the first performance of the year for the four award-winning choirs.

Choir director Brendan Jennings and Powerhouse choir student Brighton Thomas, 16, took a break from rehearsal to talk about the upcoming three-day show, which showcases songs from about 25 musicals.

The show is divided into four sections with each section featuring a different choir group. The Decibelles are doing songs from “Annie” while the Sound Waves are singing selections from the “Tarzan” musical. The Sound Sensations are performing “No, No Nanette” and Powerhouse is doing the finale piece –The Who’s rock opera “Tommy”.

The surprise ending for the Sound Sensations’ segment, Jennings said, is that all 60 women in the chorus will be tap dancing to the final song “I Want to Be Happy”.

“They actually all learned how to tap dance over the summer– the entire group,” he said. “So their rehearsals have been really intense. It’s a huge tap closer to the song. It’s going to be fun and we won’t need to mic the floor. That’s going to be really cool.” 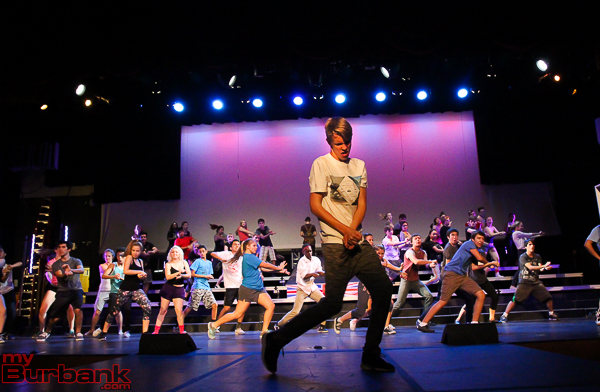 Originally there was an entirely different show planned the first week of school, but the students have been able to acclimate to the change of program that took place the second week of school because of their past experience in the program, Brighton said.

“We go to a three-day camp over a weekend,” she said. “There’s one full day and two half days, and then there are rehearsals and dedication.”

Powerhouse picks up material very quickly, Jennings said, because they have been through other choirs and are pretty well trained.

“They are good musicians and good dancers,” he said.

Students in Powerhouse are also highly motivated, said Brighton, who is playing the role of Tommy’s mother Mrs. Walker.

“It’s a great commitment, so if you are not willing to put everything forth, you won’t be able to do it,” she said. “Everyone here is really willing to do this — we love it!”

The Powerhouse choir comes to school for a 7 a.m. rehearsal that lasts for two hours every morning, Jennings said.

“It’s a phenomenal group of student,” he said.

There is a total of 216 students in all four groups and 59 of those are in Powerhouse. Actually 60 in Powerhouse for this production as Mason Mahay, 10, a Bret Harte fourth-grader is playing young Tommy. He is the brother of Madison Mahay, 16, who is in the Sound Sensations choir and will play the role of Nanette.

“Tommy” is a complex piece in that the students are asked to play a lot of different emotions. It’s not a happy story, Jennings said. Tommy as a child witnesses a traumatic event and after that event, he is in a catatonic state. Then he is abused by all the people around him.

As the show’s lyric goes, Tommy becomes a “Pinball Wizard”.

“It’s easier to play those nicer characters and this is a dark production and the students are having to play meaner, darker characters,” Jennings said. “Then the mood switches. He wakes up from the catatonic state and he’s this total rock star.”

Tommy’s mother wants to know how this kid that they thought was deaf, dumb and blind is this amazing talented person on the pinball game, Brighton said.

Then people become obsessed with him and there is this crazy fan/disciple kind of thing, and Tommy rejects them, and they reject him and it’s an up and down, rollercoaster ride of emotions, Jennings said.

Exploring emotions that are all over the map give students experience for future roles they will be portraying in shows throughout the rest of the year.

“We are concurrently working on classical repertoire in here and Powerhouse has already performed many of those,” he said. “This is a good style vocally to set them up and solidify technique and ensemble and it’s also great to delve into text and emotion and getting the story telling down. When we go to the popular music in the spring, sometimes it’s harder to find the depth in that music but now we’re really getting used to looking at the text and the story and what’s going on.”

“And because ‘Tommy’ is a rock opera,” Brighton interjects, “the music has a little bit more of a pop twist to it more than our other shows do, so that is really helpful for our future shows, that we are able to work with acting as well as that sound rather than just the classical sound, so we can figure out how to perform in a real professional way with a pop song.”

Brighton, a junior, believes the two years in choir at Jordan Middle School and three years in choir at Burroughs, have helped her grow in her performance. Early on, she said, she was very nervous and would stand on stage and not be open to putting everything into it.

“This has helped me so much!” she said. “I have [received] a lot stage experience with all the rehearsals and performances that we do and I’m so much more comfortable in front of an audience. I’ve learned a lot of things about working with people because we work with 60 people. It’s important to learn how to work with different personalities. I love it. I wake up and I’m happy to do it at 7 a.m.”

She has found that she applies musical techniques learned in choir to her general education classes.

“What I’ve learned in choir has helped me in my English class, because we analyze text like the lyrics we sing in choir,” she said. “In English class we’ll be analyzing a paper or an essay and I’ll think about where the punctuation is placed in an essay and it reminds me of when to breathe in a song or understand what the author was trying to say. I just recently realized that.”

Choir experience has also helped her stay organized throughout the school year.

“It’s a learning process to figure out how to organize — balance school and choir,” she said, “but once you figure it out, it’s good.”

When the students are in school. they don’t realize how much is being asked of them, Jennings said.

“The expectations are so high just because of the legacy of the program, and the students live up to it and they are always trying to do better than before, better than the group that came before them and I think it’s kind of like they don’t realize how far and how crazy it is what they are doing because it’s what is expected,” he said.

“It’s just you and your friends in a class,” Brighton adds. “It doesn’t click until later, this is a big thing.”

Then the students go on to college and other things, Jennings said.

“They pretty much unanimously come back and say ‘This experience over prepared me for anything that I could have encountered and I learn faster and I process quicker and I have this capability to keep long, hard hours and know how to not give up and how to accept rejection because it’s competitive,” he said.

Choir students are also expected to do well academically, Brighton said, they know they can’t slack off.

Brighton added, that if you have the best voice but you show up late to all your rehearsals, you don’t have the material learned and slack off — nobody wants to work with you.

“And that’s just bad for you,” she said. “Why would you do that to yourself?

In addition to the choirs’ performance, there will be individual students and small groups showcasing other well-known Broadway tunes while interacting with the audience cabaret-style. Premium reserved cabaret seats include a reception buffet prior to the show, and dessert/drink service at one’s own table during the intermission.

It’s a lead-in to the high school choir program.

Brighton also was a part of that, she said.

“I was able to come during some rehearsals and I got to meet people and see what goes on behind the scenes, which is really helpful for the next year going into it, and it’s really fun,” she said.

“Burroughs to Broadway” performances are at 7 p.m. Friday and Saturday and at 2 p.m. Sunday at the Burroughs Auditorium, 1920 W. Clark Ave. Tickets are on sale at www.jbhsvma.com.