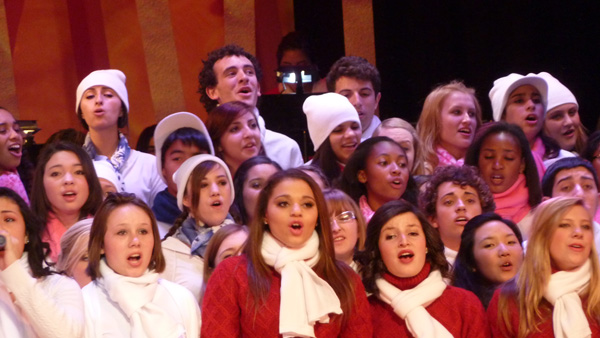 The combined vocal and instrumental departments of John Burroughs High School are presenting the community with a very special musical treat for the holiday season.  Holiday Spectacular 2011 will be a performance filled with the seasonal sights and sounds of the award winning music departments of the school.

The auditorium stage will be home to choirs: Powerhouse, Sound Sensations, Sound Waves, Decibelles and the Vocal Ensemble along with the Concert Band, Big Band and selected instrumental and vocal solos. They will be performing a diverse selection of holiday music featuring classical lyrics to contemporary  big band sounds, from Christmas to Chanukah to New Years  reveling which will leave the audience filled with the holiday spirit. The theme throughout the second act of the performance will be warm weather holidays celebrating those who’s holiday’s do not revolve around ice and snow! There will also be vocal soloists performing with the Big Band and soloists with acoustic guitars.

A guaranteed highlight will be the numbers when the combined choirs and bands unite onstage, with over 300 students performing together!  The Vocal Music Association is under the direction of Brendan Jennings and the Instrumental Music Association under the direction of Tana Barnett.  Both teachers at John Burroughs High School are proud to unite all their students in this festive performance.  The Holiday Spectacular 2011 is under the creative direction of Scott Dove and supported by Jon King and the Burroughs Tech Crew.
In keeping with the tradition of the choir, the performance will end with alumni invited up onstage to join in with their rendition of Silent Night, which features a special solo by a specially selected senior student.

General Admission to Holiday Spectacular 2011  is $15 for adults, $10 for students and seniors. Reserved seating is $25. Due to the large amount of students performing, the seating is limited and are assigned on a first come, first serve basis!  So reserve your seats now!  Tickets can be purchased online at www.jbhsvma.com  or www.jbhsima.org For questions about the performance, call (818) 370-5567.

BUSD Adopts Several Resolutions at Board of Education Meeting