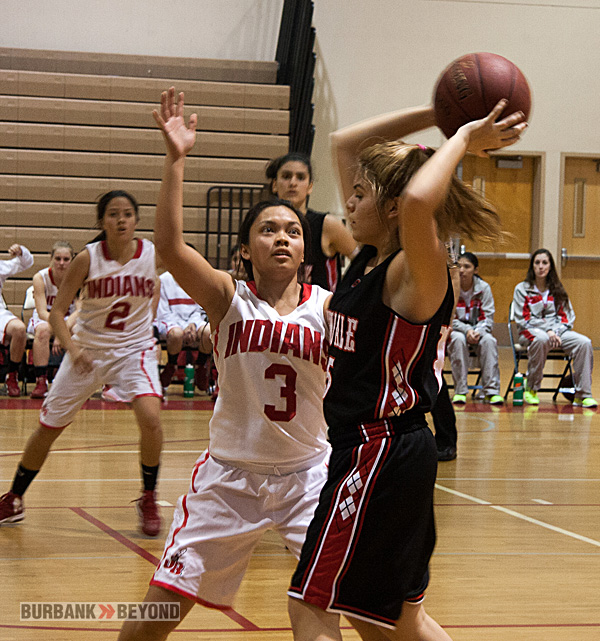 Aysia Shellmire scored 16 points to lead Burroughs to a 60-44 victory against Glendale on Senior Night. The Indians remained tied for first place with Arcadia with two weeks remaining in the regular season.

Seeking to stay on pace for its first league title since 2011, Burroughs came strong out of the gate taking a quick 8-2 advantage en route to a 16-5 lead at the end of the first quarter.

Shellmire, who grabbed six rebounds and blocked six shots in the game, scored six points in the quarter including back to back baskets on beautifully executed high-low passes from Jakarra Waddell.

“At the start of the game we came in focused. We did our game plan and people made shots,” Burroughs Coach Vicky Oganyan said. “Anytime we have a good start to the game it helps our confidence.”

Waddell had an offensive rebound put-back that gave JBHS a 20-8 lead with 3:08 left in the second quarter.

The Indians powered their way to the basket time and time again scoring their first 22 points of the game in the key.

Sophomore Davina Del Castillo knocked down a 15-foot jumper from the right wing for the first points outside the paint that made it 24-11. A steal and subsequent 17-foot jumper at the buzzer by Delaney Nicol gave the Indians a commanding 26-11 lead going into halftime.

Shellmire, one of four seniors on the JBHS roster, scored the opening basket of the second half on an assist from Nicol that gave Burroughs a 17-point lead. Despite being only a sophomore, Nicol’s poise and steady play at the point guard position has benefitted the Indians.

“The team backs me up and they are always there for me. It feels good to know you have a team behind you,” Nicol said. “It gives me more confidence when I know I have more people to pass to.”

Glendale, which upset co-leader Arcadia in the first round of play, responded with a 9-2 run to cut the deficit to 30-20.

Waddell’s driving layup in the middle of the key capped off a 6-0 run by the Indians to close out the third quarter with a 36-20 lead.

Burroughs pushed the lead to a game-high 20 points after Del Castillo made a soft four-foot jumper with 5:12 left in the third quarter. The 44-24 lead looked insurmountable but Glendale refused to go away.

The Nitros went on a 10-0 run before Nicol converted a three-point play after being fouled on a strong drive to the basket with 1:53 remaining in the contest. The bucket broke a three minute drought by the Indians and gave them some more breathing room leading 47-34.

“My coach kept telling me that if I see a lane to just take it. She’s been telling me that for a long time,” said Nicol, who is celebrating her 16th birthday today. “So when I saw it I just took it. I saw a clear lane to the basket and I just went in and made the shot. I knew that we needed points to stop their momentum.”

Glendale made one final challenge when Ellin Avanessian swished all three of her free throws after she was fouled on a three-point attempt with 33.8 seconds left on the clock. Trailing 49-41, the Nitros were forced to foul in hopes the Indians would struggle at the foul line.

That would not be the case as Burroughs connected on eight-of-nine free throws down the stretch to secure the 16-point victory. The Indians were outstanding in the final period going 12 for 13 from the charity stripe.

“Glendale is always a dangerous team. It doesn’t matter what year it is or what talent they have,” Oganyan said. “They always have a great game plan and the team plays hard. It was a dangerous game on our schedule but we found a way to win.”

Burroughs travels to Pasadena on Monday for a 5 p.m. tip-off.