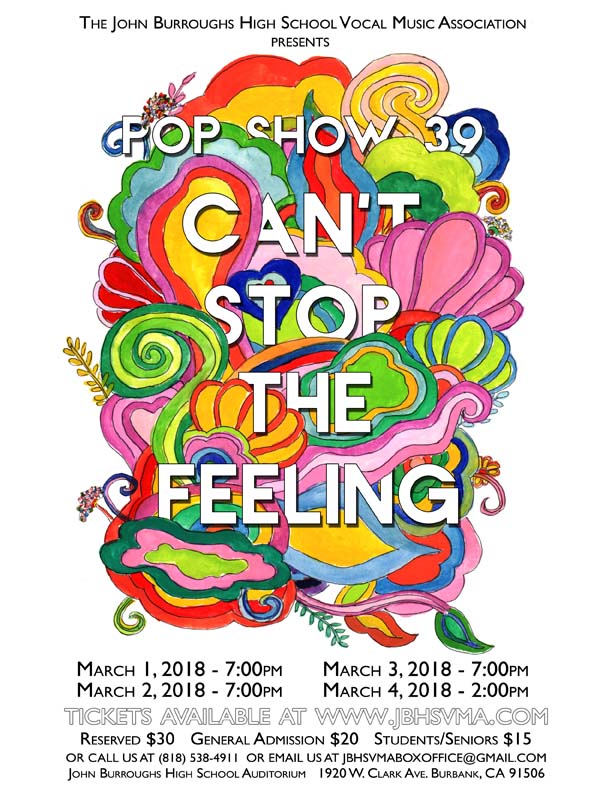 In addition to the VMA’s five competition choirs performing their highly anticipated 2018 competition sets, “Pop Show 39” will also feature a variety of small groups, duos and soloists performing music and choreography they have chosen themselves, as well as a special performance by the VMA’s Dance Ensemble. In total, “Pop Show 39” will feature over 200 students from the JBHS VMA, as well as the talents of select students from the Burroughs Instrumental Music Association and the JBHS Tech Crew.

Along with Pop Show 39, the JBHS VMA has an incredibly busy Spring, competing in numerous regional competitions; traveling to Orlando, Florida to compete in a national showchoir competition and hosting its own Music Showcase event   on April 13th and 14th where over 60 choirs will compete over the course of the two-day event. The choirs’ 2018 season will finish on May 17th with the presentation of its annual Spring Concert.

The John Burroughs High School Vocal Music Association includes five competitive show choirs, involving over 200 student choir, tech and musical performers.  The program’s advanced mixed choir, POWERHOUSE, has long been recognized as one of the nation’s finest show choirs. An inspiration for the television series “Glee,” POWERHOUSE was invited to perform on the Oprah Winfrey Show in 2010 as a representative of the modern high school show choir phenomenon. In recent years, POWERHOUSE has performed opposite the cast of “Glee,” Christina Aguilera, John Legend, Stevie Wonder, Steven Tyler and Joe Perry, Harry Connick, Jr., and Foreigner. Additionally, the group was featured in “Gleeful: The Real Show Choirs of America”, a British documentary as well as profiled on the “CBS Evening News.” The choir has performed at the famed Hollywood Bowl, and has traveled to a variety of cities around the U.S., as well as to China on two occasions to perform in the internationally televised Chinese New Year Parade and other prominent events.

Launched in the Fall of 1978, by Mary Rago, who at the time was the vocal music director of John Burroughs High School, the JBHS VMA was one of the nation’s very first competitive show choir programs. Rago was succeeded as director in 2006 by her former student, Brendan Jennings, who is assisted by artistic director, Jen Oundjian; musical director, Dan Scoville; and a team of talented choreographers.