The Indians have played well in major tournaments, which are often indicators of what a team is capable of.

Saturday the Indians played the way they have in tournaments, easily bouncing visiting Valencia 25-21, 25-16, 25-19 in the quarterfinals.

Last season the former Foothill League rival knocked the Indians out of the playoffs in the semifinals.

“We played like that when we went up to Santa Barbara. I think the guys understood the urgency of the situation,” Burroughs coach Joel Brinton said. “Today we started to get dialed in. This is a good time to start doing that.” 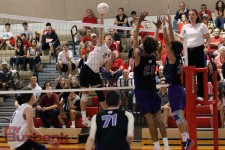 With the win Burroughs will play at South Pasadena, which upset second-seeded Laguna Beach, on Wednesday.

“Everyting was clicking today,” Burroughs setter Ryan Van Loo said. “I think we had a big surge of energy. The passing was on the hitting was on. The passes made my life easy.”

Burroughs (29-5) was locked in a tight battle with Valencia and didn’t take its first lead in the match until 15-14 of the first game following a block from junior Jarrett Malone.

Valencia came back to tie things at 18 before the Indians took over. Burroughs took advantage of a Valencia error followed by kills from Bailey Carter and Van Loo to go up 21-18. Cameron Capili, who finished with 12 kills, provided the kill to clinch the first game.

Burroughs was much more confident in the second game and cruised to victory. Andrew Dalmada, who had a team-high 14 kills, put down the clincher.

Valencia went up 10-9 in the third, before Burroughs fought back to take a 15-10 lead. Valencia had a few errors in the run and Van Loo had a kill and a block. Valencia fought back to make it as close as 17-15. But Burroughs put together another run. Dalmada, Connor Ludlum, Bailey Carter and Van Loo had kills in the run to push the advantage to 23-16.

Dalmada and Capili each had seven digs. Van Loo had eight kills, three blocks and 31 assists. Carter had four kills.