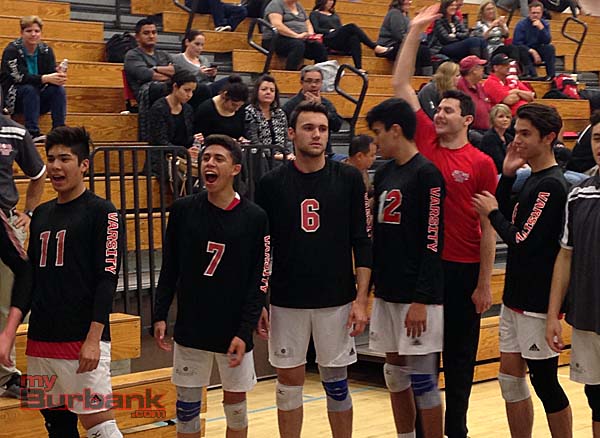 Friday night the Indians ran into an opponent that was ready for battle.

Playing at Crescenta Valley, the Indians, who are ranked No. 3 in the CIF Southern Section Division 2 poll, were definitely pushed.

“We try to treat every match the same and respecting our opponents every single time, but I do think that having a competitive edge from CV was kind of like a wake-up call for the playoffs for when they come around,” said Andrew Dalmada who led Burroughs with 18 kills. 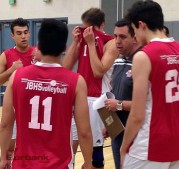 Burroughs (14-1 overall, 7-0 in league) had to fight for every point in the first three sets.

The Indians appeared to be on the verge of winning the first set when leading 23-20 following a kill by Cameron Capili.

But the host Falcons (10-9, 4-2) fought back and actually held the lead at 26-25 and 27-26. Burroughs finished off the first set with a block from Bailey Carter, followed by a kill from Connor Ludlum.

The second set was also intense. CV led 15-10, before Carter brought his team back with three kills and a block in short run that saw Burroughs tie the score at 16.

But Crescenta Valley did not go away. The Falcons held a 24-23 lead, before a kill by Dalmada kept the Indians alive.

After both sides were tied at 25, Burroughs finished things off with kills from Carter and Capili. Capili finished with 12 kills. Carter had seven kills and six blocks.

Even being down two sets would not derail the Falcons. They led 22-20, before Burroughs’ Skyler Bercini served back-to-back aces. Bercini also had 22 digs.

But a kill from CV’s Brett Dunkin and a block from Paul Kim extended the match into a fourth set.

“There were times when it was a down game for us and we weren’t playing Burroughs volleyball,” Dalmada said. “But I definitely think at the end of game two and end of game four we definitely played our game.”

Dalmada proved to a difference maker in the fourth set, when he had six kills, many of which were at crucial points that dictated the momentum.

Setter Ryan Van Loo, who finished with 40 assists, appeared to have sealed the match for his team with Burroughs up 24-17. But he was called for a lift violation and shown a red card for what the referee deemed unsportsmanlike conduct. In volleyball a player is ejected following two red cards.

Van Loo, who had momentarily began to celebrate the victory, was able to gather himself back together as he had a block on the match-clinching point.

Both sides will play again May 3 at Burroughs.