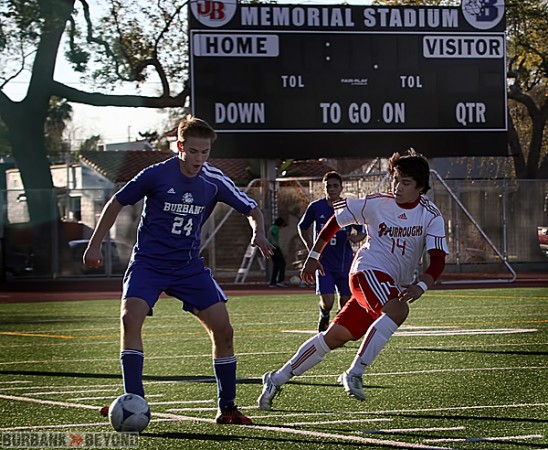 Burroughs took the first game of this season’s rivalry (Photo by Ross A. Benson)

Friday’s boys’ soccer match between Burroughs and Burbank was decided in the blink of an eye. Thirty seconds to be exact. That’s how long it took the Indians to score the game winning goal….at the beginning of the game. 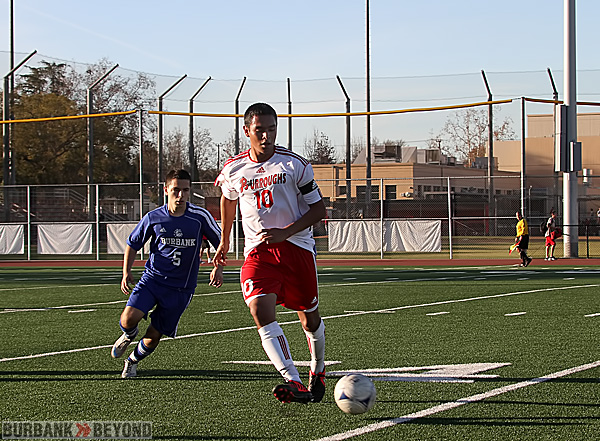 Senior forward Manny Celio fired a majestic shot into the upper-left corner of the net to give the Indians a 1-0 lead that they would not relinquish in their first of two rivalry games this season against the Bulldogs.

With the victory, Burroughs took over first place in the Pacific League with 15 points followed by Crescenta Valley (14 points) and Pasadena (13 points).

After the referee blew the whistle to signify the start of the game, Burroughs’ Michael Conrad spotted Noberto Alcantar wide with a nice ball. Alcantar promptly flicked the ball to Celio who took a 30-yard shot that found the back of net only 30 seconds into the contest.

“I got a good look at the goal and it crested into the corner of the net,” Celio said. “It was a nice shot.”

“It was a brilliant goal,” Burroughs Coach Mike Kodama said.

“It was a beautiful goal. Not much you can do about that,” Phan said. 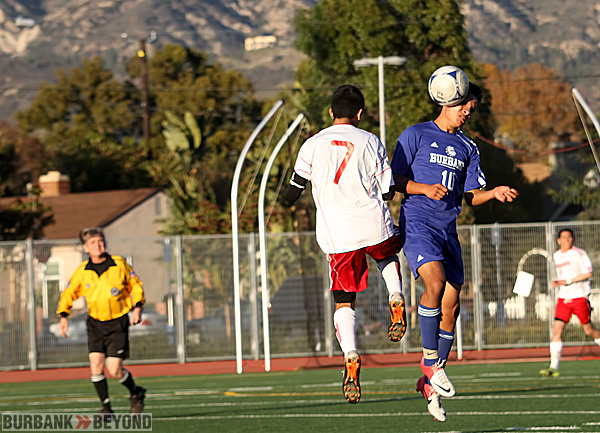 The Indians and Bulldogs battled throughout the game (Photo by Ross A. Benson)

Burroughs subsequently dominated most of the match with tremendous touch-passing reminiscent of the Spanish national team. The Indians had multiple opportunities to score but the outstanding goalkeeping of Burbank senior Galust Galstyan and the strong defense of the Bulldogs prevented any more scores.

Galstyan started only his second game of the season and played like a veteran. He made nine saves while giving BHS hope to pull off an upset.

“I thought he played terrific,” Phan said. “After the first goal, that could have been the game. We could have given up but I told my guys that’s why I like coaching. We fought to the end. It doesn’t matter what the score is but how you play. I’m proud of our guys.”

The Indians controlled time of possession as well as field play. Seven minutes into the match, Brandon Gerlach took a wide open shot that Galstyan denied. Gerlach had another chance to put JBHS up by two goals in the 42nd minute but again Galstyan made a nice save.

Too many missed opportunities cost Burroughs to put the game away and kept Burbank within striking distance.

“We had a tough time in the penalty box. Part of that is the rivalry game,” Kodama explained. “Burbank plays extremely hard. I have known Loi Phan for many years and I wouldn’t expect anything less. So we had to work for every single opportunity we got. Their goalkeeper was outstanding and their two center defenders were there all the time. That makes it really hard to break down a team like that.” 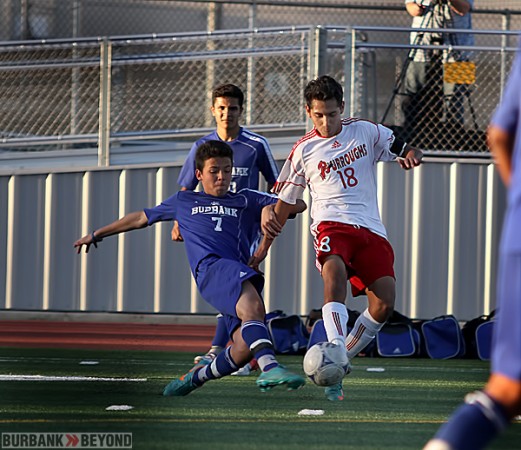 The rivalry resumes on Feb. 7 at Burbank (Photo by Ross A. Benson)

Burbank had a golden opportunity to tie the score at the 63rd minute when the Indians’ Nicholas Lucero lost the ball to Dennis Palacio who broke free and had what appeared a clear shot on goal.

However, Lucero recovered and forced Palacio away from a shot. That was as close as the Bulldogs would get.

“I’m proud of when your rival coach comes over and says, ‘you guys don’t quit, do you?’ You can sleep better at night knowing that,” Phan said.

“Seven more to go. We are in position. We are right there battling for first,” Kodama said. “We just have to stay focused and go one game at a time.”

“We have a really good squad right now. If we keep working hard, I think we can go really far,” Celio added. “Maybe even take league.”

The Indians are half way there.