Nothing comes easy deep into the CIF Southern Section playoffs.

The Burroughs High water polo team knew that Saturday when the Indians hosted Jurupa Valley in a Division 5 quarterfinal match.

If one thing was evident, it was that Burroughs made things tough for the visitors and came up with a 16-8 victory.

“We knew who their top offensive players were and we adjusted our defense to play around that. I felt we did exactly what we needed to do,” Burroughs coach Jacob Cook said. “All around we had great play today.” 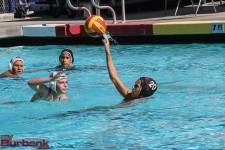 Burroughs (23-6) will play La Canada High Wednesday in the semifinals at 5 p.m. The site of the match will either be at Burroughs or at Pasadena City College.

The semifinal appearance is Burroughs’ first since 1998 when the team was led by current UCLA assistant coach Jason Falitz and lost to 11-6 to Santa Monica in Division III.

Jurupa Valley (25-7) surprised Burroughs with the first goal of the match on a quick counter attack.

But that was when Burroughs stepped up the defensive pressure.

The Indians came back and tied things when Aram Nordanyan scored on a pass from David Arakelyan at the 5:41 mark of the first quarter. Less than a minute later Burroughs took the lead for good when Arakelyan scored on a shot in the left corner.

Jurupa Valley came back to score two quick goals and Burroughs went into the halftime break with a 4-3 advantage.

But the in the third quarter Ambartsumyan took over. The junior scored four straight goals to help the Indians go up 8-3. A goal by Arakelyan stretched the lead to 9-3.  Burroughs led 9-4 going into the fourth quarter.

“Once he’s on, he’s on. He just had a very on quarter,” Cook said of Ambartsumyan. “We had a rough second quarter, but I think they learned what mistakes they made and moved on from there.”

Ambartsumyan said at halftime his team knew something had to change.

“The third quarter we all came and got our heads together,” he said. “We wanted to step it up because the score was getting closer. We all played smart defense and starting scoring.”

The match shifted in the fourth quarter as it went from being a man-to-man battle to a wide-open affair as fatigue took over.

Burroughs got two goals each from Arakelyan, Ambartsumyan and Marko Vucetic in the fourth quarter. Nordanyan also added a goal in the final period.