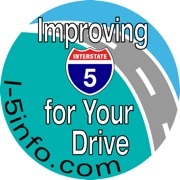 EMPIRE AVENUE CLOSURE UPDATE: Empire Avenue in Burbank will be closed between Wilson Avenue and Victory Place starting August 1, 2016, for approxi-mately three weeks. Additional closures of several weeks in duration will continue through November 2016. These closures are necessary for bridge construction. Closure updates will be provided as the work progresses. Click here for more information.

Work will occur during daytime hours unless otherwise noted.

K-Rail Removal: Northbound and southbound I-5 between SR-134 and Magnolia Boulevard. This work will occur the nights of August 4 and 7.

+ Through mid-2017 there will be intermittent daytime bike path closures between Riverside Drive and just south of the SR-134 overcrossing in the City of Los Angeles. When the path is closed, a signed detour will direct users to Zoo Drive and Western Heritage Way. See map here.

+ Up to two lanes of northbound and southbound I-5 will be closed between SR-134 and Magnolia Boulevard the nights of August 4 and 7, 10 p.m. to 6 a.m. Intermittent ramp closures may occur in this area as well. Consecutive ramps will NOT be closed.

+ Intermittent full closures of Empire Avenue between Wilson Avenue and Victory Place starting August 1 through November 2016. Closures will last for approximately three weeks, and then the street will be reopened for two to three weeks before the next closure. Work hours will be from 6 a.m. to 4 p.m., primarily Monday through Friday. During closure periods, the street will remain closed day and night. A detour will be posted. Click here for more information.

+ Intermittent nighttime lanes closures on southbound I-5 between Hollywood Way and Burbank Boulevard.