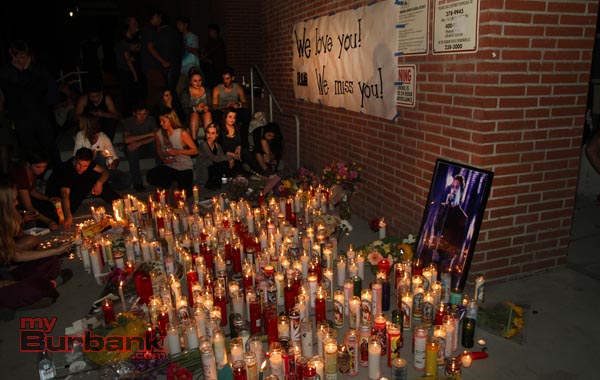 A powerful and emotional candlelight vigil was held in memory of Jake, Ian and April (Photo by Ross A. Benson)

A memorial was set up just outside the main office at Burroughs where students by the droves came by to pay their respect. A chaplain presided at the beginning of the vigil at 9:30 p.m. offering words of encouragement, providing spiritual guidance and reciting the Lord’s Prayer with those who came. Three red candles were lit representing each of the victims. 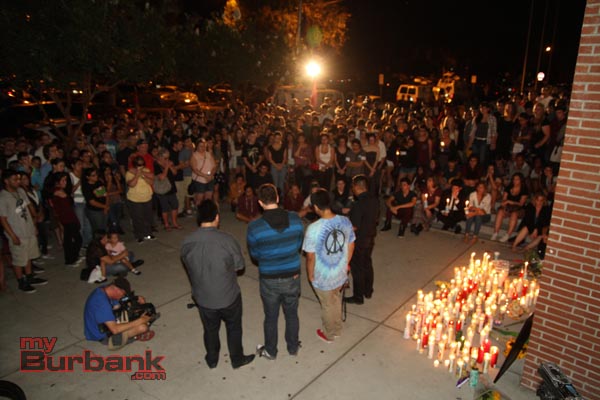 The crowd of mourners grew throughout the evening (Photo by Ross A. Benson)

As the evening progressed and the crowd swelled, candles and flowers were placed at the Memorial and students and alumni signed posters with words of remembrance, love and affection for Gnasso, Bulbenko and Townsend.

Plenty of tears and hugs were shared throughout the emotional vigil as friends and peers struggled to cope with the shocking deaths of three loved ones.

“We have been dealing since late this afternoon with the tragedy of the families here and it’s just been a lot of mixed emotions,” Burroughs Principal John Paramo said.

According to the California Highway Patrol, the three victims along with Zachary Maina and Timothy Gorman were a part of an accident that occurred at approximately 2 a.m. at Sierra Highway and Rush Canyon in Santa Clarita.

The five teenagers, all of whom were 19 years old and 2013 graduates of Burroughs High School, were in a red Chevy Silverado truck when it veered off the road and rolled down a hill for more than 200 feet into a canyon. 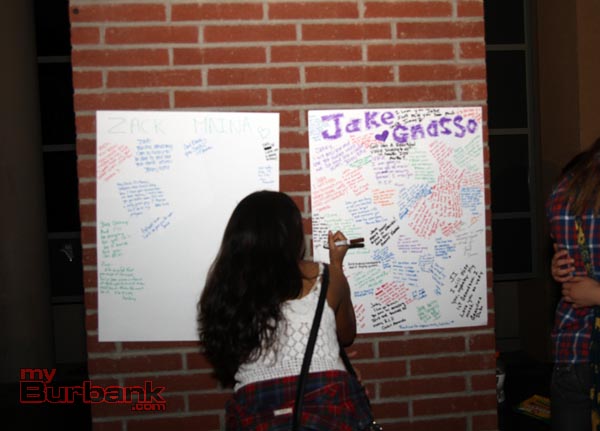 A friend writes her condolences on a poster dedicated to former Burroughs football player, Jake Gnasso (Photo by Ross A. Benson)

Three people were pronounced dead at the scene when paramedics arrived at 7:30 a.m. Maina and Gorman, one of whom made the 911 call hours after the crash, are currently hospitalized with moderate injuries and are expected to make a full recovery.

Gnasso played football for Burroughs two years ago as a wide receiver/cornerback. Townsend was the cousin of current Indians quarterback Andy Amela.

Behind a sterling and inspiring performance by Amela, Burroughs defeated Rosemead, 45-17, last night despite the pain and heavy hearts that the players carried around. The Indians’ resiliency shined brightly during the most difficult of times.

“We have really good kids here at John Burroughs High School. This is indicative of the students here,” Paramo said. “I’m very proud of them.” 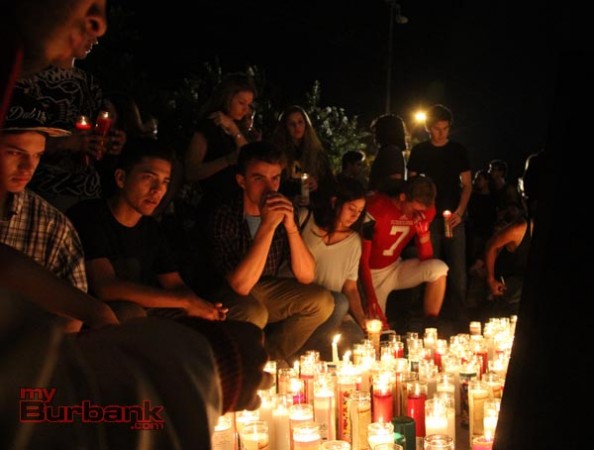 The unfortunate incident follows the horrific fiery car crash that took the lives of five Burbank teenagers less than a year ago on September 28, 2013. Tragically, the Burbank and Burroughs communities mourn again the loss of young adults at too early an age.

At this time law enforcement does not know the reason behind the accident as the investigation continues.

What we do know is that the Burbank community has caring hearts and strong love for one another. Through the toughest of times, the city of Burbank has always and will continue to prevail through strength, faith and support.

Life is too precious. Love one another each and every day of your life. We are one. We are Burbank. We are Burroughs.

A friend writes her condolences on a poster dedicated to former Burroughs football player, Jake Gnasso (Photo by Ross A. Benson)

The crowd of mourners grew throughout the evening (Photo by Ross A. Benson)

A powerful and emotional candlelight vigil was held in memory of Jake, Ian and April (Photo by Ross A. Benson)