Saturday night was apparently not a good time to park your car in the IKEA parking structure located at 651 N. San Fernando Blvd.  One or more thieves broke into four cars there, and one more parked a block away at the Corner Bakery, 800 N. San Fernando Blvd.  The rash of auto burglaries continued on Sunday, when police took four more reports for cars broken into at the Island parking structure, 133 E. Orange Grove Ave. 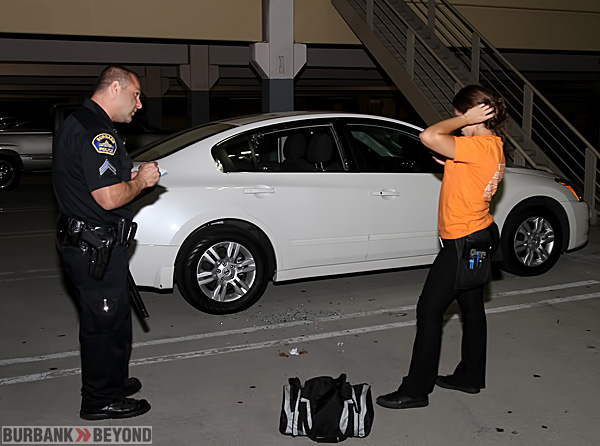 Burbank Police Officer Steve Karagiosian takes information from one of the victims, after finding her car broken into in the IKEA parking structure. (Photo by Ross A. Benson)

Burbank Police responded to the first report of a car with a smashed window and missing valuables at 8:15 p.m. in the parking structure.  A 2012 Kia Sorrento had a smashed rear passenger window.  A shoulder bag containing an iPad was taken.   The second burglary in the parking structure was reported at 9:45 p.m.  A 2012 Honda Civic had its window smashed sometime between 9 p.m. and 9:45 p.m.   Missing were laptop computer accessories and textbooks.

A 2012 Nissan Maxima that had been parked in the structure since 5 p.m. was found with a smashed window at 10 p.m.  Thieves took a gym bag containing an iPod.   At 11:45 p.m. the owner of a 2010 Infiniti G35, returned to find the rear passenger window smashed.  The vehicle had been parked there since 6:16 p.m.  The owner reported that nothing was missing from the car.   The cars that the thieves targeted had been parked on various levels of the multi-level parking structure. One belonging to waitress at Chevy’s restaurant, was parked on the top level of the structure.  Others were on lower levels. 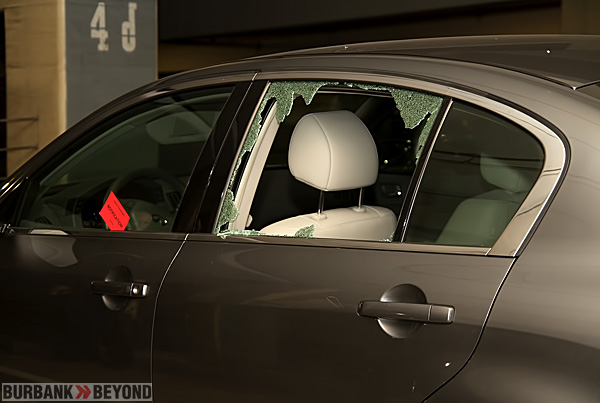 The fifth auto burglary occurred at the Corner Bakery.  It was reported at 9:55 p.m.  The owner of a 2013 Nissan Versa had parked the vehicle there at 8:30 p.m.  A window had been smashed, and a purse, camera, and iPod were taken.  If it was the same thief or thieves, it appears they may have broken into this car on their way back from hitting the cars at the IKEA parking structure.

Police did report that a resident in the area of Frederic St. and Pacific Ave., called them after finding some purses.  It is believed that they may have been part of the loot taken from the cars that were broken into Saturday night.

On Sunday between 11 a.m. and 2:30 p.m., Burbank Police responded to four more auto burglaries at the Islands restaurant parking structure.  Each of the vehicles had the rear passenger window smashed, and valuables inside the car taken. According to police department spokesman Sgt. Darin Ryburn, this could be the work of the same thief or thieves.    More details on these latest thefts were not yet available.

Police advise citizens to not leave valuables in their cars.  If you must leave something inside when you park, do not leave it in plain sight. 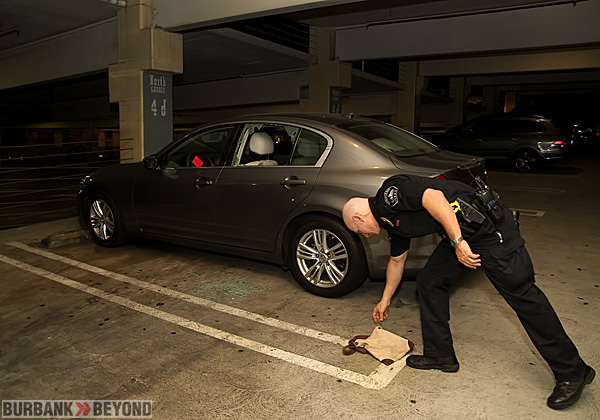 Burbank Police Officer Bruce Slor recovers property that was left behind on one of the car burglaries that occurred this weekend in the Ikea Parking structure. (Photo by Ross A. Benson)