On Tuesday, March 13, at 2:30 a.m., Burbank Police received reports of two men using flashlights to look into parked cars on the 700 block of Priscilla Ln. When police arrived at the scene, two men who fit the description were detained and searched. 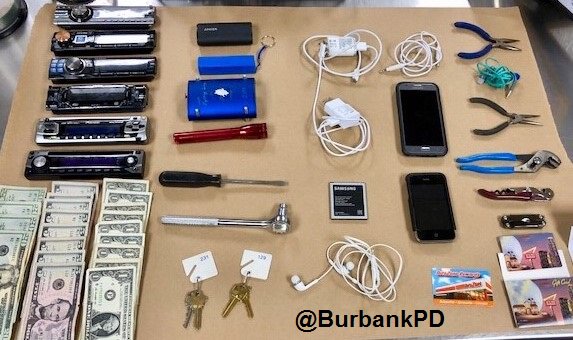 Police discovered the men possessed stollen IDs and credit cards, as well as burglary tools, including multiple wrenches, pliers, and a screwdriver. Timothy Montgomery, 20 of Panorama City, and Niryn Mitchell, 19 from Los Angeles, were arrested in connection to thefts reported in the surrounding area.

Officers who had been working on the investigation of recent theft in the area identified several objects that came from the victims’ unlocked vehicles which were parked on the 800 block of North Rose St., the 600 block of Priscilla Ln., and the 500 block of Toluca Park Dr.

Both suspects Mitchell and Montgomery were released from custody and are due to appear in court on March 29.